Sunday, December 11th. Spurs lose on a ubiquitous "rainy away night to Stoke." Record-tying unbeaten streak? Ended. Match officiating? Laughable. Our position in the top four? Tenuous. And yet it is not missed penalty shouts or the slow start that's on my mind. Rather, I'm thinking about a 21 year-old Spurs center forward who played 10 games for Spurs in late Edwardian London. I'm thinking about Walter Tull. 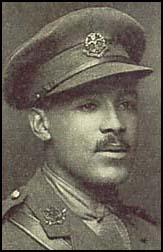 If you've read my previous pieces on CFC, you know my curiosity lies in prodding the sociocultural implications surrounding Tottenham Hotspur - their decision to build a new stadium in a riot-riddled neighborhood in North London, the question of identity for Spurs supporters who identify as "Yid" - as much as I'm interested in actual football. This is the case for several reasons. First, I'm new to soccer, so I don't feel confident enough in my judgements to make extended claims regarding tactics, players or games. Second, and perhaps most damning, I rarely actually watch Spurs games, in parts because illegal feeds make me nervous, but also because watching Spurs makes me nervous period. I can't sit still. I drift in and out of the room. My hands shake. It's not a healthy experience. Unless I know the score and the match is on a delayed feed somewhere, I've decided I can't watch. (Listening on BBC radio is only slightly less nauseating.) So my Spurs gameday experience is at its best, at its most enjoyable, when I get my game through the eyes of others. (I'll watch the highlights on MOTD later.) My preferred medium for following Spurs is through CFC GameThreads. I experience the game through the commentariat's reactions, the praise and blame, the shouting and singing, the cursing and the memes. (Oh, the memes...) The commentariat provides an enthralling, thoroughly enjoyable matchday, win or lose. And for this I am grateful.

Today's GameThread, however, was not our brightest collective moment, and encapsulated a few of the concerns that have been haunting about the periphery in the CFC community as the season - and likewise, as Spurs - have progressed.

I fretted some about how I wanted to shape this open letter, and after mulling a couple of options, I've decided to think about Walter Tull, who, when he stepped on the pitch in early September 1909 for Spurs in a 2-2 draw against Manchester United at the Lane, became the first black outfield player to compete in association football. (Tull was born in Kent to a Barbadian father & white English mother; both parents died before Tull was 10, leaving him and his brother Edward to be raised in an orphanage.) Decades before Jackie Robinson broke the color barrier in baseball with the Brooklyn Dodgers, Walter Tull did it with Spurs. He scored twice in ten games for the team, but was subsequently sent to the reserves. The reasons for the demotion are unclear, but it is generally thought that Spurs officials moved Tull to the second team to protect him from the racist taunts of opposing fans. Papers of the day singled out the abuse showered upon Tull during an away game to Bristol City as being particularly onerous. Tull was traded to Northampton Town in 1911 for a nominal fee and a defender named Charlie Brittan. Tull went on to play 110 times for Northampton Town. During World War I, Tull was commissioned as a second lieutenant, despite the institutionalized racism of the 1914 Manual of Military Law, which, as the July 2009 Hotspur notes, explicitly prohibited black officers from "exercising ‘actual command.'" Walter Tull broke another barrier, becoming "the first British-born black officer in the British Army" (32). He died on March 25, 1918, while leading his men in the second Battle of the Somme. Walter Tull was 29. His body was never recovered.

Sport is an awkward cultural phenomenon, equal parts progressive and conservative. The first black player in English football, goalkeeper Arthur Wharton, took the field in 1885, well in advance of most Civil Rights movements in the Western world. And yet, 125 years after the breaking of the color barrier, LGBT prejudices remain very much in place, and have yet to be addressed in any meaningful way. (The story of Justin Fashanu serves as tragic witness to the exorbitant price footballers pay if they choose to come out.)

I'm thinking about Walter Tull and Justin Fashanu today because I believe it would behoove us as a community of fans - and, I hope, as friends - to examine our comportment and our rhetoric, particularly as membership and participation in CFC continues (happily!) to grow. I would encourage us to take a long, meaningful look at the way we carry ourselves, what we say and what we don't, in a good-faith effort to answer these questions: Who is made welcome here? Who is included? And who, whether intentionally or unintentionally, might feel second-class, undervalued, or even fully excluded from the conversation, and thereby from the community?

I look forward to the GameThreads. (Really, I look forward to all the comments on pieces here on CFC.) I'm off work again tomorrow, and I'll be right here, laptop humming away, making stupid memes on roflbot in response to the Man City-Chelsea game on ESPN3. (There will be a live thread tomorrow afternoon, right?) And I'll be back again for the match next weekend. And I hope that anyone with a love for football and for this club, which, despite occasional hiccups, has a prouder, more progressive history than most, can feel welcome to come, read, comment, and revel in the glorious nonsense of Spurs fans watching a match together.