Tottenham Hotspur And The 4-6-0: Taking A Page Out Of Luciano Spalletti's Book

Share All sharing options for: Tottenham Hotspur And The 4-6-0: Taking A Page Out Of Luciano Spalletti's Book

Saturday was... abysmal. Facing West Ham in a crucial London derby, the Tottenham Hotspur strikers came up lacking, yet again. 13 combined shots between Jermain Defoe and Roman Pavlyuchenko, no goals.  The strikers have been ineffective the whole year, a fact much discussed on this site.

The top finisher on this team is not a striker but rather an attacking midfielder: Rafael van der Vaart. And with Tom Huddlestone returning from injury, the midfield has become unquestionably the deepest part of the team. So using some simple math,  if we have a bundle of fantastic midfielders and terrible strikers, why not get rid of the strikers? And therein lies the answer: the 4-6-0.

When Luciano Spalletti with Roma in 2007 was forced to introduce Francesco Totti as a striker, the Roma legend continued to act as a Trequartista, stationing himself still in the gap between midfield and defense. The formation left center backs confused whether to track Totti upfield or leave him unmarked.

Key to the 4-6-0 are the attacking midfielders, especially the wingers, taking diagonal runs through the spaces left by the out of position center backs. The formation worked excellently for large parts of the season for Roma, helping them to a Coppa Italia victory, but more than anything it has influenced the systems of teams like Manchester United and Barcelona, where the false-9 at striker was used to Champion's League winning success.

For Spurs, I'd imagine the team looking like this: 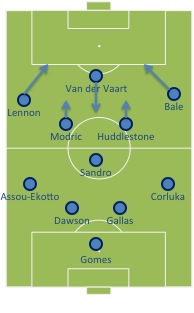 In the formation the back line stays the same. Sandro stays in the line-up as a central defensive midfielder, whist Luka Modric and Tom Huddlestone play more positive central midfield roles, attacking the goal. The wingers are inverted, with Bale and Lennon on switched sides. This should enable their pace to combine with their finishing as they cut in on goal with their favored feet. But the key is van der Vaart, drawing in the centerbacks, distributing, and finishing the chances given to him.

The best comparison for this system is the Roma system, unlike the systems of Manchester United and Barcelona that used actual forwards as false nines. It is interesting how van der Vaart compares to Totti in the role. Whilst Totti is a more natural goal scorer and a man who can create his own shot much better, VdV has the advantage in distribution. And considering the blinding pace of the cutting wingers, that might be exactly what Tottenham need.

The system would give Tottenham increased flexibility, putting a deep lying midfielder in Sandro who can tackle and start the counter-attack. The defense should be solidified and possession should increase, the question is will the scoring rise. In terms of pure numbers, perhaps not. The lack of poachers may slow down Spurs advantage to blow out lesser teams. But in terms of the ability to cause confusion and break open games, it may be better against the class teams Spurs are to face.

In the end, when faced with a serious striker problem, there are two choices: stay the course or try something inventive. With form lessening in the side and the top four falling slowly further out of sight, giving the 4-6-0 a shot might just be the thing to jump start this Spurs side to glory.