The challenge has worsened for Tottenham though as Rossoneri have hit top form. Milan beat a Napoli side that has pushed for the title in a 3-0 thrashing. The attacking three of Ibrahimovic, Pato, and Robinho seem to have finally clicked into the top potential Berlusconi imagined when he brought them together.

In favor for Spurs though are the players that will be missing from that dominant Milan side. Gennaro Gattuso is suspended after headbutting Spurs assistant Joe Jordan, Mark van Bommel, Urby Emmanuelson and Antonio Cassano are cup-tied. So how should Harry Redknapp attack this streaking Milan side?

The answer foremost comes in the circumstance. Holding a 1-0 lead in the tie with an away goal, one thing is obvious for Spurs: if Milan does not score, Tottenham's off the quarters. Now of course this is an obvious statement, but it is meaningful. Spurs have put themselves in the position to absorb Milan's pressure and counter-attack again.

With the multitude of injuries, it is clear that Spurs will be put to a test to hang with an aggressive Milan squad. After Milan's struggles in the first leg and need to score, I think it's a good guess you'll see a move to 4-3-3 with Thiago Silva returning to centerback. Milan is actually quite thin at the moment in the midfield with Pirlo and Ambrosini injured, but I would guess you would see Seedorf, Flamini, and Kevin Prince-Boateng starting rather than the youngsters like Rodney Strasser or Alexander Merkel. 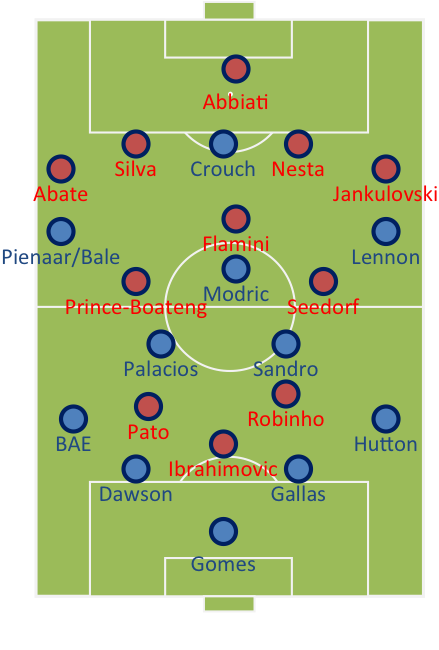 Now, Spurs already have the recipe for success against Milan: defend and counter. But instead of going 4-4-1-1 again, with van der Vaart very possibly absent, Modric comes back into the side. Organizing these players, a new opportunity arises. rather than having the wingers stay deeper and defend to make up for VdV's ahem, lack of defense, they can be pushed further forward so as to press Milan's weak fullbacks. With absolutely no other width on Milan's side, Tottenham have the opportunity to push play wide and control the wings. Modric can sink deeper into the midfield, controlling possession and spraying balls wide.

The key for Tottenham is to not lose possession in the midfield. In place of Milan's favored strong tackling trio of three (van Bommel/Gattuso/Flamini) likely only one or at max two players will be looking to create havoc in the middle of the pitch. So as long as Tottenham can defend not on the break, Sandro and Palacios should be able to balance both helping out the defense versus Milan's forwards and starting the counter in taking possession from Milan's more positive midfielders.

In the end, this tie isn't going to be pretty. Likely lacking the usual flash of Bale and van der Vaart, we're not going to have another "Taxi for Maicon" kind of game. But the game plan is necessary: absorb Milan's waves of attacks, and make them pay when they lose possession. With that, Tottenham should survive, and continue to create a legacy of European nights not seen since the glory of the early '60s.