This offseason, Bryan and I have come up with a variety of series to keep not only you guys, but ourselves entertained. The most ambitious of these series is the one I'm kicking off today, Tottenham Hotspur Fantasy Tactics. During this series, we will be looking at different tactical setups, both historical and current, realistic and unrealistic, and writing about how Tottenham Hotspur would play in them. In some cases, it's purely speculative. In other cases, we're going to go crazy, use Football Manager 2011 to create the tactics, and run a bunch of simulations. This is one of those cases.

Our first project was the W-M, a tactic developed by Arsenal manager Herbert Chapman in the 1920's. Obviously, the formation is very much outdated today. A team who plays with one central defender would simply get destroyed in modern football. However, I decided to start the simulation with the W-M in its purest form, then gradually adapt the tactic to become something that might work in modern football.

Before we get started, here's a diagram of the basic W-M setup. 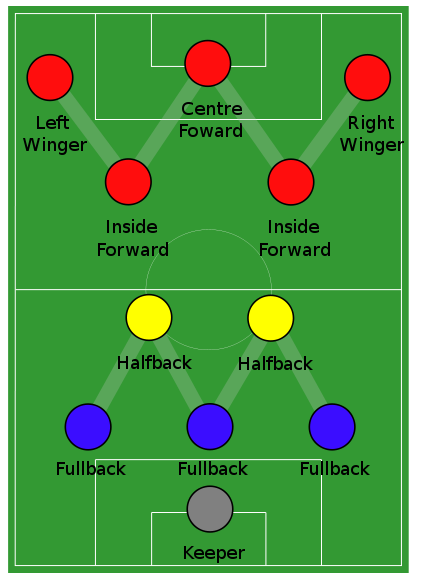 The simulation starts after the jump.

To start this simulation, the first team plays a friendly match against the reserves. I made reserves play W-M too, which made this easy. The teams played matching formations that they did not have any tactical knowledge of, but the first team had better players. They prevailed 3-0, and obviously, we learned nothing about the tactic. That's fine though, this was just a warm-up.

Wycombe came out in a very defensive 4-1-4-1. This game was an absolute lolfest. None of the three central midfielders got forward at all for Wycombe, so the tactical deficiencies of W-M were not exposed. The central defender and fullbacks marked the center forward and two wingers, while the two DMs prevented them from receiving dangerous through-balls. Wycombe are stupid. 4-0 Spurs.

Frankfurt played a narrow 4-2-3-1 in this game. There was absolutely no one exploiting the wide areas left open by W-M and all of the attacking midfielders held their position, doing very little pushing up to join the center forward or drifting wide. As a result. their tactics played into my hands. 2-1 Spurs, and we were better than the scoreboard suggests.

These guys played 4-4-2, and I thought we had a problem. With only one central defender in our back line, a 4-4-2 should be able to rip us apart. I thought wrong, and our boys put in a dominating performance. Michael Dawson, Sebastien Bassong, Younes Kaboul, Tom Huddlestone and Sandro won EVERY 50-50 ball. Tactically the matchup looked bad, but the players dominated. Levski were just crap in this one. We won 2-0.

Here is where this simulation starts to get very interesting. Milan start the match with a 4-3-1-2. Their lack of width is a blessing, but the Pato-Pippo combo up top could destroy us. In the 11th minute, the tactical deficiency shows up. Filippo Inzaghi gets through unmarked, but somehow misses an absolute sitter. After 26 minutes, we were unlocked again. Antonio Cassano and Pippo created a two-on one opportunity, but Cassano makes the wrong choice and shoots. On 45 minutes, inexplicably, Spurs score at it's 1-0! The lack of width in Italian football strikes again! Gareth Bale beats Massimo Oddo, then crosses to the far post. Aaron Lennon was completely unmarked as he cut to the far post, and he finished well.

In the second half, we go up 2-0 early thanks to a  Ledley King header on corner kick. In the 72nd minute, Jermaine Jenas predictably gave away a penalty kick, which was converted. We won 2-1, but looked terrible in the process.

Yes, the W-M is undefeated to this point, including a win against A.C. Milan, but that win was VERY lucky. They had all of the chances and all of the possession, but totally failed to capitalize. The finishing and decision making of the strikers was hilarious, and they could have easily scored four or five goals. This setup needs a change.

The most obvious deficiency in W-M as it pertains to modern football is the presence of only one central defender. As a result, I decided to move a defensive midfielder to central defense and make his settings extremely aggressive. This player will now push into midfield when Spurs have the ball, but become a central defender without the ball. Sorry Sandro, you go back to the bench as a result. I set William Gallas to ball playing defender - stopper in the game. His mentality is set to a more attacking setting than Huddlestone's. His closing down settings are the same as Huddlestone, but much higher than Dawson.

Parma start the game in a traditional 4-3-3. We open the scoring, taking a 1-0 lead in the 45th minute on a stunner from Luka Modric, and the goal was much deserved. We've been the better team. However, the way Gallas is playing is MUCH closer to Dawson than Huddlestone. It's effective, but not what we are going for. This is a solid tactic, but it is not W-M. At halftime, I cranked the CB's closing down and attacking to full blast to see what would happen. In the 81st minute, John Bostock hits an absolute stunner to seal it. Parma's defense has erased whoever we play at center forward, but the attacking midfielders are killing with their two-on-one advantage against Parma's defensive midfielder. We would make it 3-0, with King scoring again off a corner kick. In the second half, Charlie played in the Gallas spot with the new settings. He pushed forward quite a bit, but not enough. He still stayed closer to the main central defender than the defensive midfielder

The Basque club starts with 4-4-2 with two defensive midfielders. Could this be serious trouble? We go up 1-0 in the 15th minute, with Gallas scoring on a counter. He really went after that - are the mentality settings helping his aggression on corner kicks? Maybe, but I can't get him to play high enough for my liking, though. He just won't play up with Hudd, no matter the settings. At halftime, that player becomes an anchor man who man marks the striker, and we go back to the traditional W-M formation with different settings. Real Sociedad equalize in the 65th minute as King, in as the lone defender, loses his man. There were too many men in the box to handle, so this was half King's fault and half the fault of the tactics. They took the lead in the 74th minute, with King torched again. He was completely out of position, atrocious. Unsurprisingly, we get outplayed by quality opposition playing 4-4-2.

Predictably,  Arsenal play 4-2-3-1. Not predictably, they play Andrei Arshavin in the hole. Cesc Fabregas is injured. In the 23rd minute, Arsenal take a 1-0 lead through Maurane Chamakh. He scores cutting in from his right attacking midfield position, and he isn't picked up at all. Tactical deficiency exposed. Arsenal's fullbacks destroy us in the first half, while we are showing no creativity. I make halftime adjustments made to counter these problems without completely changing formation. The wingers are dropped deeper, the fullbacks get forward some, Modric's settings get changed to advanced playmaker and Roman Pavyluchenko's get changed to complete forward. The basic concepts are the same, just adjusted to play Arsenal. In the 56th minute, Pav equalzes. The first 10 minutes of the half were shaky, but we needed to push forward to get the goal. I'm not going conservative now, but the offside trap that I employed to start the half is now off. We eventually hold on for a 1-1 draw. The defensive midfielders were stellar in breaking up Arsenal passes and helping us keep the ball. Arsenal created few chances, but the goal came off the inherent tactical deficiency.

Having one central defender is going to get exposed over and over again. There is no masking this. In modern football, this setup cannot work consistently. So, let's completely modernize W-M, taking its concepts and turning it into something that might not get embarrassed today.

Our fullbacks are moved to right and left central defense, but they have a much more attacking mentality than the central defender. These players must have good ball skills, and they are given some freedom. Like most three-man back lines, they are central defender/fullback hybrids. As a result of this adjustment, the wide players have to come back a bit. Pav becomes a complete forward instead of poacher, while Luka and Rafael van der Vaart have their settings changed to play like real live Luka and VDV.

Auxerre are our opponents for the Champions League playoff round, and they go 4-4-2. This is a terrible matchup for real W-M, but a solid matchup for this incarnation. We should be able to control the midfield. It's at White Hart Lane, and I tell the team I expect a win.

VDV misses a sitter three minutes into the game. That setback aside, our passing is spectacular. Pav scores a goal to put us up 1-0 after 11 minutes, created by a great steal and through ball by Bale. We go up 2-0 minutes later thanks to a penalty kick drawn on a counter-attack, converted by Modric. We dominated the first half, but they were much better in the second when they realized they needed to focus their play down our right flank.

And that's why this doesn't work.

Bale is perfect for what this position demands on the left: A superstar, do everything wide player. Lennon is small and cannot tackle. To make this work the way it should, a complete wide player/wing back needs to be on the right. Spurs do not have that. Spurs would be poor in all kinds of three or five defender setups without buying an elite right wing back. Alan Hutton sucks. Kyle Walker could possibly be converted to this. Steven Pienaar is a major stretch. For the final game of this test, our formation becomes a 3-6-1 with Bale and Hutton as wing backs.

Liverpool play 4-3-3. They have purchased Charles N'Zogbia, and play him and Dirk Kuyt on either side of Andy Carroll. Against 3-6-1, this is a recipe for disaster. Were this not a simulation where I try to screw with W-M and make it into something that can be used in modern football, I would probably play different tactics. This is not a good matchup. And I was correct, as our boys play a terrible first half. We don't get scored on, but it's a miracle it is 0-0 at the break. Liverpool were dominant. They score in the 69th minute on a corner, and that's game.

Moral of the story

One man defenses do not work in modern football. Three man defenses do not work against one or three striker formations. As a result, the W-M or any modification that stays true to the original principles doesn't work well in modern football, ESPECIALLY not in places where 4-3-3 and 4-2-3-1 are the norm. Some kind of W-M modification with three central defenders can work well against many two striker formations, but this is a rarely seen thing.

Spurs wouldn't be the least bit effective in W-M, obviously, nor would they be good in any three/five defender setup. Still, this was a blast to research, play out, and write.