Last week Kevin kicked off this awesome new series with a look at the W-M formation. This week we'll be look at another historic formation and one that is equally impractical, but still was quite a bit of fun to test out. I, like Kevin, used Football Manager 2011 to create the tactics and run the simulations on Tottenham Hotspur's new tactics.

This week's formation is the Swiss Bolt or "Verrou". It was developed by Austrian manager Karl Rappan and he used it primarily while managing Switzerland's national team in the 1930's and 1940's. Rappan did not have the type of players available to him that England, Brazil, and some of the other football powers had so he sought a way for his largely amateur squads to best the more talented squads.

His solution, and general counter to the popular W-M and 2-3-5 formations of the time was the "Verrou" which is really a 1-3-3-3 formation. The book Inverting the Pyramid by Jonathan Wilson, which is basically a tactics bible, describes the formation like this:

Rather than the center-half dropping in between the two fullbacks as in the W-M, the two wing-halves fell back in to flank them. They retained their attacking role, but their primary function was to combat the opposition wingers.

This approach provided Rappan with a four-man defense that was much more able to cope with the attacking pressure from 4 and 5 attacker tactics used by managers at the time. Eventually, the two central defenders would split, one would drop deeper playing behind his three counterparts as a libero.

As far as style of play:

Rappan's team tended to drop deep, cede the midfield to their opponents and, by tight marketing, present a solid front to frustrate them so they ended up passing the ball fruitlessly sideways.

So, we're looking at a very counter-attacking style with tight marking all over the pitch. Fortunately, Spurs are set up quite well to counterattack so this shouldn't be too much of a problem.

Here's what a typical Swiss Bolt formation would look like: 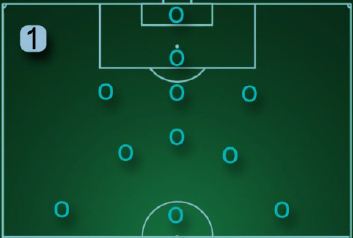 The simulation begins after the jump.

Initially I wasn't sure how to set up this formation. Inverting the Pyramid refers to two of the three midfielders as "Inside Forwards" which makes them essentially attacking midfielders. I want to stay true to the description of the tactic, so the formation I start of with looks much more like a 1-3-1-2-3.

Once I had the formation sorted out I then ran into the problem of which players would fill which roles. The team lacked a player that was really a natural sweeper, but I decided Ledley King or William Gallas would be a good fit in the role. Thankfully, the team has a surplus of central defenders so a formation that essentially plays with four of them wasn't going to be a problem.

My tactics first test would come against our Spurs reserves. After being down 2-1 at the half, thanks to two goals from John Bostock, I made some adjustments to the tactic and we ended up winning 5-2. The problem with this formation is that it puts a lot of onus on the lone central midfielder, for the first half this was Tom Huddlestone. Huddlestone lacks the mobility to press all over the pitch and when he was replaced in the second half with Wilson Palacios things went much better.

One thing I liked about the attack is that it works very much like a modern 4-3-3 attack. Roman Pavlyuchenko, playing as the central striker, dropped a bit deeper to receive passes from the midfield and on several occasions managed to pick out passes to either the cutting wings or the attacking midfielders.

Our next match was against Dinamo Bucarest. the opposition was playing a narrow 4-2-3-1, which worked out fine for us because our formation was also very narrow. The little tweaks I had made in the first game worked to great effect and we simply had a more talented squad. We came out winners 4-0.

One new concern was raised in this game however. Bucarest's two MC's were able to essentially mark Rafael Van der Vaart and Luka Modric, my two inside forwards, out of the game. The two of them barely touched the ball and they weren't contributing anything to the team's defensive efforts. Next, we faced our biggest test of the season: FC Porto. Andre Villas-Boas side lined up in the expected 4-3-3 formation, albeit without Hulk and Radamel Falcoa. In anticipation of being attacked mercilessly I moved Modric and VDV back into the midfield as advance playmakers and put in Sandro as a defensive midfielder. We got absolutely dominated in this match, but  somehow pulled out a 2-0 win. Porto's wingers met absolutely no opposition on the flanks and consistently cut inside and launched shots from the corners of the penalty area. Gomes made some superb saves to keep us close. The four defenders clustered in the middle of the pitch are at a huge disadvantage against a side that plays down the flanks. It's fairly easy to deal with crosses from out wide, but if the wide men are going to cut in and shoot then the defenders need to be actively closing people down.

I spent the rest of the pre-seaon tweaking, then un-tweaking, then re-tweaking the formation. We went undefeated through the preseason which was good and I felt confident going into our season opener that the squad could handle this formation. I'd finally settled on King as my sweeper with Michael Dawson, Younes Kaboul, and Gallas in front of him. Sandro was my defensive midfielder sitting behind Modric and Van der Vaart playing as advanced playmakers in the center of the park. Meanwhile, up top Pav was my center forward with Gareth Bale and Aaron Lennon providing pace on the flanks.

Our league campaign opened against Stoke City. Stoke played a 4-4-2 formation which allowed Spurs to run away with the game, a 4-1 victory. Their lone goal came on a screamer from 30 yards out. Unfortunately for us, Stoke had a lot of shots, 15 shots total, 8 on goal. Better teams, like Arsenal and Manchester United, would have punished us even with Gomes playing as well as he did.

In mid-week we traveled to France to face AJ Auxerre in our Champions League qualifying match. Auxerre played a 4-4-2 and were defeated, handily. No team has really put up much of a fight against us since the Porto match, but I'm not so naive as to think that it's because this formation is awesome.

It takes a while, on back-to-back weekends we're beaten handily by the two Manchester sides. Manchester City starts off by walloping us 4-1 and then United pile on with a 5-0 nil thumping at White Hart Lane. Both sides were able to exploit the flanks and their wingers scored some wonderful goals. City got a brace from David Silva and Nani scored a first half hat trick for United.

This tactic was able to beat most of the lesser Premier League sides, but let's be honest, with the team we have every tactic should be able to do that. The true test of a tactic for this Tottenham side is whether or not it can get us over the hump against the top sides in the league.

The Swiss Bolt is a predecessor to the Catenaccio style of football that would become popular in Italy in the 1960's (Spoiler Alert: It's also the next tactic in our Fantasy Tactics series). The more modern approach to this tactic is essentially the Jose Mourinho plays. His teams press all over the pitch and are happy to cede possession to the other side. Mourinho's teams play with two attacking midfielders behind what are, essentially, 3 forwards. The difference is that in the Swiss Bolt the wingers operate as pure forwards, staying high up the pitch at all times.

This narrow defense is just not effective, especially without wide midfielders to track back and neutralize opposing wingers. Traditional narrow defenses, like the three man defense at times employed by Kenny Daglish at Liverpool, use either wing-backs or wide midfielders in more defensive roles to make them less vulnerable on the flanks. Additionally, the sweeper or libero role is virtually unheard of in modern football and makes it usage in this formation completely and totally maddening.

This tactic is considerably less viable now than it was at the time it was created.