What Adebayor Means for Tottenham

Share All sharing options for: What Adebayor Means for Tottenham

It's official: Emmanuel Adebayor is coming to Tottenham Hotspur on a one year loan move from Manchester City.

The fanbase has already spoken out on this in two polarized ends. The haters say that he's former Scum, a black hole at forward and a clubhouse cancer. The advocates say that he's of a higher class and quite frankly, he is someone new from our current underwhelming crop of strikers.

But rather than looking at the emotional impact on the club which will sure to be the stuff of message boards, let's figure out the impact on the field. We have the data, we have the numbers, and we have the tactics. What does Adebayor mean for Tottenham this season?

Well, to understand Adebayor's impact, we first need to understand what he'd be replacing for Tottenham. First up we have Roman Pavluychenko. After his big start against Hearts today resulted him in knocking every shot into Row Z, I think we can fairly eliminate him as a contender for playing time at the moment for Tottenham.

Next we have Jermain Defoe. Defoe was electric in the first Hearts tie, skinning the SPL squad's defense. But against Manchester United this weekend, Defoe was an entirely different proposition. Rather than playing a true advanced forward to lead the line against United, Defoe drifted deep and wide, leaving a giant hole up top for Tottenham.

Now if you're Barcelona this is no big deal, Leo Messi does this constantly. However, Not only can Tottenham not link play like Barcelona, but Defoe's distribution was also negative and inconsistent, making this an even bigger problem. Check the chart:

Now of even greater importance than this is the presumed strike partner for whoever our No. 9 is, Rafael van der Vaart. Defoe's drifting is absolutely unviable in combination with van der Vaart, whose central positioning left him attacking three defenders alone in the United match whilst Defoe was nowhere to be found.

Defoe has never shown ability to play well without a tall No. 9 next to him in a 4-4-2. And van der Vaart has proven to be a more reliable performer as a strike partner; a more consistent finisher, distributor, and defensive worker.

Now ask any Spurs supporter who paired best with van der Vaart in 2010-11, and you should universally hear Peter Crouch. Crouch's distribution is top notch, where his deft touch pairs fantastically with his height. He can win balls and quickly put them into great positions. At his best, Crouch is a perfect striker for Tottenham's system.

Unfortunately, last season Crouch was far from his best. Throughout his career, Crouch has averaged shots/goals ratio of 0.13 and a shots on target ratio of 0.54, hardly exemplary but at least serviceable. But last season Crouch was shocking at goal, as his shots/goals ratio fell to 0.09 and his shots on target ratio also dropped to 0.51. Crouch's efficiency has become poor, and that's the biggest reason Adebayor is needed.

However, this does nothing to level the idea that Adebayor is a me-first player that is unable to bring in his teammates. Well, I have long found this to be false. Perhaps my memory is most affected by a Tottenham-Arsenal derby of September 2007, where Adebayor tore Tottenham apart with two goals as the Gunners won 3-1. I remember Adebayor's dynamism in front of goal that day, but I also remember how active and involved he was that game as well. Let's look at his passing chart from that game: 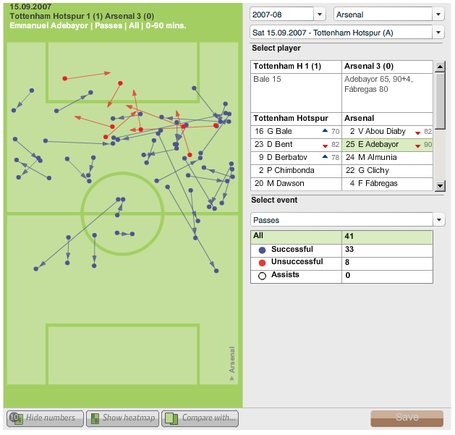 This chalkboard shows Adebayor's fantastic all-around game. A high passing percentage, positive movement, active while still maintaining positioning in the final third, and of course, scoring goals. This is the kind of forward Tottenham needs, an active No. 9 who can win balls, pass, and finish. This is what Adebayor can do.

Obviously, it will take time for Adebayor to blend in with the squad and become a player who can function within the system. But Adebayor's skills and size make him extremely viable as a striker that can help lift Tottenham. Give him time to adjust and hope that he keeps his head together, but Emmanuel Adebayor could be just what Tottenham has been missing in attack.