The Spurs XI: Surviving Without Rafa

Share All sharing options for: The Spurs XI: Surviving Without Rafa

Tottenham Hotspur received some devastating news when Rafael van der Vaart's injury would keep him out six weeks this season. With this injury keeping the Dutchman out until at least mid-October, Harry Redknapp will scramble to rebuild his tactics without the attacking talisman.

Will Redknapp dramatically change his side to accompany his new players, or will he hold the fort with the players who have achieved a top-4 finish and hit unreached heights in Europe? Take a look at Tottenham's three best line-ups (from least effective to most) after the jump: 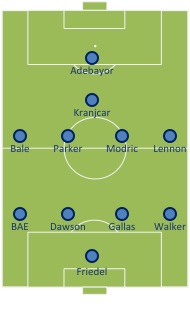 This line-up is all about consistency for Tottenham. Since Rafael van der Vaart arrived a year ago, the 4-4-1-1 has become Tottenham's preferred formation, and the one used in both league matches this season.

The changes are fairly simple for the side--Niko Kranjcar becomes the new attacking midfielder, playing a position that he has thrived at with the Croatian National Team. Parker becomes Luka Modric's new partner in the midfield, providing more defensive stability to a Spurs side that has been hemorrhaging goals this season. Adebayor becomes the new first choice striker, as he will likely be in all formations.

The line-up should hold possession well in the center of the pitch, but it may be a challenge for Kranjcar to be the same threat in the final third that VDV has been. 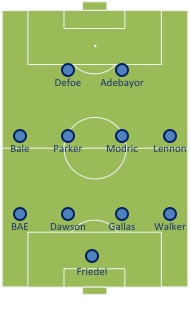 In 2009-10, Tottenham reached the top-4 by playing primarily 4-4-2. And with Tottenham lacking the unique tactical challenge of Rafael van der Vaart, now just might be the time to return to the old English standby.

Much of the line-up remains the same, as the midfield quartet still features the blazing wing play of Bale and Lennon with Parker and Modric controlling the center of the pitch. But with Defoe in at starter, Spurs get a player who can capitalize on Adebayor's pressure and threaten the defense with his pace and shooting.

This line-up easily could be the XI for must-win matches, but its flaw is obvious. It leaves Tottenham dangerously thin in defense. Spurs would anticipate to often be outnumbered in midfield, and neither Defoe or Adebayor is noted for their defensive work rates.

Still, this could be the line-up Tottenham turns to to pressure weaker competition with a dynamic forward duo of Defoe and Adebayor. 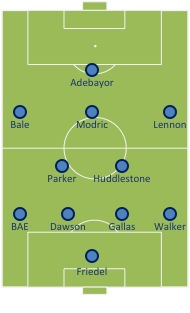 Due to various issues of formation, need, and injury, it's easy to forget that Luka Modric was brought to Tottenham to be a classic number 10. But these circumstances have pushed Modric both deeper or wider on the pitch in the midfield. Van der Vaart's injury, however, provides the Croatian an opportunity to be a very different kind of player beneath the striker than Rafa.

Pushing Luka forward should help both the wingers and perhaps most importantly, Adebayor. Luka possesses the ability to receive the ball in advanced positions and make the proper decisions to play balls off to his fellow attackers or create his own chance. With Adebayor possessing a history of being an unhappy camper without consistent service, this should be an asset in getting the best out of the Togo man.

Perhaps most importantly though, by pairing Parker and Huddlestone deep in the midfield, Tottenham adds some needed defensive stability. The two are different players, Parker a classic defensive midfielder with class tackling and vision, Huddlestone a box-to-box man who can create havoc up the pitch. With both able to pass and defend, Tottenham can clog the midfield whilst giving the wingers more freedom to attack.

But what do you think? Is one of these line-ups the one or do you have your own idea? Sound off in the comments below: