Playing left wing stops Gylfi Sigurdsson from getting left behind

Gylfi Sigurdsson hasn't played his best football for Tottenham yet in a central role, but he might have carved out a niche for himself with his performance on the left against Chelsea.

Share All sharing options for: Playing left wing stops Gylfi Sigurdsson from getting left behind

One of the widely-agreed positives that sprang from the disappointing 2-4 defeat suffered by Tottenham Hotspur at the hands of Chelsea on Saturday is that Gylfi Sigurdsson looked a look livelier and more effective that he has on previous outings for the side. Throughout the game, the Icelandic international's work rate was consistently impressive, and only bad luck on one occasion and a good save from Petr Cech on another prevented him from bagging a deserved first goal in a Spurs shirt. The question is: what was the key factor that prevented Sigurdsson from suffering through another 90 minutes of anonymity in the hole behind the striker?

One possible answer is that Sigurdsson didn't actually play in the hole against Chelsea. Well, not for any considerable length of time during the game at any rate. As the heat maps and action areas below show, with Clint Dempsey toiling away at CAM, Sigurdsson stuck more to the left side of the pitch, spraying crosses from wide and cutting in on goal with the instincts of a left forward. Though there was a little interchange with Dempsey at times during the game, for all intents and purposes, Siggy largely served as the side's replacement for the absent Gareth Bale until the introduction of Emmanuel Adebayor late on in the game shifted him inside. 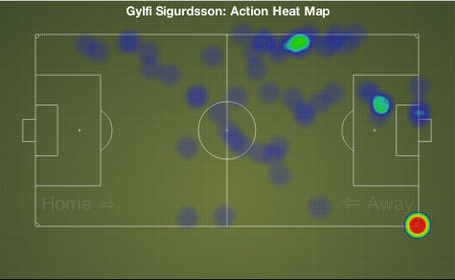 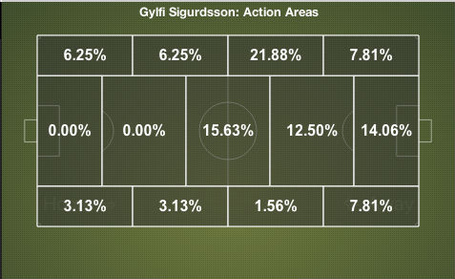 Exactly how effective Sigurdsson actually was playing in a wide role is tougher to actually assess than the instincts that lead one to congratulate him for his performance would suggest. His pass completion stats actually finished up lower than in two previous games against Reading away and QPR at home, performances for which Siggy received no plaudits from onlookers. This point is partially explained, however, by the fact that the young midfielder was attempting more ambitious passes against Chelsea than in said games. Much of Sigurdsson's anonymity in previous games can be explained by fact that most of his layoffs to his teammates were short and rarely sparked any attacking movement of consequence, with Siggy notching up only one key pass apiece against both Reading and QPR. Against Chelsea, Siggy sprayed longer balls across the pitch to his teammates, managing his first 3 successful crosses of the season and 3 key passes to boot. Siggy's stats aren't impressive on paper, but the effort and expansiveness on display was certainly heartening, and playing wide left Siggy certainly made more of an impact on the game than at previous points during the season.

It also doesn't need to be pressed home how much more dangerous a goal threat Sigurdsson looked cutting in from wide left to bear down on the opposition area, as the results were clear for all to see. Siggy is proficient with both feet and is thus well-paced to fool his opponents with clever body feints and unleash powerful strikes to beat the keeper. We caught a glimpse of his cut-in ability during the preseason match against the New York Red Bulls, and Siggy was able to bottle a little more of that magic against Chelsea, sadly with no consequence to the final score.

Does all of this analysis suggest clearly that Sigurdsson might have found a new niche for himself on the left wing going forwards for Spurs? Not really. A lot of it could be explained with Sigurdsson just upping his work rate to impress in one of his growingly threatened starting opportunities. One could also argue that we haven't seen Siggy playing centrally behind Emmanuel Adebayor yet, and thus have a grossly distorted impression, or lowered expectations, of what constitutes a good performance from him. Other problems abound: Siggy really doesn't look like a player capable of performing take-ons with the confidence of Aaron Lennon and Gareth Bale, and cannot even get close to matching their pace, attributes of both that make them an attractive symmetrical pair in this Spurs side.

What I will say, however, is that I was cautiously impressed with how well Siggy coped in a position I wouldn't have considered placing him in before Saturday. He was disciplined, dangerous, and at least attempted a good degree of positive expansive play. Since we know Siggy can't really play in a pivot already, it's also not unfair to say that he showed some signs of being able to channel his technical skills into a role as a wide playmaker, and someone who's very fond of creative forces out wide (hello Mr. Juan Mata), I was pleased to see that we at least have an emergency playmaking option should Gareth Bale ever decide to procreate again in the near future.