The staff of Cartilage Free Captain love hypothetical scenarios. This is the ultimate one. If you and your friends could pick a team made up of entirely British football players and play matches against each other, who would you pick?

Share All sharing options for: The British Footballers Fantasy League

A couple of weeks ago one of the members of the commentariat, Jellyfeast, asked us a question in our weekly mailbag post for Wheeler Dealer Radio about picking a team of British footballers to play a football match. This question, as often happens, was interpreted two different ways by our site's editors. One thought that the question applied to current footballers; the other believed we were talking about all British players ever. On the podcast the question was answered using the former criteria, but that still left he latter question open.

What would happen if we picked a team of all the best British footballers throughout history and played them against each other? As a result, our fearless leader, Kevin McCauley, proposed we do just that. As a large group of football nerds this suggestion obviously excited everyone here. The idea of getting to pick a team with George Best, Kevin Keegan, and Rio Ferdinand was pretty exciting to all of us and with that in mind we did tons of research and put countless hours into selecting the very best teams of British footballers.

There would be only a few simple rules. The first, and obviously most important, is that all the players had to be British. That doesn't necessarily mean they have to be born in the UK, but that they were capped or at least could have been capped by a national team in the UK. The next rule is that each squad would have to include at least one player from each country within the UK. That means at least one Scottish player, one Welshman, one player from Northern Ireland, and one English player. The players we would be selecting would be the version of the players in their prime. Thus, we would be drafting Ballon d'Or winner Michael Owen, not the current version of Owen that plies his trade at Stoke City. Finally, we would be picking a squad of 18 players and the squad had to include two goalkeepers.

Operating under that basic framework the six of us—myself, Kevin, Brian, Ryan, Ed, and Lennon's Eyebrow—set out to create the best possible teams we could come up with. We generated a random order in which we would select our respective teams. We decided on a serpentine draft. Meaning that the team that picked last in the first round would pick first in the second round and so on and so forth.

Because the footballing gods hate things that are good, Brian Mechanick got the first pick. Keep in mind that where a player got selected in the draft may not necessarily reflect how good he is. Lots of us were drafting for a team to play a specific way. So don't yell too much about how there's no way Alan Shearer is better than Ian Rush or Denis Law, because that's not what we're trying to say. Without further ado, here's how the first few rounds of the draft shook out. 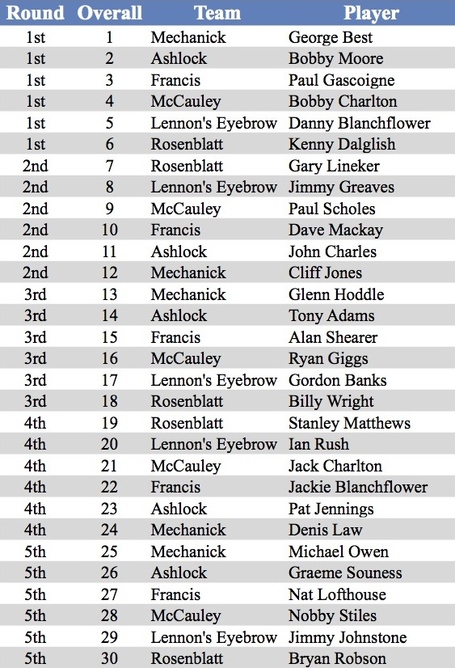 Unfortunately, Brian Mechanick did not screw up the first pick. The biggest surprise of the first round was Ed's decision to take Paul Gascoigne over Bobby Charlton. Kevin McCauley made Paul Scholes the first player from the modern era selected. This was Kevin's second Manchester United player, which would become a worrying trend throughout the draft. Lennon's Eyebrow became the first person to select a goalkeeper, taking Gordon Banks in the third round. Ballon d'Or winner Michael Owen was chosen by Mechanick in the fifth round.

Over the next couple of days each manager will introduce you to his respective teams. We'll each talk a little bit about the tactics that our teams will play and give you all a brief overview of what role we see each of the players we selected fulfilling for our teams. At the end of the week you'll get the opportunity to vote on who you think has the best team. After that, the real fun begins.

Next week the squads will be placed into two groups of three and they will play "matches" against each other. We'll provide you with minute-by-minute reports of the "matches". The following week we'll move on to knock out rounds where eventually one of us will be the winner.

So, what do you think so far? Who has the best team after the first five rounds? Any surprises? Are you as excited for this tournament as we are?