The first of six attempts to construct the greatest British side of time, pick-up football style. 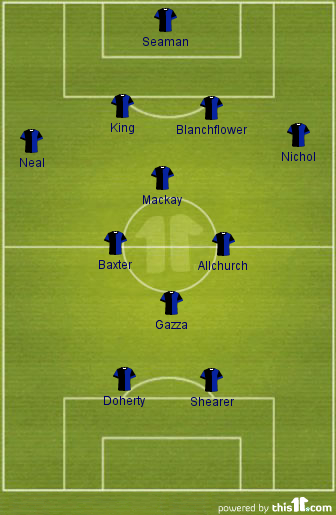 Lining up in a modified version of the diamond 4-4-2 that won England its first and only World Cup, this British all-star squad is the perfect balance of raw physicality, technical wizardry and unparalleled footballing intellect. Guts and genius abound in equal measures, and when it comes to goal scoring potential across the whole side, this team cannot be matched.

Let's begin with the men who would be responsible for doing that elusive thing that Kevin Keegan identified as the key to winning at football: putting the ball in the net. Pairing the greatest ever English forward and one of history's most talented target men, Alan Shearer, with Peter Doherty, the Northern Irish "genius among geniuses" famed for his inexplicably brilliant dribbling skills, the side is graced with a perfectly balanced striking partnership which can unlock defenses of any kind. Between them, the two men provide the versatility of a game plan which features mixed service to the forwards. Shearer and Doherty were both highly rounded and adaptable footballers, and together they form a comprehensive attacking threat.

Behind these monumental talents sits a midfield which provides the magic trifecta of flair, grit and mobility, comprised of Dave Mackay, Jim Baxter and Ivor Allchurch. The first of these men will be recognised to some as one of the most important Tottenham players of all-time, a player George Best described as "the hardest man I have ever played against- and certainly the bravest", and would surely be trembling at the prospect of having to face him again in this fantasy matchup. Mackay forms a shield in front of the defense which only the foolhardiest of opponents would seek to take on directly, and in this team would be tasked with killing attacks before they start and driving the team back the other way to begin counters.

Slim Jim Baxter, known for his cheeky style of play and renowned for tormenting opponents with his tactical knowledge and vision, is the side's playmaker. With his knack for picking out picture-perfect passes and his famous trickiness, Baxter would ensure that possession remains with my side for all of the stretches of the game that count. The last and most interesting of my starting midfield three is Allchurch, who played for most of his career as an inside forward, yet has been repurposed in my side as a centre mid. In many ways, Allchurch possessed all of the attributes of the prototypical 'runner'. His famed ability to beat his man, combined with his nimble movement and passing abilities, would mean he could serve as a source of unparalleled positive attacking movement for the side through the middle.

As if winning the ball from Baxter and Allchurch and getting it past Mackay wasn't a seemingly impossible enough set of tasks on their own, any opposition who somehow burst through to my goal area would have to contend with the most technically gifted English centre back of his generation, the Goliath among men that is Ledley King. We all know the reasons why King is a living legend among Spurs fans, and in an alternate reality where his knee injury isn't an immediate consideration, no striker could ever easily overcome the unnaturally intelligent, positionally perfect and ferociously strong former Tottenham captain. When paired with Jackie Blanchflower, the technically skilled Manchester United Busby Babe who was shifted from his original position of forward to centre half, the scoring potential of my defence from set pieces becomes ungodly, and you can be sure that the side would never struggle to play the ball out of defense to retain dominance over the match.

King and Blanchflower are flanked in my team by two of the most pivotal members of Liverpool's most successful ever side, Phil Neal and Steve Nichol. In a narrow 4-4-2, the ability of the fullbacks is key, and very few men who have ever occupied the respective positions of Neal and Nichol have excelled so much at going forward to attack and tracking back to kill attacks dead. Between the sticks is David Seaman, one of England's most consistent performers for well over a decade. Playing into his 40s, Seaman demonstrated a blend of physical toughness, bravery and reflexes that his successors up to Joe Hart failed to live up to- it's no wonder he's the man most look straight towards when trying to pick the best save in Premier League history.

You may have noticed by this point that I've left a certain character out in working my way through the team front to back. This is by no means an oversight, but instead a means of getting perhaps the shining light of my team the due attention he deserves. Sitting at the tip of my midfield diamond is Paul Gascoigne, the most all-round gifted English midfielder of all time. Injury problems and a long history of alcoholism have tragically served to mask the fact that at his peak, Gazza could do literally anything you could conceive of with a football. Tenacious, nimble, raw, refined, direct, artful- Gascoigne was everything an attacking midfielder could be all at once. In playing him as the No.10 in my side, I've liberated him to become an unstoppable force of nature, creating for the forwards and scoring for fun off his own back. With the wizardry of Gazza slotted in, the flair and intelligence of my side is simply irresistible.

In addition to the quality of my starting lineup, depth and dimension are housed in spades in the options I can draw upon off my team's bench (aside from Foster, who was a random and arbitrary pick). Shearer is ably understudied from the bench by Nat Lofthouse, the 'Lion of Vienna' whose strength and guts helped him to 30 goals in 33 games for the English side. Alf Ramsay, the thinking man's fullback, provides me with yet another source of creativity and tactical brilliance, while Archie Gemmill, scorer of perhaps Scotland's most iconic goal and the man Brian Clough personally camped at the house of in order to secure his signature, provides competition for Baxter in the playmaking role. Willie Miller, one of football's greatest ever stoppers, and the legendary Viv Anderson provide me with defensive cover, while Darren Fletcher, the man whose work rate and industry has been sorely missed by Alex Ferguson over the past year and a half, is my replacement runner.

Clearly, this would be a side that would play largely through the middle of the pitch, using the lightning rod of its central spine to press the opposition hard. Yet in Nichol and Neal, the side also possesses width, and their overlap play would be vital in providing deadly crosses for Shearer to nod home, while King and Blanchflower provide flexible and impenetrable cover for the ever-prepared David Seaman. Finding a captain was a difficult decision in a team full of potential leaders... LOL, jk, I of course picked Ledley King, whose softly thundering presence would drive the side on to glory, glory.

I really like this team, and I hope you do to.