The second of six attempts to construct the greatest British side of time, pick-up football style. 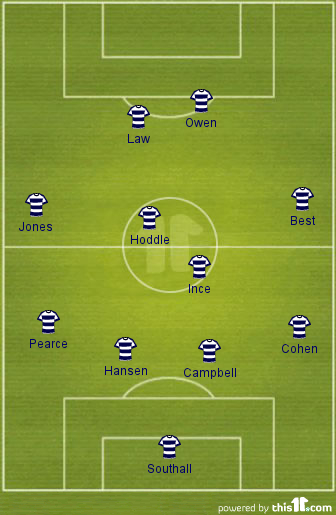 This is the All-British Side. The greatest of the six teams assembled in this endeavor. The idea was clear coming in once I found out I had the first overall pick. Utilize brilliant wing play to exploit the mediocre crop of British fullbacks I would be facing.

George Best was the clear first pick, as I chose to build my team around the exploits of the brilliant Northern Irish winger. Best, oft considered the greatest British player of all time, was a prolific member the league-winning Manchester United sides of the late-60's. A prolific goalscorer (highlights), Best also brought phenomenal on-ball skill, pace, and a top cross to the table.

On the other flank is Tottenham Hotspur legend Cliff Jones. Jones, one of the leaders of Spurs' double winning side of 1960-61. Jones was widely considered the best left winger in the world in his day, and helped lead Wales to their first and only World Cup berth as they reached the quarterfinals. Incredibly pacey with a strong cross, it can easily be said that Gareth Bale is following in Jones' shadow.

The strike force is led by another third of Best's Holy Trinity, Denis Law. Law is a Manchester United legend and was named Scotland's Most Outstanding Player of the Last 50 Years. A prolific all-around goalscorer, Law and Best combined to help make Manchester United one of the world's most outstanding sides in the '60's. Joining Law up top is a third Ballon D'Or winner, Michael Owen. Owen may be marginalized by his decline in his career after injury, but in his prime he was one of the greatest goal poachers of all time. He will do well being the "Fox in the Box" alongside Law.

The central midfield is a classic English combo, with the creative attacker and defensive minder. The more attacking player is Glenn Hoddle, Spurs legend and one of the most creative central midfielders Britain has ever produced. A true all-around attacker, Hoddle will maestro my squad's attack.

Hoddle's partner is Paul Ince, a starring box-to-box midfielder of the 90's. Ince's game was strong all-around, pace, stamina, uncompromising tackling, powerful shooting and good passing ability. Ince not only led the Manchester United teams of the early 90's, but also was one of England's best players in Euro 96, as he served the role of "Gazza's Minder".

However, a real strength of this team comes from the defense. It's led by Alan Hansen at centerback, one of the greatest defenders in British history. Hansen captained many of the prolific Liverpool sides of the 80's. Hansen's game was one of skill, using precise tackling, positioning, and distribution to become one of the era's greatest centerbacks. His partner is one of pure power, Sol Campbell. A legendary performer at Tottenham Hotspur and Arsenal, Campbell provides a set piece threat and aerial dominant figure on my defense.

My fullbacks are led by World Cup winner George Cohen. Cohen was a prolific right back whose attacking instincts and pace were far ahead of his time. A one-club player with Fulham, Cohen will provide the overlapping runs that cover Best's inside runs. On the left is the Psycho himself, Stuart Pearce. Pearce was a fantastic all around left-back, combining intimidating defense with frantic energy and skill in attack.

In goal is Neville Southall, an Everton hero and the last goalkeeper to win FWA Footballer of the Year. Well renowned as one of the greatest shot-stoppers in history, Southall's decisiveness will prove the ultimate stopping point for any attack.

My bench provides a bevy of late-game options. If I need a goal, then I only have the greatest goal scorer in English League History to come on, Dixie Dean. Dean's 60 league goals in 1927-28 still reign supreme in history, and will provide a true center forward to get me the decisive goal.

Chris Waddle is my cover on the wings, as the dynamic attacker can join with his former teammate Glenn Hoddle to bring some "Diamond Lights" onto the pitch. Frank Lampard provides an attacking option in the center of the pitch if necessary. And Paul Parker, the dynamic right back that helped lead England in World Cup '90 provides cover for fullback if we need some pace.

Holding a lead, legendary hard man Vinnie Jones is the option. Jones, a former Wimbledon legend and FA Cup winner, will put a reducer into any player that dares to dart down the center of the pitch, adding an intimidation factor that can only help launch my team. John Terry adds some more toughness to the defense, as the three-time UEFA Defender of the Year is capable of coming in at any point an locking down the defense. David James' fro is the backup keeper.

This team will play in a classic British manner. A strong defense will create turnovers, as the balls are spread to the flanks as Best and George launch counter-attacks. Law and Owen will not be stopped in the box, especially as Glenn Hoddle hits them pinpoint passes. And with Paul Ince providing the midfield engine and Southall dependable as ever in goal, this team will win the championship.