Before I get to my team, I'd like to take a minute to say that the two teams presented yesterday were well and truly awful. Mechanick's team in particular is reprehensible and if they make it out of the group stage I will be incredibly offended. So, without further ado, I present you with the best team that you've seen in this series so far.

Pat Jennings: My lone Northern Irish player also happens to be a Tottenham Hotspur legend. Jennings won 4 trophies at Spurs (1 FA Cup, 2 League Cups, and 1 UEFA Cup) and made 591 appearances in all competitions. He even scored a goal in a Charity Shield match against Manchester United. He was named FWA Player of the Year in 1973 and PFA Player of the Year in 1976. He's currently Tottenham's goalkeeping coach. Youtube / Wiki

Allan McGregor: This is my backup keeper. He will not play. The biggest point in his favor is that he is not Rob Green.

Tony Adams: Yes, Adams played for Arsenal. No, I don't care. There's a statue of this guy outside the Emirates (making him one of the club's loudest fans). Adams made 672 appearances for the other North London side and scored 48 goals. He won numerous club and personal accolades. In 2008 He was named the third greatest Arsenal player ever. Youtube / Wiki

Neil Franklin: A Stoke City Legend who's career was derailed by a suspension following WWII. Following WWI Neil Franklin was widely regarded as England's best central defender, but he left cold and windy Stoke-on-Trent for Colombia. When he returned to England after a year he was suspended and never played for Stoke again. Stanley Matthews once said about Franklin, "[He] won everything in the air, tackled with superb timing and when the ball was at his feet possessed the nous to pass it with all the guile and intelligence of the most cerebral of inside-forwards." Wiki

Tommy Gemmell: Celtic's right-footed leftback had quite the career. He was part of the famous "Lisbon Lions" side who won the European Cup in 1967. Gemmell even scored Celtic's equalizer in the final. Gemmell made 418 apearances for Celtic and scored 64 goals. Youtube / Wiki

Emlyn Hughes: The captain of the very successful Liverpool sides of the 70's Hughes played competently at leftback, central midfield, and center defense. He won four league titles, an FA Cup, one League Cup, two European Cups, and two UEFA Cups during his career. In 1977 he was named FWA Player of the Year. Youtube / Wiki

Bobby Moore: I'd have called Adams the greatest ever English defender if it weren't for Sir Bobby Moore. Pele called this Moore the greatest defender he ever played against, which maybe meant more back when Pele wasn't an idiot. The likes of Sir Alex Ferguson, Alf Ramesy, Franz Beckenbaur also regarded him as the best defender ever. Moore spent most of his career at West Ham United where he won only a solitary FA Cup. He was part of England's World Cup winning side in 1966. Celtic manager Jock Stein famously said, "There should be a law against him. He knows what's happening 20 minutes before everyone else." Youtube / Wiki

Gary Neville: Sure, he may not be that great of a football commentator, but the Englishman was one of the best right backs ever. Neville played in 602 total matches for Manchester United, winning the Premier League eight times, the FA Cup three times, the League Cup twice, and the Champions League once. He was named to the PFA's team of the year on 5 different occasions. Youtube / Wiki

Steven Gerrard: I took Gerrard with 50th pick in the draft. That he feel that far was, in my mind, criminal. My only trepidation is that he is often viewed as a man without a position. However, let's not forget that this is a player who was named UEFA's Player of the Year in 2005 and has scored more than 150 goals for Liverpool, despite playing with some of the worst collections of talent in Anfield history. Gerrard is an excellent pass and finisher, and his defensive abilities are nothing to sniff at either. Youtube / Wiki

Owen Hargreaves: I know this seems like an odd pick, but there truly is a dearth of true defensive midfielders in Britain. It's either Nobby Stiles or Hargreaves. During his prime (read: when not injured) Hargreaves was one of the best players for a Bayern Munich side that won four Bundesliga titles and a Champions League trophy. He won another Champions League with Manchester United. Hargreaves has tremendous work ethic and was a tough, but good tackler. Youtube / Wiki

Martin Peters: Peters was a member of England's 1966 World Cup winning squad. He played mainly for West Ham United, Tottenham Hotspur, and Norwich City during his career making 724 total appearances and scoring 175 goals. He was known as "the complete midfielder" because of his ability to pass with either foot, his aerial ability, and his movement. Peters was also a freekick specialist. Youtube / Wiki

Graeme Souness: The surly Scot made his name at Liverpool in the late 70's and early 80's. He played 673 career matches and scored 92 goals. Souness is often portrayed as a hard man, a ball-winning central midfielder, but that's not necessarily the case. Souness was also a wonderful passer of the ball and an excellent dribbler. He, perhaps more than anyone, exemplified the role of the box-to-box midfielder. Video / Wiki

Johnny Haynes: Mr. Fulham! Nicknamed "the Maestro" for his passing ability, Haynes played inside-forward for Fulham from 1952-1970 scoring 147 goals. Haynes became the first player ever to earn £100 per week (thereby leading to the downfall of football as we know it). Pele, who apparently has something to say about everyone, called Haynes "the best passer of the ball I've ever seen." He has a statue outside of Craven Cottage (along with Michael Jackson). Youtube / Wiki

Billy Meredith: The Welsh winger is my only pre-WWI player. He was considered one of football's earliest superstars for his performances with Manchester United. His main position was right wing and thus he serves as an excellent backup to Haynes. Meredith played for both Manchester United and Manchester City during his career, scoring 176 goals in 740 total matches. He is a member of the English Football Hall of Fame. Wiki

Gary Speed: As many of you know, Speed died, tragically, 11 months ago. At the time he was manager of Wales. It was Speed's playing career for Leeds, Everton, Newcastle, and Bolton that got him into my team. The left midfielder could play anywhere on the pitch, but excelled as a left-winger. Speed was an excellent header of the ball and his workrate was second to none. In 840 career games 'Speedo' score 134 goals. Youtube / Wiki

John Charles: Many of you may have never heard of "the Gentle Giant", but he was one of the greatest British footballers of all time. Charles began his career at Leeds, but it was at Juventus that he made his name. Charles was so good for Juve that in 1997 he was named the best-ever foreign player to play for the Old Lady. In addition, he was named the greatest foreign player ever to play in Serie A ahead of Maradona, Michel Platini, Marco Van Basten, and Zinedine Zidain. Charles scored 333 goals in 683 career games. Charles was not only an excellent targetman, but was also a top quality central defender. He would often start a game at striker, score and then finish the game out as a centerback. Youtube / Wiki

Robbie Fowler: Yes, this is the man that pretended to snort cocaine off of the goalline. Flair for the dramatic aside, Fowler is the 4th highest scorer in Premier League History with 162 goals. He was seen as one of the most natural finishers in England and he remains the only player in England to have scored 30 or more goals in his first three seasons. In total, Fowler has scored 252 goals in 589 career appearances. Youtube / Wiki

Kevin Keegan: Say what you will about Keegan as a manager, but you're talking about a two-time Ballon d'Or winner. He scored 296 goals in 832 career games. He was quite literally, one of the best players in the world in his prime. He won 4 league titles, an FA Cup, a European Cup, and two UEFA Cups. Youtube / Wiki

Here's how my squad will primarily be lining up: 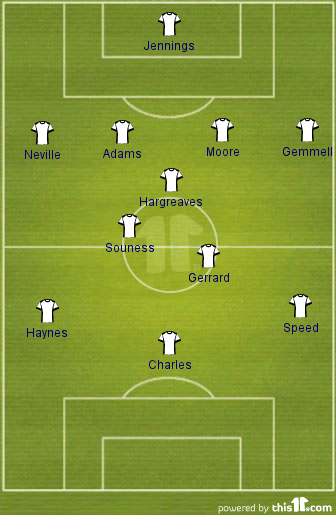 I really toyed with the idea of a 4-2-3-1 with Keegan coming into the squad and Hargreaves coming off, but given the talent that's available in some of the other teams, this 4-5-1 formation seemed most practical. The passing of Souness, Gerrard and Haynes will be a huge asset. Gerrard, who often wanders out of position will have the freedom to just that in this formation, with Hargreaves and Souness covering for him in midfield. Haynes especially will have two excellent headers of the ball to aim at in Charles and Speed.

I'm very confident in most of my defense. Tommy Gemmell is the weak link in the back four, but Speed's work rate, stamina, and ability to play left back will help cover up whatever frailties Gemmell may have. If I want to go more attacking Speed could slot in at leftback instead of Gemmell. The center of defense features arguably the two best central defenders in English football, and in Moore's case, the world. Moore's ability on the ball adds even more skillful passing to my team.