Dempsey is America, Ashlock is a communist, sportsmanship is dead, and oh my god these kids were so lucky. BREAKING NEWS MATTEO SACKED EDITION!

Happy Wednesday, Spursland! Alas, this is (probably) my last day of filling in for Roosevelts on the Hoddle. Don't cry for me, Argentina. For while I depart and will no longer compare Roosevelt's life to various Dustin Hoffman films, I'll just continue to do it in the comments and draw the ire of Uncle Menno. As the old saying goes, "you don't have to go home, but you can't stay here." Well, I mean, I guess I'll be here, but not here. Whatever. Screw it. Go out with a bang I always say. I'll just try to annoy Ashlock as much as possible with this Hoddle by making fun of him at the mention of kids. 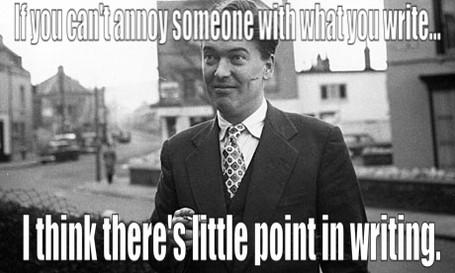 And now for your Tottenham news and links...

Levy Should Look at Himself Before Swinging AVB Axe

The writer is big on his alternate history, saying that sending Rose to Sunderland was a bad move at the time because he was a more natural left back than Naughton (which at the time was ludicrous). Worth a read, though.

Scott Parker Back in Training

Dempsey Wins US Soccer Male Athlete of the Year

Comrade commissar Ashlock is not pleased.

Joshua Onomah is England U-16 Mainstay

From around the world of football...

England just can't have nice things, can they?

Luiz Adriano is a Really Awful Person You Guys

HOW DID YOU BEAT US? HOW? I MEAN REALLY?

EPL Links to MLS Could Grow

Oh sure, England, just use us as your dumping ground for your over the hill musicians and footballers. WE'RE NOT A GRAVEYARD YOU KNOW!

From around SB Nation...

And now we reach the end game of the 12 point plan for revenge on all those dudes who gave us wedgies and swirlies in High School.

24 Saddest QB Controversies of the Past Decade

Cleveland Browns for the past twelve years is underrated.

GUYS, MAYBE HOCKEY WILL COME BACK!

Just kidding, the lockout has already made me dead inside.

Sometimes, the line between SB Nation and Playboy can be so blurred.

And now for something to warm your icy, icy hearts. Especially you, Ashlock. I hope that 'stache is growing in well enough to match your preferred mode of transportation.

BREAKING NEWS THAT I'M EDITING IN NOW AT 04:00 AM BECAUSE, JUST, GOD SOMETIMES GOOD COMEDY WRITES ITSELF!

Wow, just, wow. I mean, what the hell is the point of this? They're third in the table and all they have to do is crush a Norwegian side at home and just expect Shakhtar to continue being awesome. Just, Jesus Christ you guys, what the hell is the thought here? Who the hell is even available right now? Pep won't come back until the summer, Harry Redknapp is available I guess but his preferred tactics don't jive with the current team at Chelsea at all. Chelsea, you are real dumb, you are so dumb.