The football management simulation game Football Manager 2013 allows you to take the reigns of your favorite football club, so let's see how this blogger does with Spurs.

Share All sharing options for: A Football Manager Story: Introduction

I have spoken often of my love for the video game Football Manager. Some of you may play it too, though I'm sure more of you play FIFA. I love Football Manager for two reasons. First, I don't have to control the players on the pitch. FIFA would be much more enjoyable if I didn't have to worry about how long I held down the B button while lining up my shot. Second, Football Manager allows me to control a great deal of minute details at a football club and it is those small details that make the football manager experience such an immersive one.

So, because I am not done with finals and because I do not want to start writing my law review paper, I've decided to start a game of Football Manager with Tottenham Hotspur and blog about it here. If you've never played the game before, you may not understand these posts, but I'll do my best to make sure that things are explained in such a way that even if you've never heard of FM then you can understand what's going on.

I won't waste a lot of time telling you all about the club or the current roster at Tottenham Hotspur. I'll just go ahead and assume that you're all familiar with the players and what's happened at the club in recent years. I will however share with you the expectations that chairman Daniel Levy has for me as the new manager of Spurs. I was given a one year contract with two stipulations. First, that I play attacking football and second that I develop players using the club's youth system.

Obviously, these two tasks didn't seem like much of an ask. Next, Levy expected me to at least qualify for the Europa League, but I felt like the team should aim a little higher and thus I said that our goal was to qualify for the Champions League. Because of those goals I was given the below wage and transfer budget to work with. 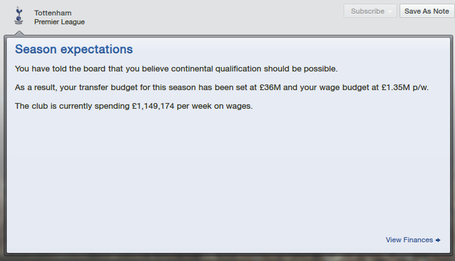 Not bad, right? £36 million is nothing to sniff at and £200,000 per week in wages to play around with should provide me with plenty to lure in some good players. I don't want to get to into transfers just now. That will be the subject of my next post. For now, what I want to do is give you a better idea of how this Tottenham Hotspur squad is going to play.

It would be easy to use AVB's 4-3-3 formation or continue the Harry Redknapp 4-4-1-1, but neither of these managers have styles that mesh well with how I like to play Football Manager. For me, tactics are the most fun part of FM and I enjoy creating and tweaking tactics. However, I'm the kind of manager, like AVB, who has a system and then molds his team to fit into that system. I could give you guys all day to guess which manager is my biggest tactical influence in FM, but you'd never guess it.

In this game, and in a few other saves over previous versions of FM, I will be using tactics that emulate the tactics that are used by Argentine manager Marcelo Bielsa. Many of you probably know him as the current manager of Athletic Bilbao or from his stints at the helm of the Chile and Argentina national teams. I love him and I think his tactics and approach to football are amazing. However, they are incredibly hard to replicate in FM.

For those of you unfamiliar with Bielsa and his team's style of play here's a quick primer. His tactics are built around several basic tenants. First, Always have an extra man at the back. This means against 1 striker formations his teams will line up with 2 central defenders and against teams with 2 strikers they will play three center backs. Second, the team plays a very rigid, high pressure man-marking scheme. Third, the team transitions between offense and defense very quickly and often plays on the counterattack. Finally, the team plays a direct style. This doesn't mean they lump it long, more that they pass through midfield quickly and look to create numerical advantages in attack.

Based on those tenants I've created two tactics for my Spurs team, one with a back four and another with a back three. 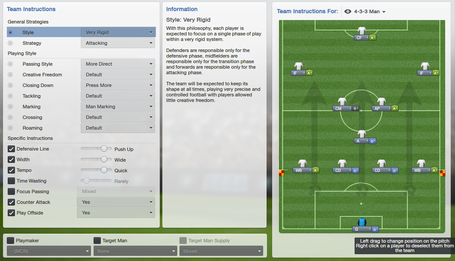 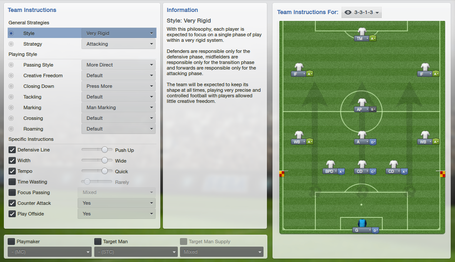 As you can see, the first formation isn't terribly odd looking. It looks like a pretty traditional looking 4-3-3 or 4-5-1 formation. With more and more English teams favoring the continental style of 4-2-3-1 formations this will probably be my teams main formation. I toyed with the idea of pushing the fullbacks further up the pitch, but for now the formation will stay like this. The second formation is a bit out there. The two midfielders are stacked in the middle and the two wing backs will be relied on to support the central midfielders in gaining and retaining possession.

I'm excited to see how these formations work in the Premier League and particularly with Tottenham Hotspur. My first step will be to shape the squad to fit these tactics. In the next post I'll be discussing the comings and going at White Hart Lane as I attempt to remake Spurs in my image.