One disclaimer I will make before moving into the meat of this piece is that trying to put a label on any of Harry Redknapp's (anti-) tactics is a very difficult and unwise way of approaching statistical analysis. That said, for the purpose of this piece, I'm going to try and look at how Tottenham have fared when utilizing both a more traditional 4-4-2 setup, with two strikers, two wingers, and two central midfielders holding some kind of positional discipline, in comparison to how they've fared under the Fuckin' Run Around A Bit (or FRAAB) system, aka 4-5-1, 4-3-3, Christmas Tree, whichever label you prefer- it always entails Bale and van der Vaart drifting in fluid attacking roles while one striker leads the line.

The first conclusion I feel we can draw in comparing 4-4-2 to FRAAB is that it at least superficially appears to utilize Ade in the most provident way. Considering his size, strength and finishing abilities, it may initially seem logical to play Adebayor as a lone striker. When called upon throughout the season to lead the line by himself, however, the Togolese striker has frequently looked adrift and out of ideas, often losing possession in the absence of anyone to link up with.

By contrast, when one looks at the stats for the games where Ade has been paired with someone up front, the results have been evidently better; in most cases, he has been able both to net himself more goals and demonstrate his creative abilities in making chances for a partner more inclined to put the ball in the net. This was clear from his four assists and goal against Newcastle; even excluding Saturday's performance, however, you don't have to delve far into Ade's stats this season to see that playing alongside another striker helps to get the best out of Adebayor. His braces against Liverpool and West Brom in the last half of the season, as well as a handful of his other assists, demonstrate that he's often at his most potent when the pressure is off him to lead the line and the freedom to drift up the wings is allowed him.

Below is a diagram which shows just how far Ade was free to roam against the Toon when he wasn't forced to play ahead of an attacking midfielder. All of the images below come from EPL Index. 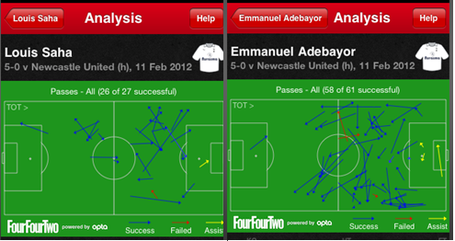 And again in the Liverpool match, where he spent much of the game playing alongside Defoe: 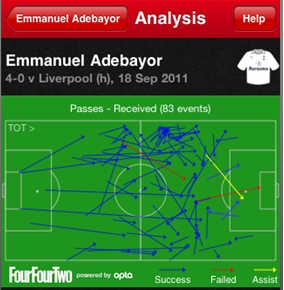 Now I'm not suggesting that pairing Adebayor with van der Vaart renders him useless. Indeed, in terms of sheer talent and goal scoring ability, they're probably the most valuable attacking players we possess when put together. What I am trying to suggest is that maybe a more conventional two-striker system which provides Ade with a partner holds hidden benefits that an obsessive focus on getting our top scorers together on the pitch might lead one to overlook.

Indeed, delving into the evidence even deeper, an analysis of what we did right against Newcastle seems to hint at the second conclusion that link-up play in general seems to be working out for Spurs. Below are some stats which seem to illustrate exactly what might have been going so right for Tottenham against Newcastle on Saturday in the final third.

At times this season we've criticized Spurs for having no bridge between the midfield and the goalmouth when playing a lone man- against Newcastle, having a second striker to link up with seemed to suit the games of both Adebayor and Saha pretty well. Compare these results to the games where Defoe or Adebayor have been forced to try and create something when leading the line, particularly against Manchester City and Liverpool at Anfield respectively, where neither made anything even approaching an impact. 4-4-2 thus seems to allow our strikers to recycle possession better, rather than just losing it trying to go it alone against the opposing centre backs.

A further main contention I want to make in comparing 4-4-2 and FRAAB relates to shot efficiency. 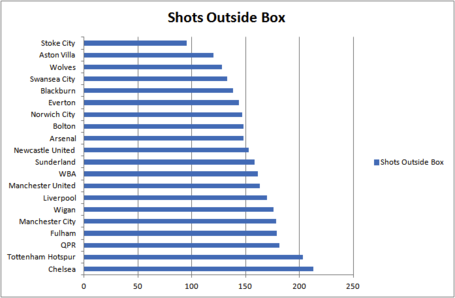 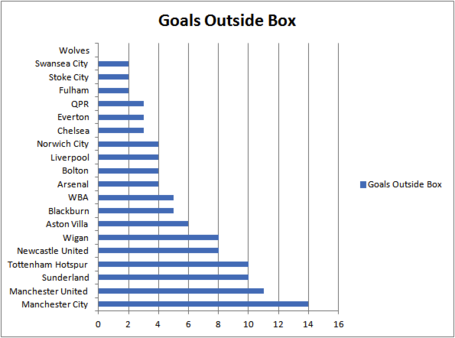 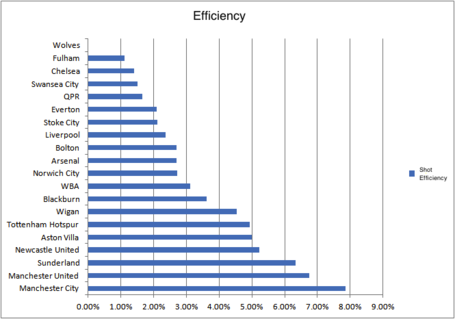 As of the 10th of February, as the tables above show, Spurs are joint third with Sunderland for most goals from outside the box, and second for shots outside the box. Let's look at those stats in detail. Spurs have taken around 150 shots from distance this season- this has yielded 10 goals. One can't help but think that we could achieve a lot more if we tried to cut out all the distance shooting, despite the beautiful goals it has gifted us this year- the third table, which ranks teams by efficiency, hints at this.

FRAAB appears to me to be once again the main cause here, with Bale and van der Vaart the key culprits- when unleashed to indulge their more audacious sides, both players are more likely to go it alone than work the ball into the box. This results in wasteful shooting which drags down the team's chances of boosting our goal tallies. Compare this to the Newcastle game minus van der Vaart with Bale playing a more low-key role- seven shots on target, five scored. Efficiency at it's highest, and it comes from not allowing our players to run riot and from tighter link-up action. Ditto games against teams such as Manchester City, which saw a yield of 7 shots on target from 12 shots.

Putting all these ideas together, what get the impression that 4-4-2 results in slightly tighter play which frees Ade, generates more creativity between the attackers, and prevents wasteful shooting. It doesn't, however, give us this:

Draw whatever conclusions you will.