A Loveletter To Joe Allen, Because I Have Nothing Specifically Spurs To Write About

Share All sharing options for: A Loveletter To Joe Allen, Because I Have Nothing Specifically Spurs To Write About

First of all, the reason why I've said that there's nothing Spurs to write about in the title of this piece is not because there's nothing going on with the team this week. On the contrary, we're approaching our final run in for the end of the season now, we've got recent defeats to pick apart and commiserate over, and we've got transfer talk to kinda sorta start introducing over the coming week. What I mean to say is I personally have nothing to say about Spurs, because essentially all I can say regarding the aforementioned subjects is the same old tosh. Spurs haven't played well of late. Spurs should still be looking at top four and thus need to get better. Here's suggestions about how x and y could help Spurs improve. Quite frankly, I'm done with that stuff now and for the immediate future.

So instead, here's a piece about Joe Allen of Swansea. Yeah that's right, a player who doesn't play for us, hasn't been linked with us and hasn't much causal relevance on anything left in our season now. Why do I want to talk about him? Because he's great. Absolutely tip top, excellent player. And if Spurs knew what was good for them, they would be seriously considering a future swoop for him right now, particularly since he's young, won't break the bank, and it's looking like he's almost had a better season than our previously wantaway little Luka. This is the first of several instances of a "yeah that's right I said it" that will occur in this piece.

At the tender age of 22, Allen is looking like one of the most exciting midfielders in the Premier League today. His playmaking is so effective he's shaping up like a little Welsh Xavi. Think I'm exaggerating? By January, he'd dinked and slotted his way to being in the top ten most accurate passers in Europe. At 90.9%, he's completed more of his attempted passes than Luka has this season, and he ain't just sitting in the middle of the pitch Scholesing either. Allen completes passes all over the pitch, just like Luka, as the sexy, sexy chalkboard below demonstrates. 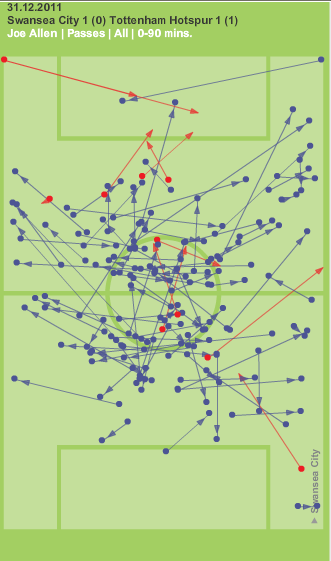 He also finds time to do all this while working his ass off around his own box. Allen completes three tackles per match on average, which is a little under twice as many Luka has. Otherwise, however, he's pretty much a little Luka clone. True, he's a much less attacking player and obviously isn't comparable to our favourite Croatian son in that respect, but in all other respects he's very similar, serving his side as a dynamic box-to-box playmaker. Against Blackburn in Swansea's last fixture in the Premier League, he was a breathtaking, pulsating force, managing 100 touches of the ball, garnering 4 key passes and completing 94% of his overall attempted passes.

Why am I writing this piece now? Good question. I don't really know myself. Rather than getting bogged down in gritty, depressing post mortems of our recent matches, it's just nice to daydream what we could have at some point in the future. Usual caveats: as far as anyone knows Luka isn't leaving, and no club has expressed an interest in him in any concrete way of late. All I'm saying is, if he gets all wantaway again, he's not the only player that does what he does in the League. Joe Allen is awesome and does broadly the same thing, while having the rosy glow of someone four years younger following him everywhere. Yeah, he's not proven enough yet maybe, but we bought Pav off the back of one good game, and yeah I said that too.

I think I'm in love with Joe Allen. That's all I can say.