Tottenham Hotspur Goal Analysis: This Is Why We've Missed Azza

Share All sharing options for: Tottenham Hotspur Goal Analysis: This Is Why We've Missed Azza

In recent weeks, Tottenham have been using Kyle Walker to provide width down the right wing to compensate for our lack of Lennon. While Walker possesses the right kind of attacking intent to fill the role and pace to match it, where he tends to fall short is in his decision making in the final third of the pitch. More often than not, Walker demonstrates in his adventures down the right an inability to think two steps ahead and mentally integrate himself into a completed attacking move, instead showing a single-minded focus on how he'll get rid of the ball. In practice this means that nine times out of ten we'll see him attempt to cut it across to one of our forwards or try and bomb straight for the byline and attempt to cross in ways that are often highly telegraphed.

What Lennon brings to the team when reinserted into our lineup, by contrast, is an underrated level of footballing intelligence. When attacking the opponent's goal, Lennon has shown an excellent ability to rapidly make unexpected and acutely situationally aware choices, which when married to his blistering pace makes him an unpredictable and persistent threat for opposition defenders. This kind of quick thinking was clearly demonstrated during his return to the first team against Swansea on Sunday as he came off the bench to cause all kinds of havoc around the opponent's penalty area and ultimately bag an assist. Video analysis after the jump.

Lennon's qualities of speed, control and decision making were never better illustrated against Swansea then during the buildup to the final goal of the game in the 85th minute of the game, a chance which he single-handedly orchestrated and then capped with an assist, putting in a perfect cross to Emmanuel Adebayor's head. As you'll see below, Lennon initially receives the ball after an attempt on goal by Bale is turned away by Michel Vorm just outside the Swansea box and the rebound is turned away high into the air. Three Swansea defenders stand between him and goal, and they're perfectly placed to marshal him away from goal. 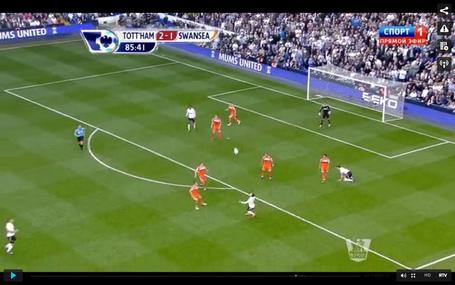 Having controlled the ball, Lennon takes a heavy touch away from goal, drawing Leon Britton away with him. This immediately puts a considerable amount of breathing space between him and the three waiting defenders in around the box. 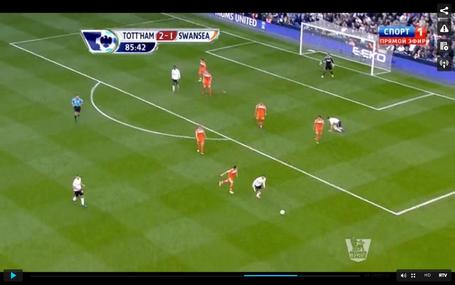 With a sharp turn back towards goal and a sudden burst of pace, Lennon has now taken the other three defenders out of the game and is free to take a good run at the goal should he beat the Swansea No. 7. 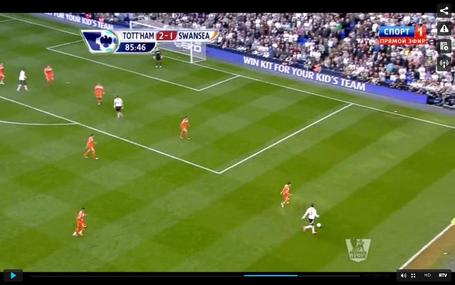 With his last touches before he crosses the ball for Ade to nod home, Lennon demonstrates fantastic trickery with a body feint that completely throws Britton and suddenly he's left in a huge pocket of space to make a cross. 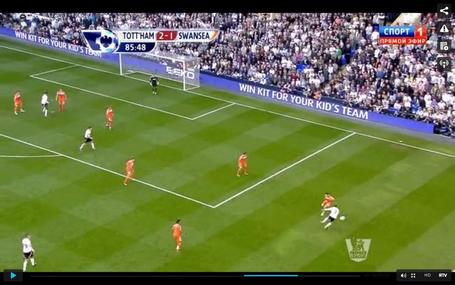 In this short move, Lennon demonstrates exactly why we've been missing him. In creating the chance he demonstrates how comfortable he is in situations where he has to get chalk on his boots to create, something Spurs have lacked on the right hand side in his absence. He gets right to the byline not merely through the use of his pace, but with a fantastic display of intelligence and quick thinking which leaves four players who possess the potential to halt his run in his dust. For all the issues people might have with his final ball, Lennon's ability to produce something out of the tight areas in the corners of the pitches remains unparalleled.