Presenting the Barclays Premier League: Cast as Members of Community

Share All sharing options for: Presenting the Barclays Premier League: Cast as Members of Community

Due to my crippling lack of creativity and a late night television binge, today's article is brought to you by the zeitgeist. Rather than deeply examining an issue facing the team, looking ahead to our next fixture, or just talking about football, I'm copping out and giving you an article casting the twenty EPL teams as characters from Community. Maybe it's the lack of ability to post Allison Brie gifs now, but this will surely be fun and create some spirited discussion. Just imagine, if Bill Simmons were twenty years younger he'd dilute this into a 5,000 word column that would still somehow devolve into a 500 word aside about Teen Wolf.

Manchester United - Jeff Winger: I mean, come on, isn't it obvious? Hugely successful, somewhat arrogant, a humongous ego, Manchester United make the perfect Jeff Winger. Just as Jeff managed to hook up with Annie, Britta, and Slater all in one season, Manchester United are the last English club to pull off the treble. Though not nearly as dominant in recent history, due to have a fake law degree and Ryan Giggs finally aging, they're still both on the top of their game when compared to everyone else that is around them.

Relevant Jeff Winger Quote: What do you mean I can't beat him? You and I are going to study harder than we've ever studied before and beat City College tomorrow.

Manchester City - City College: Unable to simply assign a single character to Manchester City, I gave them an entire college. Just like the current Manchester City, City College thinks that it is in a much better class than Greendale College is, and is not afraid to spend ludicrous amounts of money to prove that point. Paying paintball playing ringers to compete in their winner take all competition, offering million dollar prizes in an effort to complete destroy every other character on the show, how does that not scream Manchester City? Manchester City would TOTALLY set up a paintball machine gun on the quad to tilt the field in their favor. Sadly for them though, Manchester United/Jeff Winger is always there to put them back in their place.

The Living Embodiment of Manchester City: 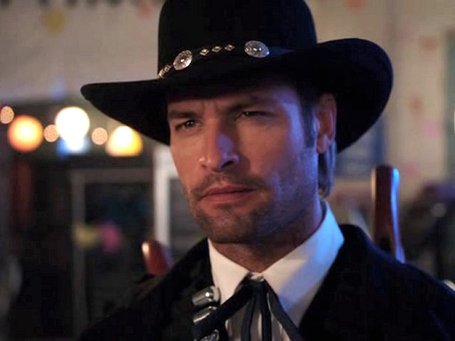 Tottenham Hotspur - Annie Edison: Annie Adderall. That's Tottenham Hotspur. Constantly stressing ourselves out at trying to be the best and constantly getting in our own way from being the best. Looked at as the little kid by the other clubs/characters around us, our innocence lent us an advantage as we stealthily worked our way up into being one of the best characters in the main group. While yes, we may not have that much money and have to share and apartment with Troy and Abed, we're smart and use what we've got to give us an advantage. In terms of aesthetics, we're the best or near the best in terms to our beauty of play and, well, beauty, and seem to be an attractive club for Americans to become fans of.

Relevant Annie Edison Quote: It's like Prom. There's a contest and if you win you get to wear a sash and a crown and I am so jealous Britta I wanna murder you. Aren't you excited?

Arsenal FC - Britta Perry: Now you see why Annie's quote is relevant. Fear not though, CFC readers. Arsenal play beautiful football, and Britta Perry is beautiful. However, underneath that beauty is, well, vapidness and a complete overestimation of their own abilities. Adding to the awesome parallel, both are know to Britta things when it is least opportune! Trying to hook up with Jeff Winger? Britta'd. Trying to win the league? Britta'd. Despite these facts, both remain crowd favorites, and seem to somehow always sidestep total and complete failure. And while Britta and Annie/Tottenham and Arsenal have a bit of a rivalry with each other, and like to claim how different they are from each other, as Shirley would describe, "Yeah, you're both so different. Skinny bitches."

Britta: See you at Denny's?

Jeff: Denny's is for winners.

Chelsea FC - Abed Nadir: The character who constantly makes pop culture references and riffs is the perfect parallel to the team that seems to be a wacky sitcom. Eccentric Russian billionaire owner, the amazingly expensive foreign transfer player (Torres), the voice of reason (Essien), Chelsea is a team that was seemingly assembled by Hollywood screenwriters. Both are successful and popular, and both quite often win. Both are often kind of sterile as well, Abed not knowing how to relate to people that well and Chelsea playing good, but visually bland football. The true genius of both shines through when they take on another form (Abed as a Han Solo character, Chelsea as a Jose Mourinho team).

Relevant Abed Quote: When you guys first came in, we were as wholesome as the family in the Brady Bunch. Now we're as dysfunctional and incestuous as the cast of the Brady Bunch.

Newcastle United - Alex "Starburns" Osbourne: Their success seems to come to them despite their lack of visual presence. They also seem like a match made in heaven. They enjoy the attention that their unsightly feature gains (Starburns/Mike Ashley) but want an identity outside that, adding to their ensemble a top hat and Papa Cisse. Newcastle supporters kind of seem like a seedy bunch based on appearance, and Starburns is a drug dealer. Their also both kind of laid back and not the sharpest looking bunch, but they get the job done.

Relevant Starburns Quote: What did you give me? My heart stopped racing, and I can't pee.

Everton FC - Shirley Bennett: The counterpart to their nearest contemporary, Everton and Shirley both do the best they can with limited resources. When Shirley got divorced, she went back to school to develop the skills necessary to open up her own brownie shop. When Everton lost Wayne Rooney to Manchester United, Everton buckled down and began to do more with less and be more economical.

Relevant Shirley Quote: And this isn't the school paper. It's the real thing. There's a Marmaduke in there.

Liverpool FC - Pierce Hawthorne: This is so self explanatory I've not even going to bother.

Relevant Pierce Quote: You know when I was 30, people used to wish I was dead to my face. Now that's respect.

Sunderland FC - The Greendale Human Being: Featureless, emotionless, kind of creepy, without the ability to stereotype. Sounds like a Sunderland game to me.

Fulham FC - Dean Pelton: Always mid table, seemingly upbeat, Fulham as a team seem to have a lot of fun playing a game despite their lack of success, just as Dean Pelton is ridiculously happy despite being a pretty terrible Dean. Highlighted by their breakout performances of the past year (Clint Dempsey going HAM and Jim Rash getting an Oscar), both seem just one small step away from having a complete psychotic or team breakdown.

Relevant Dean Quote: This is the second glee club we've lost in two years. And to think they were this close to regionals.

Swansea FC - Troy Barnes: Beautiful, smart, different, giving me the weirdest boner. These can all be used to describe Swansea's style of play, as well as Troy Barnes. Both are new to the Premier League/College but both have handled it with aplomb, quickly cementing their place as an integral cog in the overall viewing experience. They both have all the potential in the world and bring a much needed spark.

Relevant Troy Quote: Hey, guys! Thanks for taking ugly Annie out of the palm of my hand and turning her into another hottie that will never get with me!

Norwich City - Annie's Boob's: Troy/Swansea's companion, vastly overshadowed by them, but just as successful as their more well known owner/counterpart.

Relevant Jeff Winger Quote: SHUT UP LEONARD! NOBODY KNOWS WHAT YOU'RE TALKING ABOUT!

West Bromwich - Professor Duncan: If West Brom were a person, it would be teaching psychology at a community college, and have a drinking problem.

Aston Villa - Ben Chang: Both are wildly inconsistent, both fluctuate between positions of relative power and the possibility of falling off the map completely. Both are also broke and hoping to barely stay afloat.

Bolton Wanderers - Magnitude (Subject to Change): This would have made more sense if Bolton still had Gary Cahill, and was a one note team with one star just as Magnitude is a one man party with just one line. Can't think of who to change them to though. POP WHAT? POP WHAT BOLTON?

Queens Park Rangers - Amber: Like Pierce's stepdaughter, QPR this season turned out to be kind of hollow and despite all of that money not that good of a team/person.

Blackburn Rovers - Buddy Austin: Despite the fact that no one ever noticed them, Buddy was part of the study group for and day and Blackburn actually won a Premier League title once.

Wigan Athletic - Garrett Lambert: Did we really save Garrett/Wigan? (The answer: no)

Wolverhampton - Fat Neil: Like Neil before the intervention, Wolves are without hope and probably close to just killing themselves with their inability to stay up.