Mid-May, and the muggy afternoons ring in the changes. As a teacher, my days go from overwhelming business to acres of unstructured time. I write, spend some time outdoors tending the garden and the yard, take walks with my wife, volunteer at the humane society. But without the strictures of class and the ever-present demands of grading, the mind tends to wander into familiar cul de sacs: replaying failures, anxiously fingering the frayed hem of the past year. And, of course, scraping the corners of the internet for Tottenham Hotspur transfer news. I've decided, though, that this summer is going to be different. I'm going to take a thing I know, a thing I love - poetry - and let it shape my soccer obsession. I'm still unsure of my footing when it comes to understanding the sport of soccer, but I feel as though I know just enough now to begin stretching my thinking beyond the cultural aspects of Tottenham Hotspur and into the actual game itself: tactics, philosophies, players and managers. Amongst some other possible work, and taking my cues from Uncle Menno's transcendent article on Spurs and the poetry of Jalaladin Rumi, I'd like to combine two of my loves - poetry and soccer - into a recurring series of summer meditations. I'm calling it "17 Syllables."

Late 17th century Japan; an old man (or, in his late 40s, old for his time) leaves the relative comfort of life as a semi-professional poet and lay Buddhist monk in Edo and spends his last decade traveling the length and breadth of the main Japanese island, Honshu. By all accounts, Matsuo Bashō - "Bashō" was his pen name, taken from the broad-leafed banana tree that anchored the garden outside the gamekeeper's hut that was his home - could have easily seen out his days in the city that became Tokyo. After losing his home in a city-wide fire, his students and friends raised enough money to build him a new house, and transplanted his banana tree to its modest yard; but Bashō seemingly took the fire as a sign. He had been studying Zen Buddhism and the quiet lyrical poetry of the Chinese masters, and the fire gave him an opportunity to practice the non-attachment and openness of mind preached in Zen monasteries. So Bashō took the road, living as a transient, semi-impoverished literary celebrity, sleeping in doorways and the guest houses of monasteries and shrines up and down the main island. Its during this time that Bashō writes his best haiku, often in the midst of prose journals that chronicle his movements. Indeed, instead of feeling separate from the rest of Bashō's observations about life on the road in medieval Japan, the haiku feel natural as fruit on a tree, a sweet, crisp, contained outgrowth of his living and being. 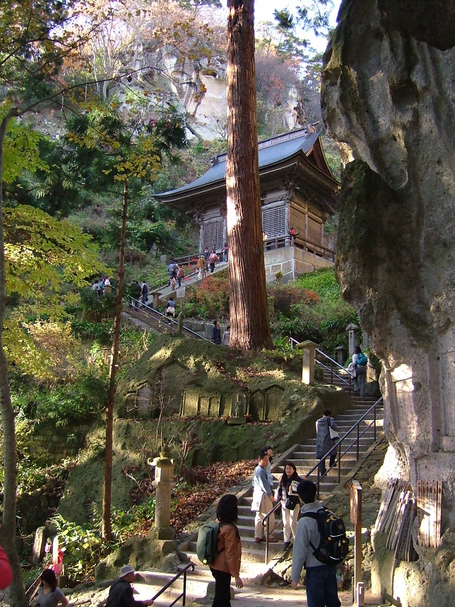 One summer found Bashō in Yamagata prefecture in the northwest of the island, at a temple called Ryushakuji, which Bashō, in Robert Hass's brilliant English translations of his work, describes as "an unusual well-kept quiet place." [pictures from Wikipedia/Creative Commons] The old master describes his meandering exploration of the mountain hillsides around the temple. Notice how the accompanying haiku seems to emerge, almost unbidden, out of his recounting of his journey:

This mountain one of rocky steeps, ancient pines and cypresses, old earth and stone and smooth moss, and on the rocks temple doors locked, no sound. Climbed along the edges of and crept over boulders, worshiped at temples, penetrating scene, profound quietness, heart/mind open clear.

A few things worth noting here: when you and I learned haiku in school, we were told in no uncertain terms that haiku consisted of three lines of 17 syllables - a line of five syllables, followed by a line of seven syllables, followed by a concluding line, also five syllables. So when we read the haiku above, our first reaction is to count, and when we realized there's only two syllables in the first line of Hass's translation, we freak out.

Let me allay your concerns. First and foremost, Hass emphasized spareness and feeling over correct syllable count; that is, we should anticipate the profound austerity we might expect from a form that limited its practitioners to 17 syllables, even while the syllable count of the actual translation may get fudged a little. And that leads us to a second observation, which is that, despite what your middle school English teacher told you, a haiku is not - or more accurately, is not merely - a syllabically stunted poem. In fact, any haiku worth its salt contains allusions to other famous poems, nuanced seasonal information, and a profound knack for conveying a natural scene with just a few strokes of the pen. It's an amazing form when handled by a master (which Bashō undoubtedly was), with the depth of a Bruegel painting, only without all the people, and drawn with three lines only.

The haiku above is one of my favorites. It perfectly captures the late summer afternoon feeling. We know it's summer because of the cicada, and we know we are moving toward evening because that's when cicadas cry. And the first line - "Stillness -" - is as resonant as the rocks in the last line. If you're anything like me, when you read "stillness," you think "silence," which, as those of us who live in places where cicadas are a regularity during the summer months, seems profoundly inaccurate. But that's part of the poem; Bashō is telling us that stillness and silence are not equivalent, and that the drone of the cicada in the syrup-heavy summer air can lead us to understanding and mindfulness in the same way a quiet room can.

I've returned to this poem again and again this season while watching Spurs, in part because I feel it describes the moment when the team hits the perfection we saw in glimpses throughout the year. You can supply your own instances here. I've kept returning to this poem because it tells me something about Tottenham at its best - and it can be used, I believe, to inform the direction of the club going forward.

The key to the poem lies in its center: the cicada. Cicadas are tiny, shapeshifting animals, crawling out of the ground after years of incubation, shedding their skins on the trunks of trees, climbing to some high, leafy crook and blasting their song into the atmosphere. They are instruments of noise and reproduction. They act in concert, waiting their turn as others cicadas wind up and down, so as to be better heard. In Bashō's poem, the cicada's song saturates the scene; it "drills," as Hass translates it, "into the rocks." (Others have translated the verb as "saturates," which seems less cicada-y to me.) The rocks magnify the scream of the tiny creature, until the shrill pitch hits a critical point, and a kind of transcendent, overwhelming peace occurs.

For Tottenham Hotspur and in this analogy, the cicada must be Luka Modric, creator and sustainer of the deafening stillness of Spurs at their best. Though he does not score much (he should probably score more, but never mind), Modric uses his teammates as a kind of sounding board, which amplifies and shepherds movement, and ultimately, the ball, toward and into the opposition's net. A cry drilling into the rock, indeed.

This means several things for Tottenham Hotspur this summer. The first is that they need to do all they can to keep hold of Modric, &, for safety's sake, secure a backup with similar talents to work as an understudy. (Joe Allen, I'm looking at you.) Without the point of resonance; without the cicada; without Luka Modric, Spurs often return to a more deep-lying, counter-attacking team, as when Modric went out with a broken leg early in the 09-10 season, and Tom Huddlestone and Niko Kranjcar directed the attack from deeper in the pitch. This was effective in its own way, but was not (& is not) Spurs' best system.

The second lesson we can take from Bashō's poem is a need for stronger tactical direction from the sidelines. When Bale and Lennon suddenly switch, or Bale pushes into the middle, the amplifying effect and resonant space that occurs when Spurs wingers keep to the chalk is dampened significantly. And as we saw with Lennon's injury, Spurs play a stunted game without a natural threat on the wings to pull defenses out to the edges of the pitch. Cicadas use space and reflective surfaces to throw out their song; Bashō's haiku, by drawing strongly on the interplay between sound and solid walls (the rocks of the mountainside), increases the volume, pitch and resonance of the little bug. A tiny being overwhelms the scene by using his surroundings to create something larger than himself. That's Luka, through and through. Why minimize that echoing effect?

The final and perhaps most immediately pressing lesson we can take from the old master has to do with Spurs' front line. We know that Spurs must secure a top-notch striker this summer in order to move to "the next level" (whatever that is). The logic is, a better striker will make Spurs a better team, and that logic, such as it is, is almost certainly sound. I was excited when Spurs signed Emmanuel Adebayor on loan, as my memory of Ade was of a rangy striker with tremendous touch, a player who could be counted on to act as another resonant surface off which Modric could ping his symphony. And there have been games - Newcastle at home, most notably - where Ade did just that, with Saha sitting in and around the D, waiting for sharp balls from his strike partner to come careening into his path. But Ade has been inconsistent in his contribution this year, less in terms of goals - 16 in a season is not a terrible return - as in his ability to help create goal scoring opportunities for those around him. Whoever Spurs sign this summer - be that Ade or someone else - must be ready to create chances for others, as well as to take their own. (Below are the highlights from the Newcastle match; pay special attention to the third & fourth goals.)

Tottenham vs newcastle 5-0 highlights (via IIsniipScopZzII)

So when I wake up at 4 a.m. some June morning, instead of clawing wildly at the transfer possibilities tossed out like so much trash by the red tops, I'll instead look to create in my life the mountain stillness Bashō describes - not silent but sonorous - and I'll look for Spurs to create the same.