Rafael van der Vaart is heading back to Germany. The Dutch midfielder has completed his move to Hamburger SV according to the German club's twitter and also Tottenham Hotspur's official site. Below you can see a picture of Rafa with his new shirt. 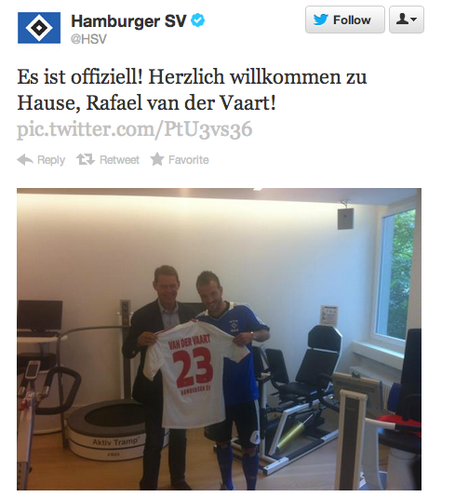 The fee is rumored to be in the neighborhood of £10 million. This represents a pretty good bit of business for Tottenham Hotspur when you consider that Spurs paid £8 million for Rafa. The 29 year-old now rejoins the side that he spent 3 years with winning two UEFA Intertoto Cups.

This clears a little bit of the logjam in the attacking midfield position for Tottenham Hotspur who with new signings Gylfi Sigurdsson and Moussa Dembele were going to struggle to find minutes for everyone unless manager Andre Villas-Boas decides to play with 8 midfielders.

The other benefit to selling Rafa is that it keeps the prospect of the club breaking even in this transfer window alive.