Clint Dempsey - How Will The American Pair With Gareth Bale In The Tottenham Attack?

Share All sharing options for: Clint Dempsey - How Will The American Pair With Gareth Bale In The Tottenham Attack?

This summer Tottenham Hotspur hired a manager, Andre Villas-Boas, who employs a formation in which the traditional chalk hugging winger many expect to see in English football is not really used. Instead, the Portugese manager wants his wingers to operate as wide forwards (or inside forwards whatever you preference for terminology is). Many of us were certain that Gareth Bale could handle this role for Spurs, but questions remained about whether or not Tottenham had a player who could fulfill that role on the right side of the pitch.

Aaron Lennon is a good winger and has tons of pace, but his finishing ability is not ideal for the role of wide forward. To help Villas-Boas implement his system Tottenham Hotspur chairman Daniel Levy went out and bought AVB an ideal player for the wide player role: Clint Dempsey. Dempsey has played as a wide forward for Fulham in the past, the only problem being that Dempsey often occupied Bale's preferred left side of the pitch.

It remains to be seen just who AVB will use the two together. It's uncertain which will be shunted over to the right side of the pitch. Both are certainly capable of playing on the opposite side. If I were to bet I would say that it will be Dempsey who gets moved for some reasons we'll explore in a minute.

Now that Spurs have figured out who their wide forwards are, let's take a look at just what Tottenham are getting from the pair.

Clint Dempsey played one more game than Gareth Bale during the 2011-12 English Premier League season which consequently gave him more minutes played than Bale. However, they were on the pitch about the same amount of time per game (all data via EPL Index).

In terms of keeping possession and passing both players were again pretty equal. Dempsey lost possession a little bit more frequently than Bale, but no so much more as to make a huge difference. Bale, despite being on the pitch less made and completed more passes from open play. Both players, however, completed passes at a similar rate. Both players operated as the focal points for their respective teams, but Tottenham Hotspur averaged 56% of possession during matches while Dempsey's Fulham managed an average of only 48.9% (via whoscored.com).

Given the disparity in possession, it would seem that Dempsey played an even bigger role for Fulham than Bale did for Spurs. Whether this meant Dempsey was doing more to drop deep and pick up possession and help link up play or this just meant Fulham force fed him the ball remains to be seen. One thing I think this definitely means is we won't see games in which Tottenham are unbalanced. Too often last season Aaron Lennon disappeared on the right flank. Dempsey should compensate for that. My only real worry is whether there is enough of the ball to go around.

Here's a chalkboard of what Dempsey and Bale did in Tottenham Hotspur's 3-1 victory over Fulham last November (Dempsey did not start in the two club's late season matchup). This chalkboard shows the passes each received. As you can see it was Bale, not Dempsey that was dropping deeper and receiving possession in his own half. We can also see that Dempsey drifted more into the center, where Mousa Dembele was playing, to pick up possession. Dempsey also received a lot of passes in the penalty area, something Tottenham's attackers have struggled with this season. 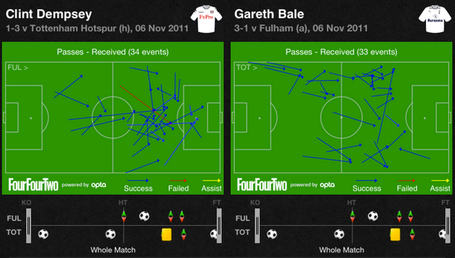 This chalboard would also seem to indicate that no matter where Dempsey is going to play, left side or right side, his inclination will be to drift into the middle. This should create plenty of space for Kyle Walker on the overlap, but could also leave Tottenham Hotspur exposed on the counter-attack. In Villas-Boas more rigid system Dempsey may be asked to hold his position a little bit more than he was under Fulham manager Martin Jol.

Other than a wide forward Tottenham Hotspur also needed a little creativity in the team. This became even more true following the departure of Croatian playmaker Luka Modric to Real Madrid. The Club brought in Mousa Dembele as a Modric replacement, but more creativity in the forward line would have also been welcome. Gareth Bale is not the sort of technical, tricky winger we think of when we talk about creativity, but he did do a lot in terms of creating chances for his teammates. Dempsey? Not so much. 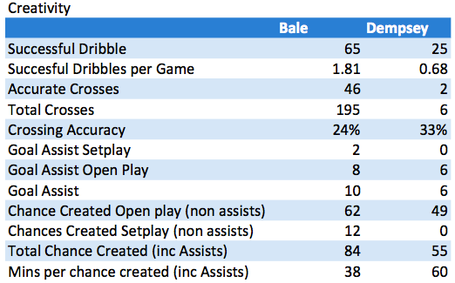 First, Dempsey is obviously not the type of winger to get the ball and run at fullbacks. Dempsey is much more adept at finding space, getting into it and scoring goals (as we'll see in a bit). Bale, however, is perfectly comfortable taking the ball, running at the opposition, and delivering a cross. Dempsey crossed the ball a grand total of six times last season. SIX! So obviously we shouldn't expect more service into the box for Bale or new-ish signing Emmanuel Adebayor to get on the end of. Bale, however, may see his crossing stats go up now that there is another capable attacker, in Dempsey, able to get on the end of his crosses.

In terms of all chances created Bale did a much better job. He created almost 2.5 chances per game, whereas Dempsey created only 1.5. This could be related to the goal scoring disparity between the clubs and the sheer talent of the players in the respective teams. I would not be surprised to see an uptick in Dempsey's chances created stats simply by playing with players like Bale and Adebayor.

The numbers we really care about though, especially given the way this season has started for Tottenham are the goal scoring numbers. Dempsey had a career season last year for Fulham. Expecting him to reproduce that fine form might be a big ask, but still double digit goals from the American should be a reasonable expectation. Bale scored only 9 goals in the league last season, his highest ever output in the league. 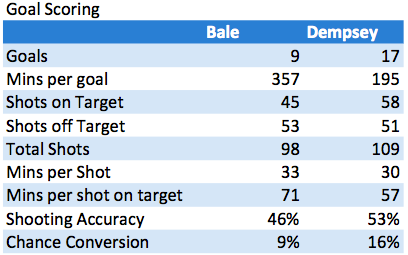 One thing jumps out at me immediately from these numbers. Dempsey converts his chances at a much better rate also more accurate with his shots. I have often criticized Bale's wasteful finishing and here it is in black (blue) and white. Bale gets off an accurate shot every 71 minutes. Dempsey does much better getting a shot on frame every 57 minutes. Unlike some of the passing stats, I find it more difficult to predict a better performance from Dempsey this season. Goal scoring is a tricky proposition no matter who you play for and I feel like, as mentioned earlier, last season was a career year for Dempsey and we won't see the likes of that from him again.

At the end of the day, what Tottenham Hotspur have gotten themselves is a player who is very similar to Gareth Bale. Both are strong players who have an eye for goal. Bale is better as traditional winger and Dempsey is better as a goal-scorer. Both players should compliment each other very well over the course of the season and expect them and Adebayor to form a productive partnership in Tottenham Hotspur's attack.