Another round of matches in the 2012 Barclay's Premier League has passed and for the third straight week Tottenham Hotspur have turned in what could best be described as a disappointing performance. When most fans looked at Tottenham's opening five matches of the season I think a lot of us set a target of at least 10 points from those opening matches. Aside from opening the season at Sports Direct Arena against Newcastle all the other games certainly looked winnable. So far though, things have not been so easy for Spurs.

Sure, Tottenham have been in position to win each of their two most recent fixtures, but late capitulations on penalty area scrambles have resulted in two late equalizers and four dropped points. Victories in those two matches would put Spurs level on points with three other clubs for fifth place and only three points back of first. Instead, Spurs sit on two points and in 14th place.

That, however, is enough about what might have been. Let's take a look at what actually transpired in Tottenham's 1-1 draw with Norwich City at White Hart Lane.

This is the first time this season that Tottenham faced a team playing a two striker formation. It was also another test against a physical striker in Grant Holt. Tottenham's centerback pairing of William Gallas and Jan Vertonghen looked totally confounded by Romelu Lukaku last week, but I'd have to say that this week the pair handled Holt much more effectively. This could, of course, be due to the fact that Holt is more of a "one-trick pony". He lacks the pace and dynamism that Lukaku possesses, but that doesn't make him less difficult to deal with.

The thing that jumps out most to me is the sheer number of passes each member of Tottenham's back four made in this game. Each completed more than 50 passes. Jake Livermore was the only other player to complete at least that many passes. New signing Mousa Dembele complete 23 passes in just 45 minutes worth of action, so I would imagine if he were given a full 90' we would have seen a more productive outing from him.

I'm not entirely sure what that number of passes says about how Spurs played though. On the one hand it shows that the team was comfortably in possession during the match. Save for a few spells that is true. Tottenham outpassed Norwich by more than 200 pass (548-341) and yet were still unable to come away with a result. On the other hand, this could show that Spurs were sitting deeper and were really unable to push the ball into the attacking third. This, I think is definitely true, especially when you look at the action zones for this match and where Tottenham took their shots from (via whoscored.com). 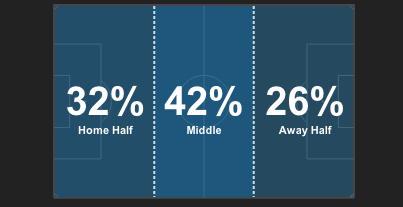 This shows where the action in this match took place. Nearly half of the action in this match took place in the middle of the park and despite Tottenham's possession they were unable to really force the ball into the final third. The fact that the ball was in Tottenham's half for nearly a third of the match would certainly account for the high number of passes shown by Tottenham defenders. This is concerning for me, because this isn't the opposition pinning Spurs back in their own half, this is Tottenham's inability to create forcing themselves deeper than they'd prefer.

Now, here is a chart of where each team's shots came from. Tottenham's stats are on the left (in blue) and Norwich's are on the right (in orange). Tottenham did an extremely poor job of working the ball into the box and getting off shots. Having 80% of your shots come from distance is not a recipe for success. Meanwhile, Norwich were able to capitalize on their counter-attacks and create chances that came inside the penalty area on two-thirds of their shot attempts.

On the positive side of things I thought Jan Vertonghen looked excellent. The Belgian looked much more comfortable in his second Premier League match and I thought he dealt quite well with both Grant Holt and Simeon Jackson. Vertonghen won 11 out of 12 aerial duels and made a number of clearances. He was, in my opinion, the best Spurs player on the pitch. Keeper Brad Friedel also had an excellent outing. Facing the prospect of losing his starting role Friedel turned in his best performance in a long time making a number of key saves to keep Tottenham in the game. Unfortunately for him, there wasn't much he could do to stop Robert Snodgrass' late equalizer.

As for the negatives, Gylfi Sigurdsson was bad, again. I can't believe I'm saying this, but I hope that Spurs switch to manager Andre Villas-Boas's preferred 4-3-3 formation using Clint Dempsey on the right and a midfield three of Dembele, Sandro, and Livermore. Gylfi just isn't getting it done at Spurs. He's not on the ball enough and when he is he isn't creating enough. I would like to see him play with Adebayor some, but at this point he needs some time on the bench. Gareth Bale also deserves some criticism. He's yet to score, which isn't so bad, but he's taken 11 shots. That's more than any other player without scoring (via Football365). I've bemoaned the clubs lack of finishing and efficiency before, so this isn't anything new, but all the players need to start hitting the target more often.

Finally, I'd like to reserve a special section to criticize Tom Huddlestone. Tom, you were on the pitch for all 7 minutes before you were shown a straight red card for what was an incredibly stupid tackle. I know you're probably not match fit and you're probably eager to prove to your manager that you have a place in the team, but you have to be smarter than that. Jonathan Howson was going to win that ball, but he wasn't going to do anything meaningful with it. Stay on you feet, pick up the ball and start an attack. Don't slide in late with your studs showing. That was an idiotic thing to do. Do you think you'll get to play more after that? I doubt it.

So, what do Tottenham Hotspur need to do to win a match? Quite frankly, it's the same things that it has been all season. Get better play from the midfield and finish better. I'm interested to see how Dembele does linking the attack and the defense (particularly if played in a three-man midfield or alongside Sandro). I also want to see Emmanuel Adebayor get a full 90 minutes and Dempsey playing on the right. One thing that may help swing things in Spurs favor is the return of Scott Parker. If Parker plays the runner role in midfield alongside Sandro and Dembele who knows what could happen.

Tottenham have two more matches before they meet Manchester United and it would be great if Spurs could get six points from those games so they don't go into Old Trafford needing a win.