The other Kyle: Why Kyle Naughton may be Spurs' best option at LB going forward

Kyle Naughton has quietly proven that he can not only fill in for Benoît Assou-Ekotto, he may be able to replace him.

Share All sharing options for: The other Kyle: Why Kyle Naughton may be Spurs' best option at LB going forward

Kyle Naughton signed for Tottenham Hotspur in 2009, part of a £9m deal with Sheffield United that included both himself and his teammate Kyle Walker. While specific details of the transfer have not been made public, to no one’s surprise it was Walker who received the lion’s share of the attention, and who, it was surmised, constituted the bulk of the transfer fee. After all, it was Walker, with his scorching pace and freakish athletic ability, who was so highly rated, and it was Walker who was recalled from his return loan to Sheffield in order to serve as cover for Alan Hutton.

But while Walker entrenched himself as a backup and later a starter at right back between 2010 and 2012, Kyle Naughton, the forgotten Kyle, equally comfortable at fullback on either side of the pitch, saw himself shipped off for increasingly successful loan spells at Middlesbrough, Leicester City, and finally Norwich City. It was at Norwich where he had his breakout campaign last season, displacing Russell Martin and firmly establishing himself as the Canaries’ starter at right back. It also proved to Norwich’s then-manager Paul Lambert that Naughton was an emerging EPL talent.

Still, at the beginning of this season Naughton could at best be seen only as a young stop-gap backup to Benoît Assou-Ekotto and Kyle Walker. It didn’t seem very likely that Naughton would see much of the pitch; perhaps another loan was likely? But André Villas-Boas’ appointment, Younes Kaboul’s and Assou-Ekotto’s long-term injuries, and finally Danny Rose’s loan move to Sunderland, allowed Naughton an opportunity to stake his claim for the first eleven. Villas-Boas didn’t see it that way, however, preferring to move Jan Vertonghen out to left back (where he has played for Belgium) for the majority of the early games this season, while slotting in William Gallas and, eventually, Michael Dawson.

While Vertonghen has been serviceable at LB this season – witness the remarkable game he had at Old Trafford earlier this fall – it’s not his preferred position, and definitely not his best position. Gallas’ age, susceptibility to niggling injuries, and declining ability has been fortuitous for both Vertonghen and Naughton, allowing Jan to move back to the center of the back line, and for Naughton to get his chance (finally!) at left back with the first team. And he’s made the most of his opportunities.

It’s hard to argue that a healthy, on-form Assou-Ekotto isn’t the best option at the left fullback position. Assou-Ekotto quietly ended up as one of the best LBs in the EPL last year and is a fan favorite at White Hart Lane. He's a better passer and crosser of the ball than any of the other fullback options at Tottenham. But "Disco Benny" is now 28 years old and is at the point where Spurs need to begin thinking about other options going forward. A return to last season’s form after such a long injury may be possible, but it won’t happen overnight, and may not happen at all. For sake of argument, let’s assume for the moment that Assou-Ekotto is not a long-term viable strategy for Spurs, which leaves Naughton and Rose to battle it out for the starting left back position.

The efficacy of Assou-Ekotto wide left last season was predicated on his interplay and communication with Gareth Bale, as well as his ability to provide width and get good crosses into the box when Bale would drift inside. Assou-Ekotto operates more like a support wing back: tidy at the back, but getting forward quite often (though not as often as Kyle Walker, who is clearly used as an attacking wing back overlapping with Aaron Lennon). Benny also put in a mean free kick every so often as well.

Kyle Naughton hasn’t (yet) shown a real inclination to dictate play in the attacking third; his crossing is not the best, and he also doesn’t have the speed to beat defenders like Walker has on the right. Instead, Naughton has been the most effective when he gets the ball deep in midfield from a wide position to one of the more creative midfielders in more attacking positions. He is, to borrow a popular trope from the movie Swingers, "the guy behind the guy behind the guy." To illustrate, Naughton completed 68 of his 80 pass attempts for a very decent 85% completion rate on New Year's Day vs. Reading, and his most frequent pass recipient was to playmaker Moussa Dembélé: 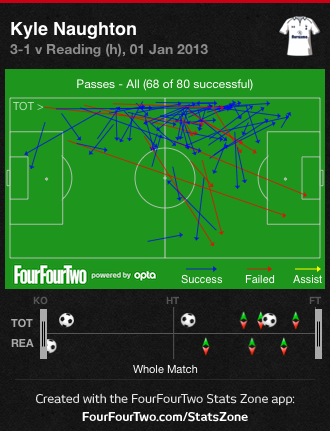 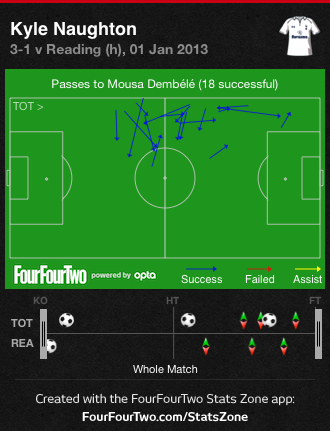 [All stats diagrams made with fourfourtwo.com's Stats Zone app]

While Dembélé’s position in the middle of the pitch and his role as playmaker makes him a natural recipient, Naughton was still quite effective in getting Dembélé the ball. It’s Naughton’s ability to provide the safe inlet pass that is the key to his success at left back, With Naughton at fullback, balls are worked into the box from the left, as opposed to having crosses fired in from the corner.

Defensively, Naughton has more than held his own, with just enough spee to negate the counter-attack. A strong tackler, Naughton is a steady defensive presence, putting in a tidy tackle or two when required.When Naughton is at his best, it is this ability to be a solid and steady presence at the wide midfield level that qualifies him to continue to get minutes at left back for Spurs. Defensively, he rarely puts a foot wrong, though he at times has difficulty holding onto the ball. 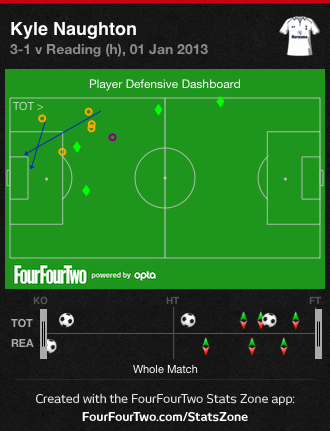 Naughton won’t score much. He also won’t take many players on directly. But based on the past few games where he’s put in significant minutes, it appears he also won’t make that many major mistakes (the goal conceded vs. Lazio in the Europa League an obvious exception).

Again, discounting Assou-Ekotto, Naughton's primary competitor is Danny Rose. He's having a decent spell on loan with Sunderland, but is hardly setting the world on fire. Rose was marginalized by Harry Redknapp and was understandably frustrated by his lack of playing time for Spurs, but recent comments by Villas-Boas about Rose’s future seem to indicate that he has "big plans" for him. Whether this means Villas-Boas, or whether it’s merely an attempt to put Rose in the shop window, remains to be seen.

But as successful as Rose's loan spell with the Black Cats has been (and it has), Naughton is playing better. According to Squawka.com, over the past five matches (Naughton played every minute of each match, while Rose has played an average of 82 minutes in each match), Naughton has a better pass accuracy (81% to 71%), a higher percentage of defensive duels won (78% to 53%), and a significantly higher cumulative performance score (225 to 30). While Rose has been the unquestioned starter since week 1 in his position for Sunderland and Naughton has only come into his position full time in the past six weeks, Naughton has been consistently more impressive statistically than Rose: making more passes, successfully completing more passes, and establishing a larger defensive presence. 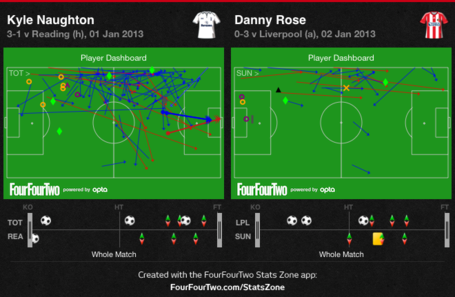 Long-term competition for the position may come from newly-signed Zeki Fryers, a product of Manchester United's youth academy and a highly rated youth player. For now Fryers will stay with Spurs' development league, but could in time gate-crash the first eleven. Also, in the event that Benny does move on in the summer, it would not be unheard of at all for Spurs to dip their toes in the transfer market, especially if they make the Champions League. But with two decent LB options in Naughton and Rose and a potential future star in Fryers, it would hardly appear as though left back would be a position of extreme need.

In the immediate short term, it will surprise no one when Assou-Ekotto returns to his place in the starting lineup for Tottenham. He will likely do so in Saturday's FA Cup match at Coventry. Benny will hopefully return to form and duplicate his excellent performances from last season. However, Tottenham need to carefully consider their options at this position for the future, and with continued solid performances this year and a good dose of competition from Danny Rose, as well as continued growth, the Sheffield Kyles may end up being Spurs’ starting options at fullback before too long. At 24 years of age, Kyle Naughton is certainly not a finished product, but based on what we’ve seen thus far, at present he very well appears to be Spurs' best left back option.