Because it's easier not to ramble when you make a list.

Rather than focus on one tactical point, I want to talk about five things that caught my eye in Saturday's match against Chelsea.

When the starting line-ups were made available on Saturday, many expressed surprise at Mourinho's inclusion of Ramires at right wing. Ramires has played in this position in the past, most notably under Rafael Benitez when Chelsea needed someone both to protect its right back in defense as well as swiftly counterattack when the team regained possession. In the first half, Ramires did neither, largely because his direct opponent, Kyle Naughton, doesn't get high up the pitch when played at left back. Because of Naughton's naturally conservative positioning, Ramires was not needed to support Ivanovic and had no space to break into on the counter-attack.

Why would Mourinho make such a puzzling decision, a decision that certainly played a part in Spurs' having the upper hand in the first half? We can't tell for sure but it's a good bet that he believed Villas-Boas's pre-match claim that Danny Rose would play. Rose, of course, did not play and was not even fit enough for a spot on the bench. It's not often that any manager, let alone a Spurs manager, wins the mind game battle against Mourinho, so this small victory is one worth savoring.

With Spurs leading by a goal at halftime, Mourinho shifted Ramires to central midfield and removed John Obi Mikel in favor of Juan Mata. While Mata nominally played at right wing, his positioning was far different than that of Ramires. While Ramires never strayed far from the right flank, Mata moved all over the pitch in search of the ball. 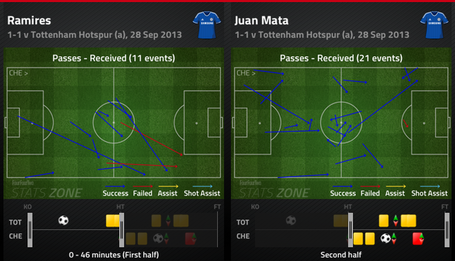 As in the same fixture last year, Spurs struggled with picking up Mata's movement. Ramires, meanwhile, was much more effective countering through the middle and eventually drew the free kick from which Chelsea scored.
Villas-Boas's substitutions -- Chadli for Townsend, Holtby for Sigurdsson, Defoe for Soldado -- had little effect on the game and it is somewhat surprising that Sandro, a natural holding player, was not brought on for Dembélé or Paulino, both of whom are box to box players. Danny Rose would have helped, too - with Mata moving all over the pitch, Chelsea's right flank was open at times but Naughton, being right footed, could not capitalize.

Both managers will look for any extra edge.

We tend to think of tactics in terms of the positioning and responsibilities of the players on the pitch, but managers will try almost anything to give their team an advantage. For instance, former Stoke manager Tony Pulis had towels sewn into the shirts of some players so that Stoke's favored long throw-in strategy was effective even in wet weather. In turn, when Stoke came to Manchester City last year, Man City coaches had groundsmen move the advertising boardings closer to the field to make it more difficult for Stoke's players to get a long run-up for their throw-ins.

At halftime on Saturday, Villas-Boas employed some unusual tactics of his own, as Ben Pearce detailed on twitter.

#thfc Freund just ran out of the dressing room to speak to the groundsmen and the pitch is now being watered.

Villas-Boas's likely motivation was to make it more difficult for Chelsea to play passes in behind Spurs' defense. With a wet, slick surface, those passes were more likely to skid off the pitch or into the arms of Hugo Lloris.

Mourinho, for his part, had some interesting advice for Fernando Torres.

Torres sent off. Mourinho just told him: "You should have stayed down" as he walked off the pitch.

Townsend is getting better.

As I noted last week, Andros Townsend came into the Chelsea match without having scored a single Premier League goal this season, despite averaging 5.5 shots per game. Townsend did not have a shot against Chelsea but he may have had his best game of the season. Using his slick dribbling skills, he was able to get into dangerous positions around the penalty box. Rather than shoot from marginal positions as he has done previously, he picked his head up and found teammates in even better areas.

In this clip, Townsend fakes a shot before laying off to Roberto Soldado, whose cross is inches away from finding Paulinho.

And in this next clip, Townsend picks up the ball at midfield (after Kyle Walker's ridiculous backheel) and finds Paulinho in the box.

What this illustrates -- aside from the fact that passing is typically a better option than 35-yard shots -- is that Spurs fans should probably be more careful when they say Villas-Boas must drop X or Y player. We fans see what occurs only during games; Villas-Boas, of course, oversees the squad during the week as well. He knows how well they train, how focused they are, and whether they are improving upon their weaknesses or making the same old mistakes. Townsend's improvement is the result of hard work by the player and the training staff alike.

The most Dembélé game ever.

Mousa Dembélé is one of the most unique players in the Premier League. As Michael Cox has pointed out, it's hard to think of another player who combines direct dribbling with prolific tackling in the same way that Dembélé does. Dembélé's game on Saturday pretty much epitomizes what he is. He completed 48 out of 53 attempted passes, was successful in all four of his tackle attempts, and dribbled past Chelsea players eight times. 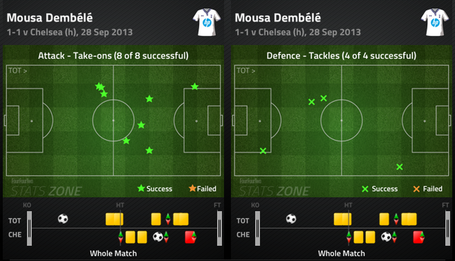 However, Dembélé did not have a single shot. The below clip is almost Moose in a nutshell.

In the above clip, after effortlessly blowing by two Chelsea players, Dembélé lays off to Sigurdsson and... is completely unprepared for his return pass. I sometimes think that if Moose had Paulinho's instinct for goal, he would be the best midfielder in the Premier League.

If you're looking for more analysis, Graham at WAGNH broke down Sigurdsson's goal and Windy did the same for John Terry's goal. Michael Cox, meanwhile, highlighted Villas-Boas's unwillingness to drop his high defensive line when Spurs were leading by a goal.