The Lilywhites grew into the game after Andros Townsend's fortunate opening goal.

Prior to their first goal, Spurs dominated possession but were unable to garner a foothold in Aston Villa's half. As can be seen in the below passing chart, Spurs had trouble getting anything going in the center or right side of the attacking third and were consigned to working the left flank, rather fruitlessly.In the first half hour, Spurs had only one attempt at goal. 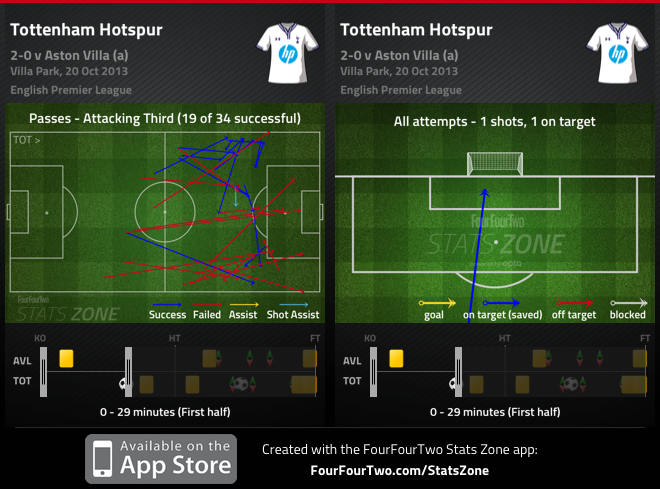 Aston Villa's strategy of squeezing space in the center was very effective in keeping Holtby and Andros Townsend quiet; both players had to drop very deep to get the ball, which left Roberto Soldado isolated. Gabby Agbonlahor in particular was very good about helping his fullback when Townsend received the ball. 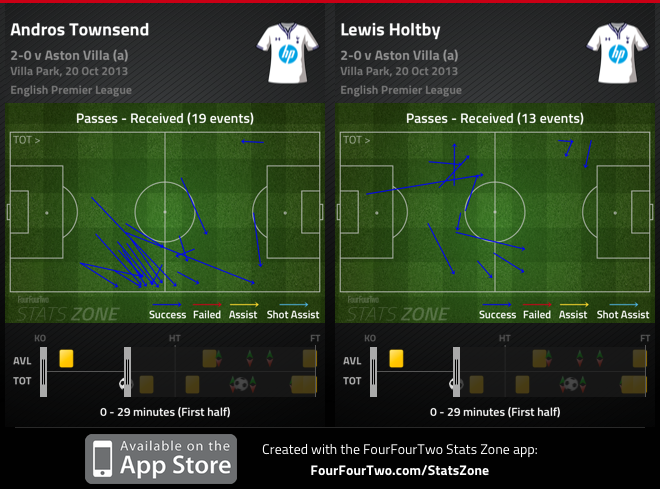 As a result of Villa's controlled pressing, Spurs most frequent pass combinations in the first half hour were between either center-back and center-back or center-back and full-back. Mousa Dembélé's dribbling ability would have helped Spurs get past the initial phase of Villa's press and into the attacking third. Villas-Boas' likely did not start him due to the minor ankle injury he picked up during the international break.

Townsend gets his goal

Townsend's goal was somewhat fortuitous and more than a little ironic. Prior to his goal, Townsend had taken the most shots in the Premier League without scoring, largely due to shooting from very poor locations.

In recent games he has cut out some of the bad shots but there was still something funny about seeing him score from an attempted cross.

Paulinho gets into the game after Spurs' first goal.

Lucky or not, the game changed after his goal as Spurs were able to get the ball into the attacking third. Paulinho had been restricted to his own half in the first half hour but started playing more of a box-to-box role after the goal was scored. Compare his heatmap prior to the goal.... 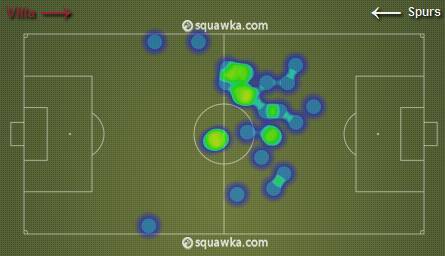 ... to his heatmap after the goal: 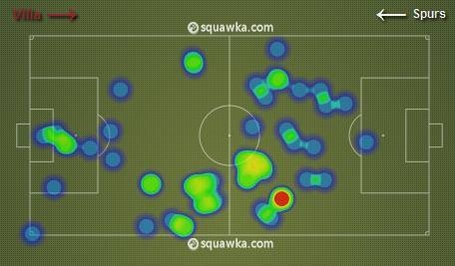 It's hard to say whether the change in Paulinho's positioning was due to Villas-Boas's tactics, Lambert's tactics, or Spurs being more composed on the ball but Spurs definitely enjoyed their best attacking stretch of the game after the first goal was scored, putting 4 shots on target from dangerous positions. Paulinho's positioning high up the pitch meant that he was able to provide the assist for Spurs' second goal. 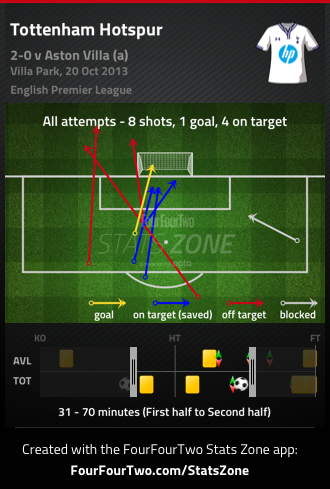 At some point early in the second half, Lambert moved Agbonlahor to striker (alongside Kozak and, later, Christian Benteke) and switched to a 4-3-1-2 formation, with Weimann moving to an attacking midfield position. The knock-on effect of this was that Villa's fullbacks, Antonio Luna and Leandro Bacuna, had a tremendous amount of responsibility -- they had to get forward and provide width in attack and while also defending their entire flanks against Spurs' wingers and fullbacks without the assistance of a winger.

Bacuna performed very well, at least initially. He got forward well in the second half and provided the cross for Villa's best chance of the game, a Benteke header from just outside the 6-yard box. Meanwhile, his direct opponent, Gylfi Sigurdsson was unable to take advantage of being isolated and did not create any chances.

Luna, however, simply could not deal with Townsend's pace and dribbling by himself. Townsend created three chances after half-time and very nearly connected with Paulinho for what would have been a certain goal. In general, he was much more involved after halftime. 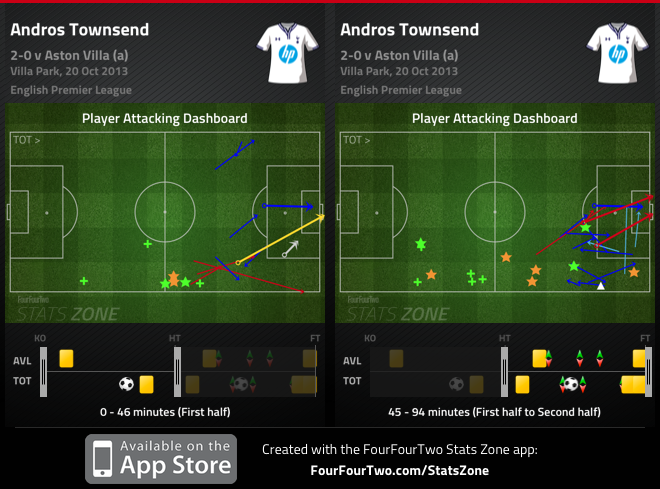 Villas-Boas responded to Lambert's changes by inserting Aaron Lennon for Sigurdsson, a highly effective defensive substitution. Lennon's pace meant that Bacuna had to be much more conservative with his positioning, for fear that Lennon would get in behind the Villa defense. That fear simply was not present when Sigurdsson was on the left wing. Bacuna created no chances after Lennon's introduction.

AVB later removed Holtby for Dembélé, which allowed Spurs to comfortably see out the game.

It's interesting to consider what would have happened had Spurs not scored the (somewhat lucky) first goal. Prior to that point, Spurs had real difficulty breaking down the Villa defense, a recurring problem this season, and it's possible they would have continued to struggle. AVB will surely be trying to solve this issue in training.

Even so, Spurs' ability to maintain the lead should not be overlooked. Aston Villa had just one shot in the box on target, a testament to Spurs' defensive fortitude. It was only a few weeks ago that Manchester City twice gave up one-goal leads and lost to Villa; Spurs should be applauded for not doing the same.

Some other scattered thoughts: