Tottenham Hotspur got another good performance from Andros Townsend against Hull City and while the wide man didn't score, he was the best player on the pitch by miles.

It is getting to the point where we are running out of superlatives to describe Tottenham Hotspur winger Andros Townsend. The English attacker struggled in the early going against the pressure put on him by Hull City Tiger defense, but he eventually adapted and worked hard to create some chances for Spurs.

Townsend was on the ball quite a bit for Spurs and it was clear that the team view him as their catalyst in the attack. Andros had 77 touches, most of which can in the attacking half. Townsend completed only 79% of his passes and he had only one accurate cross, but he did manage two key passes and 9 successful dribbles against a tightly packed Hull defense.

If there's one critique that I (and probably a few others) have of Townsend it's that his shooting still isn't very good. Take a look at his shots from this match (via FourFourTwo's StatZone. 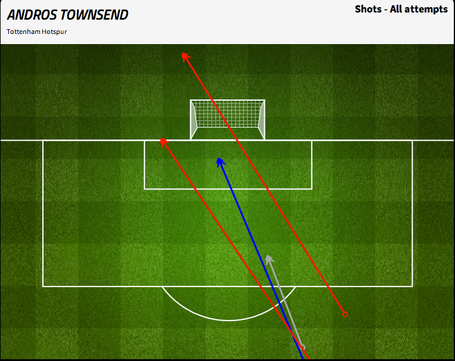 Those shots are from way outside the box. So far outside the box, that the StatZone page doesn't even have a point on their chart for where they begin. That's a little wasteful. Now, I'm willing to forgive him for that selection in this match because it's not like we were creating many opportunities anywhere else, so having a pop from distance, especially early on wasn't hurting anything, but Andros is going to have to either start scoring some of these or get a bit closer to goal if he want to continually do this. His shots don't seem to have the same level of technique (i.e. dip, wobble, curve, whatever) that Gareth Bale's used to and as a result they're not beating the keeper.

That criticism aside, Townsend was consistently dangerous thanks to his pace and skill. When Hull started pressuring him, he started picking the ball up deeper. You can tell that Andros wants to get on the ball and influence the game and that's just the thing that Spurs needed in this game. The only thing missing from Andros in this match was end product, whether that was a goal, an assist, or an important foul that lead to a free kick goal.