Tactics Tuesday: Big Sam's 4-6-0 gets the better of AVB and Spurs

Share All sharing options for: Tactics Tuesday: Big Sam's 4-6-0 gets the better of AVB and Spurs

Andre Villas-Boas started Jermain Defoe in place of Roberto Soldado in a Spurs side otherwise unchanged from the side that started against Chelsea last week.

Sam Allardyce played an unconventional 4-6-0 formation that featured Ravel Morrison and Mohamed Diamé as the most attacking midfielders.

Most football fans regard Sam Allardyce as something of an anachronism. He loves burly center forwards and wide players who put crosses in, despite the evidence that crossing may not be the most successful tactic. On Sunday, Allardyce surprised almost everyone by playing a 4-6-0 formation without any natural strikers.

While West Ham's 4-6-0 did not resemble the tiki-taka possession style of Barcelona under Pep Guardiola, it absolutely confounded Villas-Boas and the Spurs team alike. The extra bodies in midfield meant numerical superiority in the middle of the park for West Ham and three major problems for Spurs.

First, Spurs had trouble initiating their attack. Diamé and Morrison showed great discipline in taking turns to pressure Spurs' central defenders while the other cut off obvious forward passing angles. Vertonghen and Dawson did not find it easy to pass the ball to Dembélé or Paulinho or either fullback. The two most frequent passing combinations were actually between the two Spurs centerbacks. 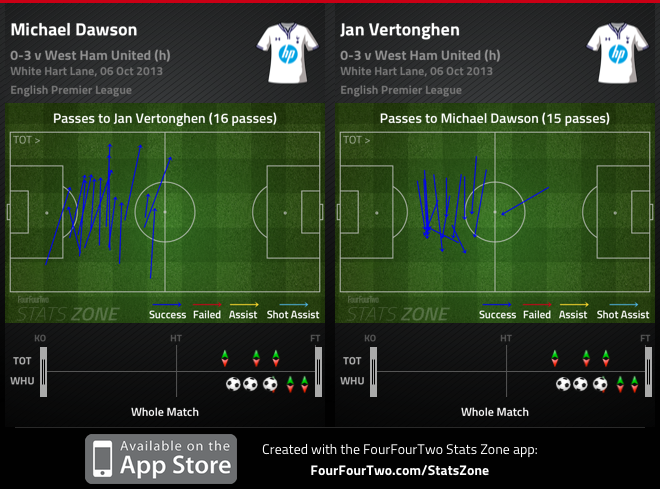 Second, Spurs found the middle of the pitch extremely congested when they were able to play the ball into midfield. Once a pass found a Spurs midfielder, Diamé and Morrison dropped deep to help out their defense. This was very effective in stifling Paulinho and Dembélé, both of whom are better known for their direct dribbling than their incisive passing. Dembélé completed only one successful dribble in the opposition half after completing five the week before against Chelsea. 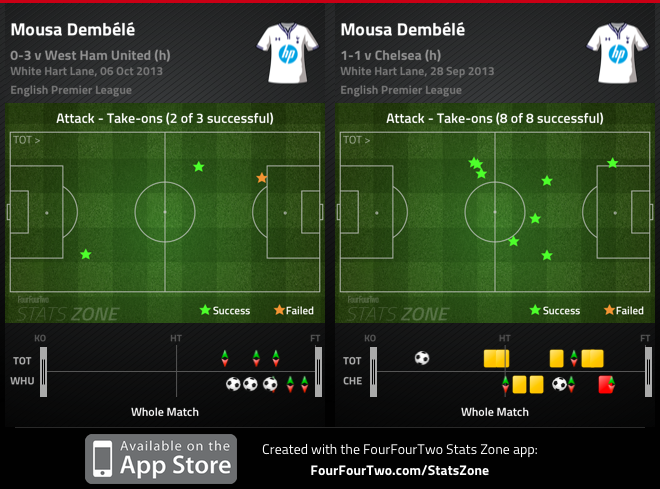 Another effect of the midfield congestion was the amount of ball recoveries by each team. West Ham's head of performance analysis recently noted that Allardyce places great importance on this particular statistic.

Every time we play the ball forward to the front, we're looking at whether we win the flick-on, we win the ball that gets headed down (the second ball) because it's a great opportunity to gain possession in the opposition's half so we're constantly looking at how well we do that.

On Sunday, West Ham's extra midfielders allowed them to recover 18 more second balls than Spurs did, an amazing number considering that Spurs have come off second best by this metric just once this season, and that was by only two ball recoveries. 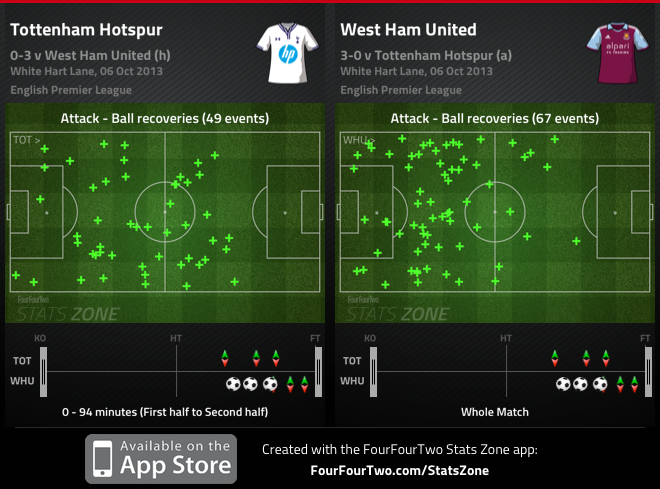 Finally, West Ham's midfield superiority made it difficult for Spurs to apply pressure. Spurs' midfielders often seemed uncertain about when and whom to press, such were the numbers West Ham had in their own half. The Hammers were able to work the ball around Spurs pressure surprisingly easily, given their lack of passing pedigree. When Spurs were successful in applying pressure, West Ham's defenders and midfielders were happy to play the ball long, comfortable in the knowledge that Spurs would have trouble initiating their attack and breaking through the Hammers' backline.

Villas-Boas unable to change the game

Villas-Boas brought on Erik Lamela, Roberto Soldado, and Lewis Holtby but none of the substitutes had a measurable impact on the game.

In hindsight, Villas-Boas may have found greater success had he focused on Spurs' attack on the wings. West Ham could play very narrow in part because Spurs did not offer any width. As we've seen in past games, Spurs' left flank of Sigurdsson and Naughton plays tends to compress towards the center of the pitch, largely because both players are right footed, which is almost certainly why Allardyce felt comfortable playing such a narrow formation.

What was surprising in this game was the degree to which the same issue manifested on the right flank. Kyle Walker was clearly not match fit -- it was reported that he picked up an injury or illness prior to the game -- and could not support Townsend down the right. He was much less active in the final third than he usually is. 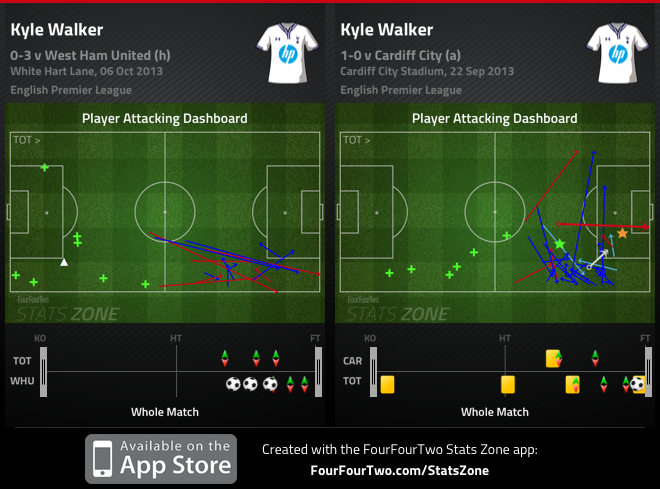 This meant that Townsend had to play a dual role: inside forward and right winger. He was about the only creative spark from Spurs and unsurprisingly did his best work when crossing from the wide areas.

Villas-Boas may have been better off removing Walker for Vlad Chiriches, with Naughton going to right back and Vertonghen to leftback. Though Chiriches is still adjusting to English football, such a change would give Spurs much more better width on both flanks, thereby giving the central midfield trio more room to operate in.

Danny Rose's injury means that Spurs are naturally a narrow side in attack. Because of this (and the lack of a target center forward), it makes a lot of sense to flood the midfield and force Spurs to play wide. Allardyce was somewhat fortunate to be aided by Kyle Walker's pre-game injury, but even so he played his hand about as well as he could have and deserves credit for setting up his team to stifle Spurs and counter efficiently.

For Villas-Boas, the international break comes at an ideal time. He can sit back, take stock of what went wrong, and come up with a plan to fix it. With any luck, we could see the return of Aaron Lennon, Étienne Capoue, and Emmanuel Adebayor by the end of the break. All three could have played a part in this game -- Lennon could have stretched play (allowing Townsend to do the same on the left), Capoue could have helped win second balls, and Adebayor would provide a physical target in the center. Oh, and it would be great if Danny Rose could get healthy soon, too.

Finally, it's important not to blow this game out of proportion. It was a bad loss, yes, but it counts just the same as Manchester City's loss to Aston Villa and Manchester United's loss to West Bromwich Albion last week. Spurs are 3 points out of first place and have over 30 Premier League games to play before the end of the season. I'm confident we'll only see better performances from here on out.