This image is just outrageously depressing.

Share All sharing options for: Roberto Soldado spent more time taking kickoffs than getting into the City box

There are lots of things about Sunday's loss to Manchester City that make Spurs fans upset. We'll learn a lot of things from statistical analysis and articles by really smart people, but no one needs those things to understand that Tottenham were really bad, and that there are a lot of ways to illustrate exactly how bad they are.

I present one of those ways: Roberto Soldado's heat map from the game. 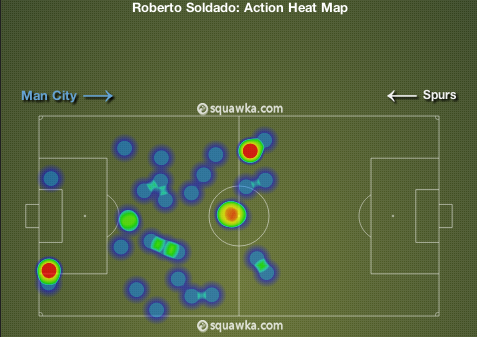 If this isn't the saddest heat map we've ever seen from a striker, I'd like to know what beats it out.

This is a problem that has to do just as much as ball movement as it does Soldado's off the ball movement, but Soldado's current scoring record for open play tops my list of the biggest problems Spurs have at the moment. His movement isn't good and the midfield wouldn't be getting him the ball in dangerous spots even if it was. The right hand isn't talking to the left, and that's why we have a center forward who didn't get a single touch centrally in the penalty area in an entire game.