Tactics can't explain Manchester City's opening goal, but they can account for much of the subsequent damage.

When Hugo Lloris's poor clearance and Jesus Navas's amazing finish combined to put Spurs behind before the majority of Spurs players had even touched the ball, any plan Spurs might have had to sit back and soak up pressure before swiftly counterattacking went out the window. Of course, it's not clear that Spurs had such a plan in the first place - Villas-Boas remained wedded to the high line even while leading against Chelsea - but we'll never know, because City's early goal prompted Spurs to get bodies forward, with disastrous results.

Spurs eagerness to get back into the game nearly paid off in the 5th minute as Erik Lamela nearly scored at the back post from a Kyle Walker cross. Unfortunately, the team was too eager; Holtby and Paulinho often took up very high positions, which left Sandro and the centerbacks in exposed to City counterattacks.

This was apparent very early in the game, while there was still plenty of time for Spurs to find an equalizer. Here's how the pitch looks as City intercept near their own 18 yard-box in the 11th minute: 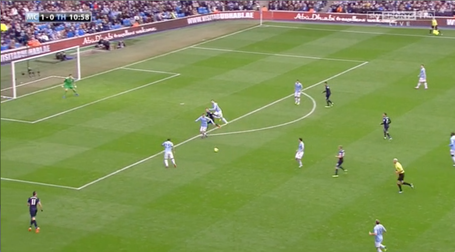 Lewis Holtby has attempted a through ball to Soldado, ignoring a wide open Lamela on the left. Paulinho and Lennon are also visible, while Kyle Walker and Jan Vertonghen are just off the screen. That leaves Sandro and the centerbacks to deal with Yaya Toure (on the right edge of the screen) and City's strikers. Here is how the play develops:

As can be seen in the GIF, there's no Spurs player within 15 yards of Negredo, who has dropped deep to receive the ball. Paulinho and Holtby's positioning have left Sandro with the decision to mark either Yaya Toure or the space in front of Spurs' centerbacks. Sandro chooses Toure, leaving Fernandinho with an easy pass to Negredo. Compounding matters, Walker and Vertonghen are high up the pitch, leaving Kaboul and Dawson alone with Aguero and Negredo.

This sort of all-out attack makes sense in the 88th minute, when your team is in search of an equalizer. But in the 11th minute, it's madness. In the 34th minute, City took advantage of Spurs' poor defensive positioning after a Lloris clearance. Here is what the pitch looks like as Lloris is about to receive a Kaboul back pass: 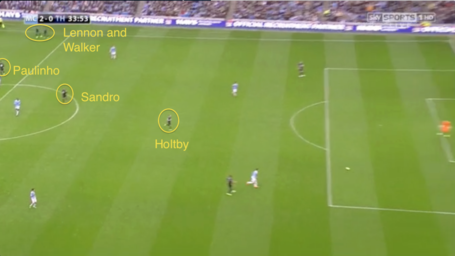 Lloris can either play a short ball to Holtby, who has dropped deep to receive it, or aim for the right side of the pitch, where Aaron Lennon and Kyle Walker are doubled up against Gael Clichy. Perhaps still reeling from his earlier miscue, Lloris aimlessly clears the ball into the center of the pitch.

Fernandinho, unchallenged by Sandro, Paulinho, or Soldado, heads the ball towards Samir Nasri, now isolated against Dawson with Kyle Walker still returning from his attacking position. Holtby is slow to read the situation and fails to get goal-side of Aguero as City ruthlessly convert.

Spurs had opportunities to even the score prior to City's second goal but failed to convert these opportunities into goals. Not for the first time this season, a lack of cohesion and individual quality in the final third let Spurs down.

Here, Erik Lamela does well to cut out a long ball to Zabaleta and break City's press with an intelligent pass to Paulinho. Paulinho lingers on the ball before attempting a pass to Holtby, a decision both high in risk and low in reward. It's also worth noting that City have four players back in defense at this time, as opposed to the two players Spurs left in defense in the first GIF.

And here, Holtby tries a through ball to Soldado, ignoring the unmarked Lamela on the left wing.

The only bright spots for Spurs were Emmanuel Adebayor and Mousa Dembélé. Adebayor looked lively and engaged. If he's physically and mentally fit, he would be a good candidate to start against Manchester United. Spurs haven't been able to get the ball to Soldado in the right spots; until Villas-Boas figures out how to do so, Adebayor offers more to the team with his movement and link-up play.

Dembélé, for his part, did typical Dembélé things: dribbling past players at will, spreading play to the flanks, recovering the ball in the middle of the pitch. He's not everyone's cup of tea but I'm big fan of his game. (I even wrote about how Spurs should sign him, three days before it happened).

Dembélé's huge frame and quick feet allow him to him to take players on without little risk of giving the ball away. Here, he evades Lescott, Fernandinho, and Demichelis before laying the ball off to Sigurdsson, who is fouled on the edge of the box.

And here he uses his frame to shield the ball from Javi Garcia before ghosting pass Demichelis and feeding the ball to Adebayor.

You might say that I'm cherry picking a couple of plays when the game was out of reach and you'd be right. But I really shouldn't have to post any GIFs to demonstrate Dembélé's effectiveness, given how Spurs played with and without him in the starting line-up last year. Dembélé started 25 Premier League games last season*, of which Spurs won 17, drew 5, and lost 3. That prorates to 82 points over the course of a 38 game season.

* Spurs matches only, not including the win against Southampton when he was substituted due to fitness issues 35 minutes into the game.

In the 13 games in which Dembélé did not start, Spurs won 4, drew 4, and lost 5. That prorates to less than 40 points over the course of a season. In other words, Spurs played like a title-challenging side with Dembélé in the starting line-up last year and like a relegation candidate without him. If you prefer advanced stats, well, he grades out very well there, too, per our own MCofA.

The case against Dembélé is that he releases the ball too slowly and doesn't get into the box enough. Regarding the first criticism, the GIF of Spurs on a counterattack above should provide some indication that Paulinho is not so different in this area. As for the latter criticism, Dembélé's reluctance to get forward actually makes him a good candidate for big matches, as he's less likely to leave the back line exposed than Paulinho. And while Paulinho does get into good scoring positions, his touch and shooting tend to desert him upon arrival.

Paulinho was excellent during the Confederations Cup and his form will likely improve, but for now Dembélé and one of Sandro or Capoue should be the preferred pairing in the Premier League, especially against the big teams.

The scoreline of this match was a disaster because (a) City are really good and (b) Spurs were incredibly naive to push so many players forward at just one goal down. This does not mean that Spurs are suddenly a terrible team, but it does mean that Villas-Boas has to make some adjustments, particularly in big games. Perhaps this game can solidify the lesson that the Spurs did not learn in the second half against Chelsea; that Spurs must respect the capabilities of the big teams, even if that means holding a few players back while in attack.

Here's to bouncing back against United on Sunday.