Tottenham Hotspur started brightly against Everton but failed to carve out any clear-cut chances.

Roberto Martinez selected Leon Osman ahead of Ross Barkley in an Everton side otherwise unchanged from the one that defeated Aston Villa 2-0 last Saturday.

Spurs have early success with pressing, tire in second half

Spurs were superb defensively in the first half, limiting Everton to two shots that did not come close to troubling Hugo Lloris. More than that, their energetic pressing stopped Everton from advancing the ball into attacking positions. Everton made a paltry 14 successful passes in the final third in the first half. 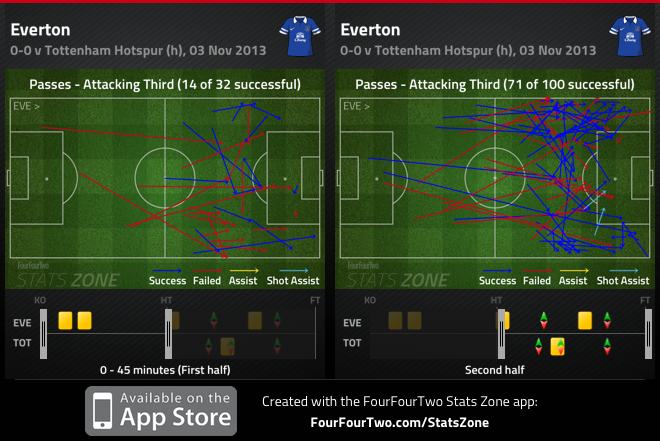 Every player performed his defensive duties excellently but I think it's worth highlighting the contributions of Lewis Holtby, Sandro, and Vlad Chiriches. Holtby's energy prevented Gareth Barry and James McCarthy from getting into any kind of passing rhythm and Sandro was immense in negating Romelu Lukaku, showing no fear in physical challenges despite a significant size disadvantage.

Chiriches, meanwhile, demonstrated why he was purchased to replace Steven Caulker this summer. Chiriches will never match Caulker's physical strength but his pace and technical ability make him more suited to Villas-Boas' preferred high line.

Watch Chiriches right after Lukaku releases the ball. He smoothly swivels and for an instant it looks like he's moving in fast-forward as he accelerates to catch up with Kevin Mirallas, one of the faster wingers in the Premier League. Even the most well-drilled high lines will concede counterattacks at some point. Recovery speed in a central defender is crucial in mitigating this problem. Chiriches has it; Caulker doesn't. That doesn't mean Chiriches is a better player, just that he's more suited to the system.

Spurs were unable to maintain their high pressing in the second half and Everton were much better despite never truly threatening Lloris. Many folks on my twitter feed pointed to Sandro's (injury-mandated) substitution as the cause for Everton's resurgence, but Everton had the upper hand even before Sandro went off. Fatigue was probably the more important factor -- it's simply very difficult to sustain a high level of pressing for an entire game against a team as good as Everton.

Lack of creativity in the final third

Spurs were unable to turn their defensive pressure into goals, a recurring theme this season. Unlike in some previous matches, there's no obvious positional issue that held Spurs back from creating good chances. Kyle Walker was healthy and active on the right flank. More importantly, Jan Vertonghen was excellent at left back, getting the better of Mirallas and Coleman throughout the match. So, it's not as though Spurs lacked for width.

What really held Spurs back was a lack of cohesion and individual quality in the final third. Too many times, the players made the wrong decision or made the right decision a split second too late. I've picked out a few instances to illustrate the point.

In the below GIF, Andros Townsend picks up the ball on the right wing after a Spurs corner. Everton are still resetting their defense, and Kyle Walker looks to make a run behind the defense. Townsend's through ball arrives too late and Coleman is able to block what would have been a dangerous cross.

Here, Paulinho does well to win the ball off McCarthy but he's not on the same wavelength as Lennon and a promising situation is wasted. With the benefit of hindsight, Lennon may have been better off sprinting in behind the defense and trying to cross to Paulinho or Soldado.

Below, Holtby's pressing results in an opportunity in the middle of the park. Holtby delays his pass a split second too long and Soldado is forced to check his run slightly, allowing Sylvain Distin to catch up with him.

Finally, Jan Vertonghen has an opportunity to find Paulinho's run in transition. He delays the pass and Everton are able to get in position to defend the opportunity.

The other problem with Spurs' attack, though harder to illustrate in GIFs, was a lack of combination play among the attacking players. When Everton were set in defense, Spurs players were stagnant and often looked isolated - there was little in the way of interchange or overloads. All of the GIFs above were opportunities that occurred when Everton's defense was not set. Spurs generated nothing otherwise.

With Spurs creating so few chances in recent Premier League games, Villas-Boas has to consider making some changes to the starting line-up. Christian Eriksen may be the most likely source of goals; as mentioned last week, Spurs have created far more chances with Eriksen in the No. 10 role than with Holtby in the same position.

Aaron Lennon, for his part, has looked uncomfortable on the left wing recently. He's prefers to check back onto his right foot rather than cross with his left and isn't one to cut inside and shoot, making him a poor fit for the position. The above GIF illustrates this well - he fails to do either thing and the opportunity is lost. Gylfi Sigurdsson, whom I've called for replacing in the past, is a better option simply because he is willing to get in shooting positions, even if he is not very involved in the play otherwise. This sacrifices some width, but if Vertonghen can continue to display the form he showed against Everton it won't be as much of an issue.

Finally, Andros Townsend has regressed in recent games. Earlier in the season, Townsend used his pace and dribbling to set up some dangerous opportunities for his teammates, often faking a shot before laying the ball off to Kyle Walker. Against Everton, Townsend repeatedly took ill-advised long shots or else crossed to Lennon at the back post. Neither of these plays are likely to result in any goals.

In an ideal world, Erik Lamela would only replace Townsend in the starting eleven because Lamela's play in cameos and cup games is such that Villas-Boas must start him in League games. Lamela, though decent against Hull in the Capital One Cup last week, has not demonstrated that kind of form in his limited minutes. Even so, Townsend's recent struggles have created an opportunity for Villas-Boas to give Lamela a more prominent role.

As MCofA pointed out yesterday, Villas-Boas needs to consider any potential change in the context of what it might mean for Spurs' defending. Spurs have created so little in the way of good chances recently that it is almost impossible to create fewer chances in upcoming games. I tend to agree with MCofA; it would be worth risking a bit of that defensive solidity for some more punch in the final third.