The stats behind the sacking: Spurs shot conversion, points and through balls

Spurs have been struggling this season at shot conversion, but that isn't the whole story behind the club's struggles recently. I rate Spurs as relatively fortunate in their conversion of goals into points. Further, the recent trends in goal prevention suggest serious underlying problems. Not unfixable, but real and concerning.

Share All sharing options for: The stats behind the sacking: Spurs shot conversion, points and through balls

Andre Villas-Boas, adorable bearded elf, is no longer the manager of Tottenham Hotspur Football Club. After one of the worst statistical performances by a top four club in several years—that's this weekend's disastrous home loss to Liverpool—he has been removed from his duties. I have emphasized this season that Spurs have been well below expectations in goal conversion based on shots and shots on target. Did poor conversion do in Andre Villas-Boas?

Based on shots on target, Spurs should have scored about 22 goals and allowed about 18. Obviously that's way better than our current goal difference of negative-5. Spurs have both allowed more goals than you'd expect based on shot location and shot type, and we've converted fewer.

As you can see, Spurs have actually allowed more SiBoT than we've taken ourselves. By shots rather than SoT we have a very small advantage in shots inside the box and shots from the Danger Zone. Tottenham's overall shot dominance so far this season is almost entirely a function of our doubling our opponents in shots and shots on target from outside the box. Overall, those are pretty blah numbers. We wouldn't expect negative goal difference, but we wouldn't expect a lot of points either.

Projections of the Past

I wouldn't make too much of the bottom of the table. Basically by the underlying stats, there is very little to distinguish the performances of the bottom seven clubs this season.

I do think this table makes clear that the unfortunate manager was Steve Clarke. His Albion were doing just fine by the underlying numbers, playing like a cromulent mid-table side, and just a little bit of bad fortune had dropped them toward the relegation zone. I expect the new manager to see a brilliant turn-around when the club starts getting results that match their underlying numbers.

Spurs on the other hand, that's not good. Tottenham have about three more points than they were projected to take this season. The underlying stats project Spurs as a better side than their negative goal difference implies, but they also suggest that Spurs have been fortunate to have their worst performances (vs. City, West Ham and Liverpool) concentrated in just a couple matches.

I've been talking mostly happy talk about Spurs this season. Now I'm sad. Am I just overreacting to one bad loss? Maybe. But I think that the stats are useful here. Just how much does one bad loss matter for our projections? It should matter 1/16th or so after 16 matches. And when you add that one bad loss into the numbers, Spurs drop from playing like reasonable but not favored contenders, to playing like upper-mid-table sides like Southampton and Swansea.

The other issue is that the Liverpool match continued a trend that began a month or two ago. Spurs began the season with ok but unspectacular attacking stats and full-on spectacular defensive numbers. The defense regressed to very good over the next several weeks, but then something went very wrong recently. We were beaten badly by West Ham and Manchester City. The back line was repeatedly breached by Fulham in a lucky victory, and then we couldn't even keep pathetic Sunderland from creating more chances than you'd expect. And then came Sunday's tire fire. This is expected goals allowed per match, a rolling average of five-week chunks. 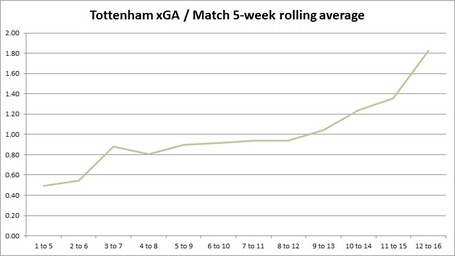 Certainly injuries are a part of the story here, but I don't think they're the entire story. While obviously Danny Rose's injury hurt, he went out in week four and we continued to defend effectively past that. Jan Vertonghen and Vlad Chiriches are missed, but they were fit for the club's bad defensive performances against West Ham, City and Fulham. So it isn't just a matter of injury. It's seemed like more and more clubs were figuring out they could play through-balls against us.

And indeed, Spurs have been allowing more and more shots off through-balls as the season went on. As I showed in the third shot matrix piece, linked above, shots off through-balls are basically the best kind of shot in my database. Allowing these shots means allowing goals. It looks like the league has developed a strategy to counter-act Villas-Boas' high line, and the club has not successfully adjusted to stop them. 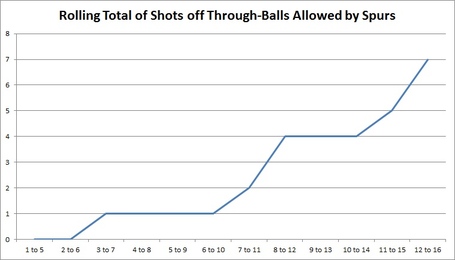 There are few shots off through-balls allowed, so we are looking at a very small sample here. But it fits with my observation that Spurs have seen their high line punctured by through-balls again and again in recent weeks after holding the line effectively in the early season. This could be bad fortune, I guess, but I think it's more likely that the league found a tactic which works against our defense and Villas-Boas did not adjust. Maybe he would have, and I expect whoever takes over for him will adjust, but the failure to make that adjustment in time is likely a significant cause of the manager's sacking.

I wonder whether AVB would have been sacked on 24 points and a +4 goal difference. Probably he'd have been in serious danger, especially if the trend in goals allowed and shots off through-balls allowed stayed in place. I don't think the club's failure to convert opportunities at the expected rate was a major factor in the sacking. The problems are deeper than just conversion rates.

I am not arguing that Spurs should have sacked their manager. I honestly have no clear opinion on this one way or the other. The choice to sack a manager must depend on how well-motivated the players are, the respect they and the club's staff have for the manager, and the quality of the tactics and strategies he has devised. We have partial information on the latter and really none on the former. So I think making confident judgments one way or the other on AVB's sacking, from the distance of fandom, is not prudent. The best thing to say is, I don't know.

What I want to emphasize is that Spurs have really been performing at a disappointing level overall and that this has gotten worse in the past several weeks. It has gotten worse in a very specific way, as the previously dominant defense has been split open time and again not just by top opponents but also by relegation candidates. Those are real concerns. I don't know if a new manager will fix them. But trying to fix these problems is essential if Spurs want to compete this season.