Tottenham legend and former Spurs and England manager Glenn Hoddle has come out and flatly said that he wants the Spurs job. But is he the right fit for Tottenham right now?

We've kind of ignored this potential Spurs appointment, but it's time to give him his due. Like him or not, Glenn Hoddle is in the conversation as the next manager of Tottenham Hotspur, so let's take a look at his qualifications.

Accomplishments: Hoddle is a former manager of Swindon Town, Chelsea (as player/manager), Tottenham Hotspur, Southampton, Wolverhampton Wanderers, and most notably, England, where he guided the Three Lions to the knock-out stages of the 1998 World Cup, losing to Argentina on penalties. As a Spurs manager, he took the club to the 2001 League Cup final where they lost to Blackburn), but in his time in charge at White Hart Lane he never guided them to a final position above ninth and he was sacked after just over two years in charge.

Before he was manager: Hoddle came out of the Tottenham youth setup and had a 12-year professional career with Spurs, notching 377 appearances and scoring 88 goals as a midfielder, and rightfully cementing his place as one of the all-time Spurs greats. He's a former PFA Young Player of the Year, was on the 1981 FA Cup winning side, and the 1984 UEFA Cup winning side. In an ironic move, he was then brought to AS Monaco in 1987 by Arsène Wenger. He finished his playing career with stops at Swindon Town and Chelsea. Hoddle also had an excellent national team career, notching 53 caps as a player and scoring eight goals. Hoddle currently runs the Glenn Hoddle Academy, a highly-respected program that seeks to develop former EPL and Football League young players who have been released by their clubs and get them back with new teams.

Tactical analysis: Hoddle is lauded as having a brilliant footballing mind, but it hasn't always translated to excellence on the pitch for his teams. All of his prior club coaching positions have ended closer to mediocrity than excellence, although he does have the third highest winning percentage of all time with the England national team. Tactically his past squads have tended to play in an orthodox 4-4-2 formations, though it's said he prefers a 3-5-2. Hoddle's recent graphic on Sky Sports where he put his "preferred Spurs lineup" was a very weird formation with three at the back, Andros Townsend as a #10, and a front pairing of Soldado and Defoe. Whatever -- it's highly probable that, should the club hire Hoddle, we'd see a two-striker formation of some sort going forward. 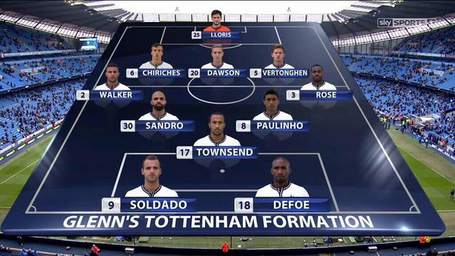 What else can he bring to the table? For starters, he desperately wants the job. Hoddle has all but pleaded to the Tottenham board to come and get him. Hiring Hoddle brings a sense of connection to long-time Spurs fans who still remember him fondly. Other people affiliated with the club like Ossie Ardiles, Gary Lineker, and Lord Alan Sugar have all backed Hoddle to get the Spurs job. He'd probably also be a big hit with the younger Spurs players like Andros Townsend and Erik Lamela, as Hoddle would work hard to develop their talents. And, you know, Tottenham legend. Also, there won't be any confused new fans asking why this site's daily early morning post is called what it's called.

What's the catch? Hoddle is clearly beloved at the club both by fans and the board, and nothing should ever take that away from him. He has a very solid footballing mind, has a proven record of developing youth players, and has the English media on his side. Regardless, this would be a pretty bizarre appointment going forward. While his Spurs teams were pretty crap while he was manager, there's nothing in his managerial career that indicates that he would do a better job with Spurs this time than he did last time around, and there are clearly better tactical minds out there that are available right now. He's also been out of football for over a decade, and has a reputation from his previous stints for being, well, a little bit nuts. Former players have commented about his odd management tactics, and Gary Neville wrote about his England career under Hoddle being "a waste of time" and detailed strange tactics like appointing a faith healer as part of the England medical squad and telling the staff to "walk around the pitch anti-clockwise during the game against Argentina to create positive energy."

Appointing Hoddle would placate edgy fans initially -- who doesn't like a club legend returning to manage in glory? -- but this doesn't seem like the kind of signing that would move Tottenham into the next phase. Hiring Glenn Hoddle would more likely be Tottenham Hotspur's "Kenny Dalglish moment" and possibly could set the club back years. It would be considered either a genius move, or an utter disaster, and there's not much here to indicate genius.