Fear means something you're uncomfortable with is happening. That's not always a bad thing, but occasionally, fears are justified.

Share All sharing options for: Tim Sherwood terrifies me

Tottenham Hotspur's victory over Southampton on Sunday was one of the best moments of this season for the club. They played an entertaining, direct and attacking brand of football that was the direct opposite of everything fans disliked about Andre Villas-Boas' style. Everyone appeared to be enjoying their football and the end result -- a win away to Southampton -- was an excellent one.

I tried to just be excited and feel nothing but joy that Spurs pulled off a brilliant away win playing incredibly fun football, but I failed in that endeavor. I had negative thoughts about what was going on pop up during the game that I tried to forget when the result turned out positive, but I couldn't do it.

The reason I couldn't do it is because Tim Sherwood terrifies me.

A ghost story of Tottenham

I'm not terrified because of his non-existent experience as a top-flight manager. Lots of managers are very good in their first big jobs. The most contemporary example of a manager who spent time at a club as a coach or reserve manager before taking over the top job without managing elsewhere is that of Pep Guardiola, the Barcelona legend who cleaned out the bad apples that Frank Rijkaard allowed to think they were bigger than the club before guiding them to a spectacular treble.

Sherwood's backers ask why he can't be our Guardiola. Based on his playing experience, coaching experience and how highly regarded he is by both his current bosses and his peers in the coaching profession, there's no reason he can't be. He was a limited player who got to the highest level of the game because of his intelligence and work ethic, the latter of which he's trying to instill in his players. He's been a youth coach, a very successful Under-21 manager and a technical coordinator. He obviously knows a lot about football and developing footballers, and he's excelled at all of his previous positions by all accounts.

I'm not terrified because he introduced Nabil Bentaleb at St. Mary's. Bentaleb has been impressive in Under-21 matches for the last season and a half, and if anyone knows both how good he is now and how good he has the potential to be, it's Sherwood. Bentaleb played very well and didn't look out of place up against Morgan Schneiderlin, Steven Davis, Jack Cork and James Ward-Prowse. He looked like he belonged in a tough Premier League match against a good opponent.

I'm not terrified because Sherwood's preferred formation is 4-4-2. The benefits of playing two strikers together were very obvious on Sunday. Most of the team's chances came as a direct result of having two players very high up the pitch at all times, and one of the goals came on a combination between the two strikers.

Manchester City have proven that 4-4-2 still has a place in modern football, provided that a team has the right personnel to make up for a numerical disadvantage in the center of midfield against most sides. While Chelsea usually attack in a shape that looks like 4-2-3-1, they've spent a lot of time this season defending in a 4-4-2 shape, with Oscar or Juan Mata sitting alongside a striker while the midfield and defense drop into two banks of four well behind the halfway line. Arsene Wenger, Alex Ferguson and Brendan Rodgers have all been willing to go to a 4-4-2 formation when they feel the game situation, the personnel available to them and the personnel that their opponent is using makes it a good option.

While the 4-4-2 formation is very rarely used as a starting formation by most modern managers because of the obvious problems with having a two-on-three disadvantage in the center of the pitch, it is not a completely outdated and archaic formation, contrary to the beliefs of its most vocal detractors. There is a time and a place for just about everything in football, including a very wide and open 4-4-2 formation. 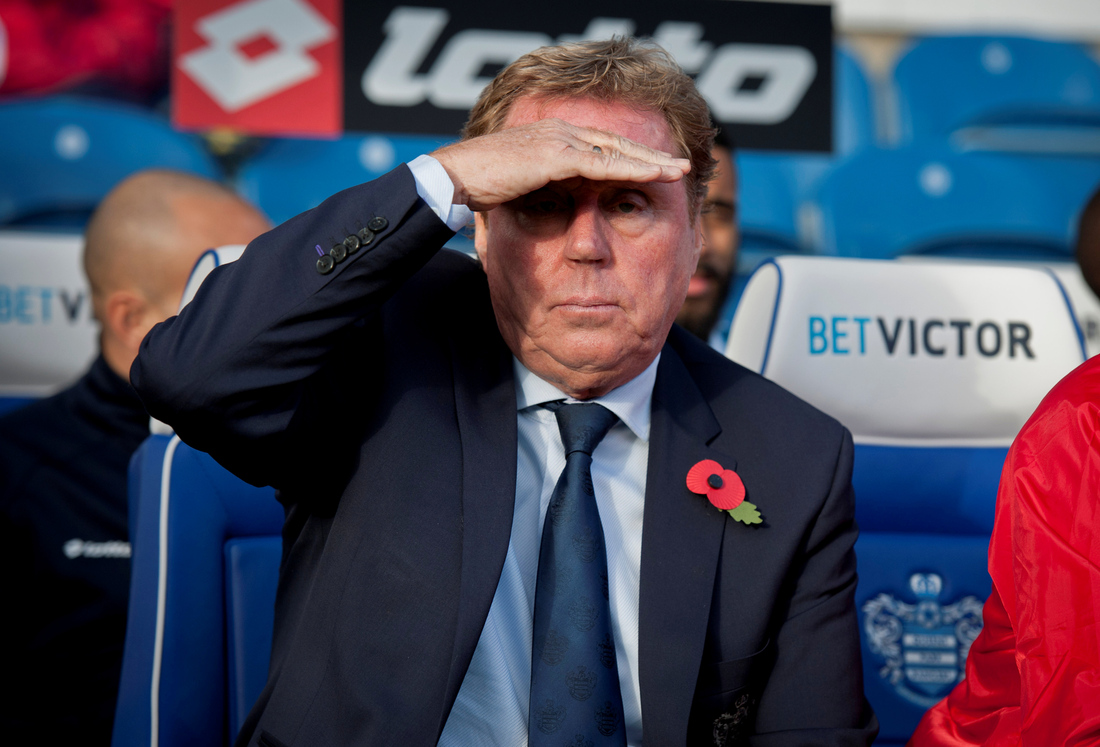 I'm not terrified because he seems to be a hell of a lot more like Harry Redknapp than Villas-Boas. I don't have a problem with setting a basic 4-4-2 or 4-4-1-1 formation with minimal tactical instruction, 'tellin' the lads to 'ave a go and express themselves.' As a base philosophy, there's nothing particularly wrong with that. The goals that were scored by Spurs on Sunday might not have been scored if they were more concerned with moving the ball in a certain way or keeping possession than they were with just trying things. There's some logic in that.

The problem with Redknapp was that he didn't have a good enough sense of when to deviate from his usual formula. He had some major masterstrokes -- the AC Milan tie and the 3-2 comeback win against Arsenal are two examples that stick out -- but more often than not, in big games where the base system wasn't working, Harry wouldn't make the changes that needed to be made.

I'm terrified that Sherwood might have the same problem.

When the lineups were announced for the West Ham match, I was thrilled. I figured Sherwood was doing some PR work by picking the most un-AVB team he could possibly concoct and doing some experimentation in a home League Cup game against a weak opponent. He didn't have the personnel to play a defensive midfielder or a three-man center even if he wanted to. The team made sense given the situation.

The same probably can't be said for the Southampton team, though his decisions obviously helped the team produce a positive outcome. Individual performances by Spurs players who might have succeeded regardless of the formation and the players around him combined with injuries to key members of the squad and poor individual performances from Southampton had a lot to do with the result, but it would be unfair to say Sherwood's selections didn't also have a massive positive impact on the Tottenham result.

We're only two games into the Sherwood era, but I'm scared he's an ideologue. I'm scared he's just another Villas-Boas, but on the other end of the spectrum, dogmatically dedicated to his style of play and unable to adapt when it's obvious that the preferred system isn't the right one for a particular occasion. I'm scared he doesn't know why an Eriksen-Dembele or Eriksen-Bentaleb center of midfield seems insane to a lot of people.

Sherwood appears to be a much more extreme version of Redknapp

Thus far, Sherwood appears to be a much more extreme version of Redknapp. He has not come up against an opponent like Arsenal or Milan yet, so there's still a ton we don't know about him, but making three like-for-like subs in a tight away game in which his opposition twice exploited a weakness that was obvious from looking at the teamsheets was bold at best and absolutely batdung crazy at worst.

The good news is that not even the most unwaveringly aggressive manager, dedicated to playing a high-octane, constantly attack-minded brand of football could possibly invent a way to omit a healthy Sandro from this Tottenham Hotspur side. Sandro and a scarecrow is better defensively than any other two-man midfield combination Spurs could possibly field, so a combination of Sandro and one of Christian Eriksen, Lewis Holtby, Gylfi Sigurdsson, Nabil Bentaleb or *GASP* Tom Carroll should work out just fine.

If these last two games are simply Sherwood being willing to ship some goals and deciding to sacrifice some defensive quality and structure to get the team settled in a formation that will work very well when Sandro is healthy, so be it. I'd prefer to see Spurs go to something that looks more like Harry's 4-4-1-1 with a playmaker behind Emmanuel Adebayor or Roberto Soldado as a gradual transition to a world that features Sandro doing the job of two men in a 4-4-2, but if Sherwood feels that he needs to get a system drilled into everyone's head right away? I get it. It makes sense.

But if that's not the case? If he's going to be gung-ho about using a wide-open 4-4-2 regardless of available personnel, opponent or game situation for as long as he's the boss? If he's going to display something that looks like a lack of understanding of why the other team is scoring goals? That's scary. It doesn't bode well for Tottenham Hotspur's immediate future.

Right now, we don't know if that's the case. Sherwood deserves time to figure out how his preferred style of play and the players available to him mesh, and how best to set up his team to challenge for top four in the Premier League. I'm patient and I'm not going to jump down his throat if Spurs only manage to take a point or two from the next three matches against West Brom, Stoke and Manchester United.

If we see a Bentaleb-Eriksen center of midfield away to good sides in February, though? I'm going to have a problem with that.

I feel bad for thinking that's where Spurs are headed. It's a gut feeling, and one I want to go away, but thankfully one that's only based on a very small sample of evidence. I hope Sandro starts most of the rest of our games and Sherwood occasionally goes to some form of a three-man center when the situation calls for it. But given what we've seen from Sherwood so far, what he's said to the press about his system, the lack of good candidates available for the job and Sherwood's comments that he wants the job long term or not at all, I can't help but think the immediate future of the club is analogous to a dumpster fire.

Now go pummel West Brom and Stoke, get something at Old Trafford and prove me dead wrong.