Guess how many effs Tim Sherwood gives about you or your ideas about football?

If you'd seen the video and the line-ups that Villas-Boas played while he was manager of Tottenham Hotspur, you immediately got the joke: Villas-Boas is like the honey badger because he doesn't care about what people - managers, fans, bloggers - think of his line-ups. As a result, Villas Boas was willing to do things like sit Spurs' most expensive ever signing, a player with one of the best scoring records of anyone his age in any league (Erik Lamela) in favor of a home grown product whose greatest achievement prior to the season was a 12-game run with the relegated Queens Park Rangers (Andros Townsend).

Popular opinion says Sherwood shouldn't have done any of these things.  If the above is any evidence, it should be clear that Tim Sherwood doesn't give a f--- about popular opinion.

As mentioned, Sherwood set Spurs up with a 4-4-2 formation. With striker Dani Osvaldo injured, Mauricio Pochettino opted for a 4-2-3-1 formation. 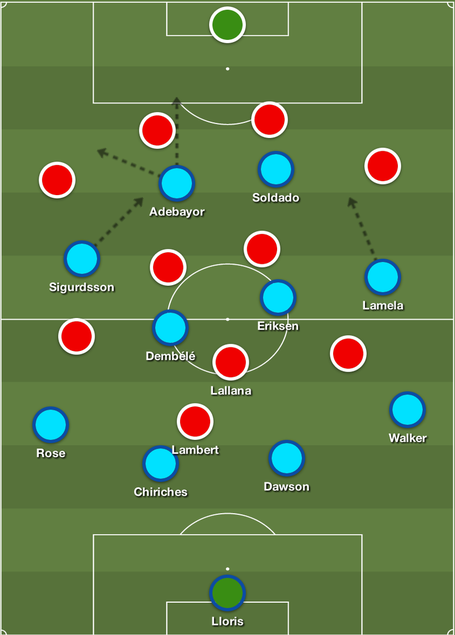 Sherwood's decision to play a 4-4-2 against Mauricio Pochettino's 4-2-3-1 formation was incredibly bold considering how Spurs had been shredded by Liverpool the week before. One of the defining features of that game was the space Spurs midfielders conceded to Liverpool's midfielders. That Sherwood was willing to play with a 4-4-2 without an established defensive midfielder is very telling.

And make no mistake, this was a genuine 4-4-2. Sometimes a manager will line-up with two strikers in attack only to have one striker drop into midfield when the team is defending, making the formation more of a 4-4-1-1 or a 4-2-3-1. Sherwood did not do that here and as a result Spurs were outnumbered in midfield. Consequently, Christian Eriksen and Mousa Dembele faced a tough choice: giving time and space to Southampton's defensive midfielders or giving space to Adam Lallana, Southampton's attacking midfielder. This picture below sums up the decision they had to make; Soldado and Adebayor are nowhere to be found. 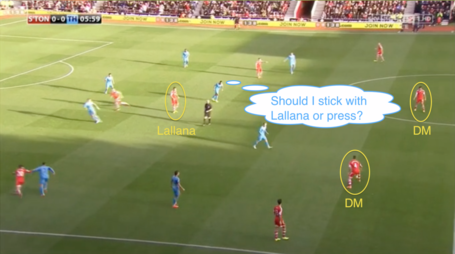 Lallana smartly positioned himself in pockets of space between the Spurs midfield and centerbacks and was Southampton's most dangerous attacking player. 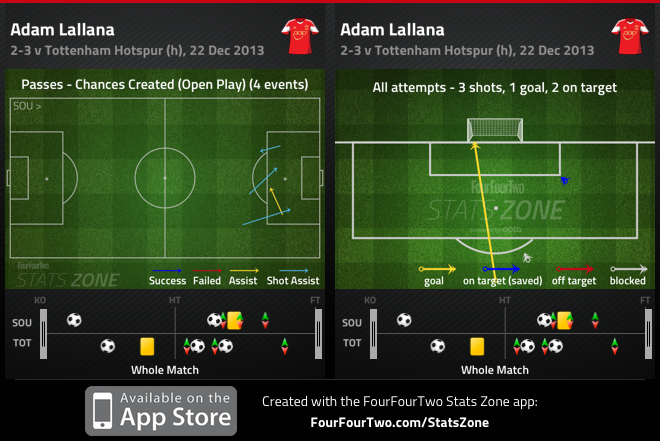 In addition to struggling with Lallana's positioning, Spurs had difficulty breaking Southampton's pressing, especially in the first half. Note how the position of Southampton's ball recoveries changed in the second half. 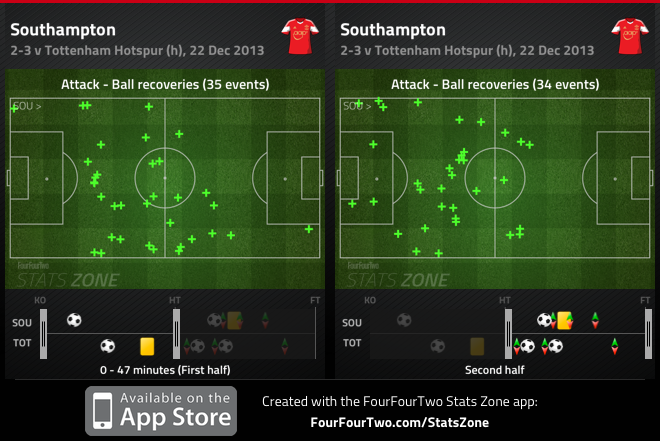 The flipside of not having an extra midfielder is that Soldado and Adebayor were 2-v-2 against Southampton's centerbacks, leading to some good opportunities for Spurs.  In the buildup to the first goal, for example, Adebayor received the ball behind Southampton's defensive midfielders before he fed the ball to Soldado on the wing.

As would be expected with a 4-4-2 formation, Spurs played a much more direct style than they had in previous weeks. Spurs attempted 62 long passes, their high for the season and over 50% more than they play in an average game. Passes into the channels occurred more frequently than in any game I can remember this season.

Spurs had some good and some not-so-good inidividual performances on Sunday. Here are thoughts on a few of them.

Emmanuel Adebayor. There might not be a player in the squad who can impact Spurs' attack more than a fit and motivated Adebayor. On Sunday, he did it all - ran the channels, finished his chances, and brought others into play.  Keeping him in this kind of form until the end of the season will be one of Sherwood's top priorities.

Christian Eriksen. Like many, I was shocked to see the young Dane in a deeper central midfield role. He kept things ticking over in the middle of the park with some one-touch passing and also chipped in with 5 tackles.

Nacer Chadli. Though he only played 30 minutes, this was probably his best game in a Spurs shirt. Finally showed some of the technical ability we have been waiting to see.  Linked well with Adebayor.

Mousa Dembele. Dembele struggled with Southampton's pressing game and was dispossessed 5 times in only 50 minutes on the pitch, which is surprising for a player who's typically so tidy in possession.  Seemed off the pace of the game in general and may be suffering from fatigue, having played more games than any other midfielder in the squad.

Erik Lamela. Had a few nice passes and ideas but was largely ineffective and was eclipsed by Chadli.

Nabil Bentaleb. I was slightly terrified when Sherwood subbed Bentaleb in for Dembele, but he comported himself quite nicely. 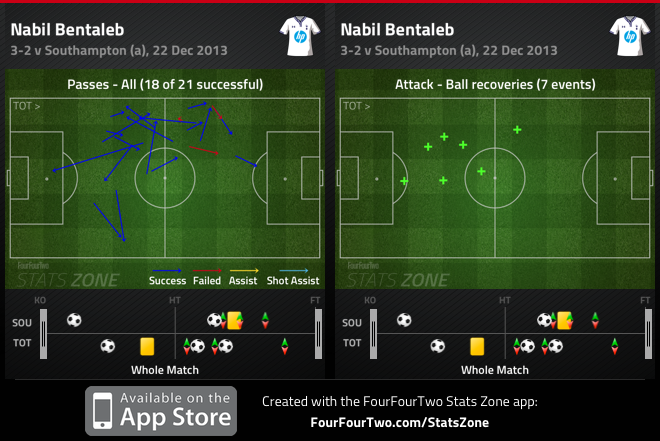 His passing was very tidy and, for the most part, he positioned himself well to help break up Southampton attacks. He also played an instrumental part in Spurs' second goal. First, he showed good strength and composure to win the ball back and play it to Gylfi Sigurdsson.

Then, he showed a good turn of pace to get by Jack Cork and feed Emmanuel Adebayor.

Now that Sherwood has been appointed full time, it will be interesting to see whether he sticks with the same gung-ho 4-4-2 strategy. While Spurs won on Sunday, the game probably could have gone either way. Spurs also lost to a not very good West Ham side in midweek, indicating more fragility with the system.  On the other hand, Spurs scored 3 goals in open play, more than they had in any Premier League game this season.

My own hope is that Sherwood used the 4-4-2 as a way to change the squad's mindset - to encourage players to be less cautious and take risks to score goals - and that he'll eventually revert to tactics that promote more solidity.  Of course, if there's one thing we've learned about Tim Sherwood, it's that he doesn't care what I, or anyone else, thinks.