Stats and Projections for Tottenham Hotspur vs West Bromwich Albion

I project we'll win. But I also think West Brom have been unlucky recently and are notably better than their current league position.

Share All sharing options for: Stats and Projections for Tottenham Hotspur vs West Bromwich Albion

When Andre Villas-Boas was sacked by Tottenham Hotspur, a number of people on the internet remarked on Spurs' terrible goal conversion stats and asked whether AVB had been done in by bad luck. I've argued here that it wasn't bad luck that did in AVB. While Tottenham have unsustainably bad goal conversion numbers, we've also taken quite a few more points from our schedule than you'd expect for a club with a negative goal difference. So if you replayed the season based on the underlying stats, you'd expect Spurs to have scored quite a few more goals and allowed a couple fewer, but you wouldn't expect Spurs to have a better won-lost record.

The manager whose sacking seems clearly unjustified, rather, is Steve Clarke. His West Bromwich Albion seemed to be plugging along just fine to another season of safety. They were hard done by the referee and merely drew with Chelsea in a match they had won, and then it all slowly collapsed. A home draw to Aston Villa, an away loss to Newcastle, and close-fought away loss to Manchester City. None of those were terrible results, but it was enough of a narrative that when the Baggies lost home to Norwich and away to Cardiff, Clarke's job was at risk.

And by the numbers, those two last losses were terribly unlucky. The Norwich City match was WBA's version of our Newcastle disaster, a game we dominated in terms of chance creation but could not convert. West Brom had eight SiBoT to Norwich's two and 10 shots from the danger zone to Norwich's one. Against Cardiff City the difference wasn't quite as stark, but each side had one SiBoT and West Brom took six shots from inside the box to Cardiff's one. To take no points at all from those two matches looks like a terrible stroke of misfortune.

To put the story in graphical form this is a comparison of West Brom's actual goal difference and their expected goal difference. You can see the lines diverge wildly with the Norwich City match, and they've continued to separate in the weeks since. 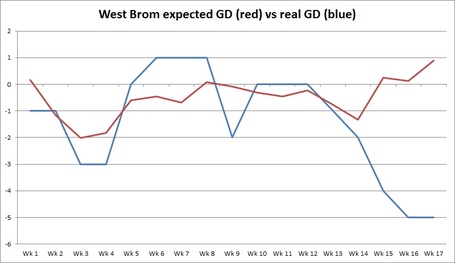 This is a club whose underlying stats project them to a roughly even goal difference. They look like a solidly mid-table side on a mostly random cold streak. Spurs should be good enough to beat a mid-table opponent at home, but this match looks tougher than WBA's league position would suggest.

Obviously my numbers can't account for the myriad changes around White Hart Lane. A new manager, new tactics, the normal spate of injuries, plus a whole bunch of players released from AVB's doghouse into the starting lineup. I don't think any of us can say with confidence that Spurs are definitely better or worse than their stats so far, but I think the error bars are very large. Spurs are more likely to be much worse or much better than their stats, compared to a normal club. I think we know roughly what Manchester City are, what Southampton are, what Aston Villa are. You could tell me any number of stories about what this Spurs season will become, from the wacky to the mundane, and I'd have no real clue which was the real one. I hope it's a happy story, though. I'm tired of sad ones.