I take a look at the typical aging curve of a top-level football players. I find that peak age is roughly 24-28, with 25-26 being the most likely prime for an attacking player. The data also helps to show the typical age progression by position, as shots taken per minute played decline starting at the end of the twenties.

Share All sharing options for: The Football Aging Curve

I was playing around with some numbers before Fulham's match with Aston Villa. Fulham, previous to firing Martin Jol, were absolutely horrible this season, worse that Reading last year, worse than any other club in the last couple years. Their problems were primarily in defense, where they were allowing high quality chances at a hilarious rate. I hypothesized that the problem here might be inherent to Fulham's roster. Fulham has the older average age of outfield players of any club in the Premier League, weighted by playing time. Aston Villa is the youngest.

Of course, what then took place was a dominant Fulham victory. So my point here is that we shouldn't read too much into team age numbers, it matters much more how good the actual players are. But it got me thinking about what exactly the normal aging curve is for football players at the top level. (I was also intrigued by this question after looking at the Tottenham Hotspur roster, which is also one of the youngest in the league.)

How do you measure an aging curve? In baseball, we have good enough value stats like WAR, so you can sum up the WAR of all players at all ages and see the curve. Obviously football is years away from anything like WAR, even for strikers, let alone for holding midfielders. But I think we can do the study using much simpler data and still see the curve clearly. Back in his 1987 Baseball Abstract, Bill James estimated the aging curve with significant accuracy using just playing time and a few basic stats. We can do the same thing.

I have player age data for all outfield players going back to the 2011-2012 season. (That data entry took a little bit of time. Just mentioning.) I'm looking at three measures to estimate the player aging curve. First is just raw time played by players at each age. Second is total shots at each age. The idea here is that the player aging curve is probably somewhat different for more advanced positions than for deeper positions. You expect to see younger players in more important positions in the attack compared to older players. To test this more precisely, I also looked at shots per minute played, to see if players typically shoot less as they age. So let's look at the results. 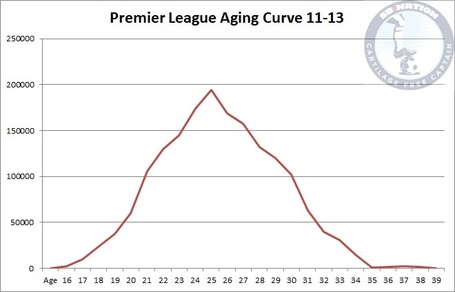 The peak here at age 26 is probably a little more extreme than it should be if I had more data, but you get a pretty good idea of peak age here. There's a very steep improvement curve through the early 20s up to age 26, then a slightly less steep slope down from 26 to 30, and the cliff hits hard after that.

So if you have useful players at age 22 or 24, it's probably a good bet that they have some improvement left to add to their games. If you're counting on a 29-year-old, you should be a little bit worried. Now, obviously this is all very general, and individual players will peak at different ages based on factors that can't be predicted. But I think it's a good heuristic and starting point.

Now, everyone knows that you can survive with a 33-year-old center back, but you should be very concerned about a 33-year-old winger who isn't Ryan Giggs. I don't have player position data, and anyway position is a very rough thing, changing match to match and system to system. "Midfielder" is a bucket than includes massively different players. So to take a look more objectively, I'm mapping total shots taken by player age. The graph here is shifted slightly to the left, not a ton, but a noticeable amount. The players at the focal point of the attack tend to be a little younger. 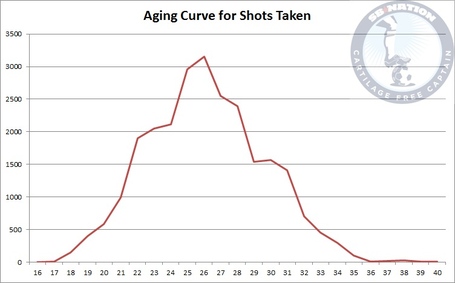 The curve is pretty similar, but now the peak is shared between ages 25-26, and the cliff hits after age 28 rather than age 30. So for attacking players, as you'd expect, the typical peak comes earlier in a career.

I don't want to draw any one-to-one conclusions from these numbers because every player is different and every aging curve is different. But not for nothing. Roberto Soldado is 28 years old, and this is around the time when you start to get worried about the cliff. I don't think we should conclude from this data, well, anything in relation to an individual player. That's the ecological fallacy. And my guess is that strikers will have a more gentle aging curve than attacking midfielders since they have to do less running on average.

But I can't help it, a little.

So, this means that player aging appears in the data in two ways. First, players get good enough just to earn regular playing time in the Premier League, and then that ability fades and they get dropped. Second, players at a slightly earlier average age earn more attacking responsibilities, and as they age they are moved to deeper positions. You can see the latter aging curve in this graph of shots taken per minute played. This reflects changing tactical responsibilities relative to player age. 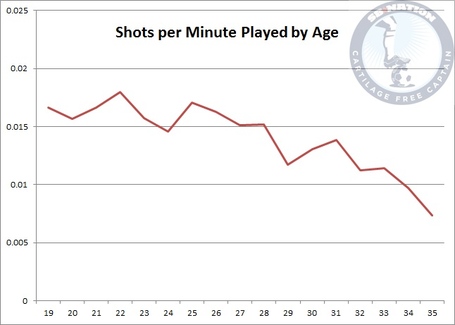 This graph, posted to the right, is a little less pretty than the above. Going by ratios can get a little bit messy. But as you can see here, players rarely get Premier League jobs at an early age unless they're expected to be a significant part of the team's attack, and over time players get more and more defensive responsibilities.

As an aside, I've limited the graph here to ages 19-35 because those are the ages for which I have a good sample of minutes played (at least 10000 total), and because the post-35 data is entirely skewed by the presence of Ryan Giggs. He makes up a huge percentage of the shots and minutes in the age 38-40 data, and he plays the attacking role of a 24-year-old. So to keep the graph from being Giggs-ruined, I've instituted the cut-off.

Here's what happens if you don't remove them: 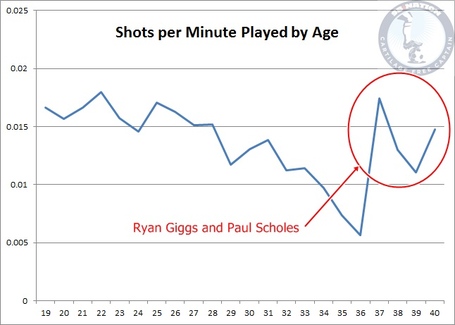 What Does This Mean For Tottenham Hotspur?

As I mentioned above, Spurs have one of the youngest rosters in the Premier League. A number of the players who have disappointed this year are still very much on the upswing of the aging curve. Lewis Holtby is just 23, Erik Lamela 21, Christian Eriksen 21. Gylfi Sigurdsson is 24, still looking ahead to his likely peak years. I think the fans often discount too much the importance of the aging curve. As much as Aaron Ramsey struggled last season, he was also a 22-year-old in the Premier League and big improvements are reasonably common at that age. Whereas if you have a 27-year-old, it's much more likely that what you see is what you're going to get.

Here's the team data. For average age I'm taking a average weighted  by playing time of the ages of all outfield players who have appeared in a league game this season.

We see Spurs right there with the most touted young sides in England, Villa, Southampton and Swansea. I think at the team level these numbers should portend good things for the future. Nothing is fixed, and certainly nothing is determined week to week. But I'm happy to see my club in the top rows of the chart rather than the bottom.