What Effect Is Scott Parker Having On Tottenham's Midfield?

There's been a lot of discussion about how good or bad Scott Parker has looked since Tottenham Hotspur lost Sandro to injury. I thought I'd take a look at some of the stats to see what if any effect Parker is actually having.

Share All sharing options for: What Effect Is Scott Parker Having On Tottenham's Midfield?

As you all know, I'm certainly no football expert. I don't watch nearly the amount of football that people like Kevin and Ryan do. However, I think I'm pretty good at spotting when players are performing poorly. That's why I'm pretty confident in my assessment that Scott Parker is playing poorly. Sure, he's running around the field and he's "putting himself about". He's doing some tackling and a little passing, but he's just not been good enough. There are a number of possible explanations for this though.

First and foremost, we must consider that Parker is a player adapting to a new role in a new system. He did not have a preseason to adjust to manager Andre Villas-Boas' tactics and, while he was eased into the team initially, he has since been thrown to the wolves due to Sandro's unfortunate injury. I firmly believe that Scott Parker is playing a role that he is both unsuited for and uncomfortable with. It is the combination of those two things, and the fact that Sandro performed so well in the season's early going, that are making Parker's performances seem much worse than they actually are. Because Parker is not the kind of player Tottenham need in this 4-2-3-1 system, I would expect more struggles from him.

Second, let's not forget that Parker is coming off of a pretty serious injury. Tom Huddlestone hurt his ankle and has not been the same since. I can only imagine what an achilles injury would do to a footballer. It was obviously an injury with a long recovery time, but we don't know how much it has affected his body and his game. Parker certainly doesn't look the same as he did under former manager Harry Redknapp, but that could be for any number of other reasons.

When I set out to write this post, the first thing I did was compile the statistics of Sandro and Dembele in each match they started together in the league and then did likewise for Parker and Dembele. I knew that the sample size for the Parker-Dembele partnership would be small, but I thought it merited a look. My goal was to show that Dembele performed demonstrably better with Sandro beside him than with Parker. What I learned is that stats are dumb and don't always tell the whole story.

As you can see, there's barely a difference. Dembele attempts a few more passes and makes a fraction more tackles and interceptions with Sandro in the lineup with him. Could this be down to sample size? Sandro played 12 league matches alongside Dembele. Parker, thus far, has played four. I think it's certainly a factor. With a sample size that small one aberrational game is much more likely to effect the statistics.Consider, for example, the most recent West Bromwich Albion match:

For most of the second half Tottenham played a man up. During the course of that match, Dembele completed 77/79 passes. That's at least 24 more passes than he's completed in any other game with Parker. Clearly, that game is the outlier so far. When you take that match out of the equation then Dembele completes almost 10 fewer passes at a lower percentage, though he does make slightly more tackles. I don't, however, think that a comparison over only three games is statistically significant. Sure, it's a convenient argument to make, but picking and choosing matches wasn't what I set out to do.

The next step was to compare Parker's performances directly to Sandro's in Premier League matches that they played alongside Dembele. Again, sample size is a bit of a problem.

Parker is attempting and completing more passes than Sandro, albeit at a much lower rate. Their respective tackling and interception averages are fairly similar as well. Parker's performances have been all over the place, so it's hard to tell if any of them are aberrational. He's attempted 48, 73, 87, and 66 passes in his four starts and had completion percentages of 81%, 75%, 93%, and 76%. His tackling and interception rates have been fairly steady though. Basically, this data tells us that Scott Parker attempts more passes, but is unsuccessful more often. I think that is fairly evident when you watch the matches though. Thus far we've learned next to nothing.

I thought maybe the best thing to do would to be to compare "similar" performances. Obviously, this is next to impossible as one football match never plays out the same as another. But there are some tools for comparing performances. Squawka compiles this stat called performance score. You can read about it here. It sounds interesting. My goal was to find a few games where Parker and Sandro had similar performance scores and then compare them. Here's the first pair of games: 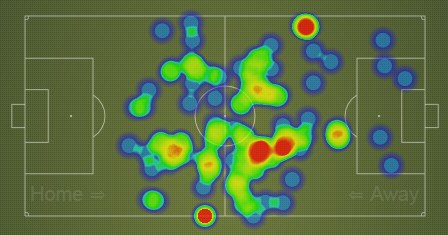 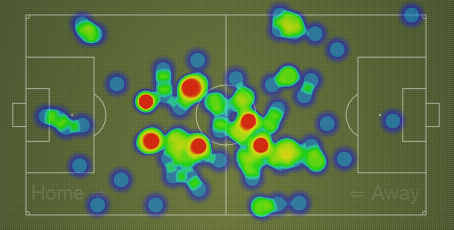 Both player had the exact same performance score in these matches. The red indicates areas of the pitch that the player spent the most time. As you can see, Sandro sits a bit deeper than Parker, but both got forward some. Parker spent a very minimal amount of time in and around his own penalty box (the away end) whereas Sandro was back there more frequently (the home end). Additionally, we see that Sandro tended to stay more central during his match, whereas Parker was all over. 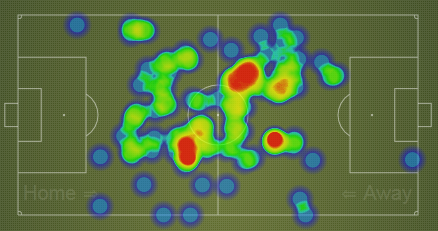 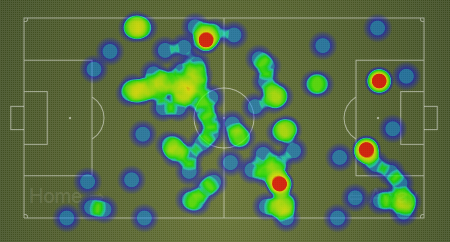 In this pair of matches Parker had a slightly high performance score (66 vs. 62). Again, we see Sandro spend more time in and around Tottenham's penalty area. Parker only entered the area once during the match (or so it would seem). Parker spent much of his game pushed further up the pitch, due largely to the fact the West Brom were down a man for nearly the entire second half. Tottenham had 70% possession at the Hawthorns as opposed to 55% at the Stadium of Light.

So, after all that, what have we learned? Basically nothing. We need more matches with Parker and Dembele together before we have any sort of statistically relevant way of comparing the two players. However, if you're using the eye test, like myself and several others, you'll not want to see Scott Parker playing too much more. I personally advocate for Jake Livermore over Parker, but I doubt that will be happening. Only time will tell.