Lewis Holtby finally got an extended runout in his preferred position in midfield. Here's a look at how he did.

When Lewis Holtby joined Tottenham Hotspur from Schalke 04 he was believed to be yet another player who's best position was in the hole behind the striker. However, following various interviews that Holtby has done since joining Spurs, it's become apparent that the German midfielder is actually much more comfortable playing a deeper role in midfield. Against Everton Holtby finally got a chance to play that position and did pretty well.

Andre Villas-Boas' preferred formation is a 4-3-3 and he has said all along that he doesn't have the personnel at Tottenham to use that formation yet. On paper, the formation Villas-Boas sent out against Everton looked like the usual 4-2-3-1, but in practice it played much more like a 4-3-3 with Mousa Dembele and Holtby working together in the pivot and Scott Parker sat deeper behind them.

Result aside, Holtby looked comfortable in midfield and he an Dembele seemed to have a good understanding and the two dovetailed nicely. Holtby was very active throughout the match, completing 92% of his 64 passes. He also completed 6 of 7 long balls and had 3 key passes (stats via Who Scored).While attacking Holby did well and he seemed to always be involved in the action and the buildup.

The one thing that I think we can all admit is that Holtby's defensive game is a bit lacking. He should be given credit for being energetic and constantly closing down opponents, but at times it pulls him out of position and leaves Spurs open in the middle of the park. Additionally, Holtby is not a very good tackler and he put in some pretty ugly tackles against Everton.

For purposes of comparison, let's look at some charts to show us how Lewis Holtby did in comparison to his fellow midfielder Mousa Dembele. 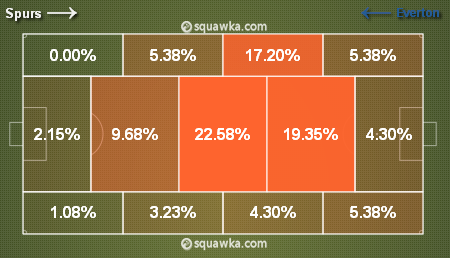 As we can see, Holtby spent most of his time in the middle of the pitch and out on the left. This makes a fair amount sense, when you see the Dembele's action areas are very similar, but skewed more to the right side of the pitch. In fact, Holtby spent more time deeper in midfield than Dembele did, which seems a bit counter to what I observed during the course of the match. 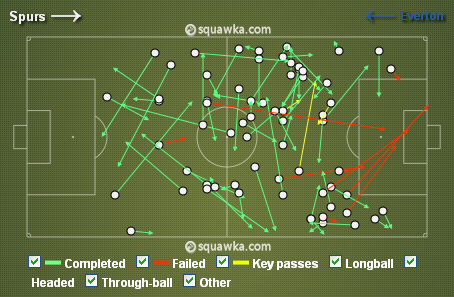 When we look at the passes that Lewis Holtby made we see that he made a lot more passes from deep in the midfield than Dembele did (see his chart here). Holtby also seems to be getting the ball (or at least unloading the ball) in more varied positions than Dembele. All in all I thought Holtby did pretty well. This was his first extended runout since the end of January and while he looked off the pace initially he seemed to settle down as the game went on.

This game, in mind,shows us that in Holtby and Dembele Tottenham have a viable pairing in the double pivot. Those two, paired with a more defensively sound Sandro (as opposed to Scott Parker) could certainly form a dynamic midfield. I'm not completely sold on Holtby being the best option in the center of the park for Spurs. I think Tom Carrol is probably better suited to the role, but I'm more than happy to have Holtby occupy the position for the time being.