Tom Huddlestone's Cameo vs. Everton And A Tactical Template for the Tottenham of the Future

In his short cameo at the end of Spurs' nearly-disastrous home tie against Everton, Tom Huddlestone provided his advocates with some long-needed evidence that he can not only do a job for Spurs in a 4-3-3 formation, but can actually be a gamechanger.

Share All sharing options for: Tom Huddlestone's Cameo vs. Everton And A Tactical Template for the Tottenham of the Future

Though Tottenham's recent 2-2 draw with Everton wasn't exactly an ideal result considering the current shape of the Premier League table, the developments of the game weren't all bad. At the very least, the side showed that they can just about cope in the absence of both of Gareth Bale and Aaron Lennon the two players that provide the side with natural width. As Bryan A. showed in a fine analysis piece today, Lewis Holtby also looked comfortable in his first full outing as a central midfielder for Tottenham.

A recurring theme across these points is that, as the weekend's experimentation demonstrated, Tottenham seem to have the personnel and squad harmony to make Andre Villas-Boas' preferred, but until now disregarded, 4-3-3 formation work. I want to provide another contribution to this discussion by looking at the performance of Tom Huddlestone against Everton, and argue that his insertion into said 4-3-3 on the day proved what many of us have suspected for a while- that the creative midfielder can still do a job for Spurs, provided the team around him is built to compensate for his deficiencies. Indeed, I feel Huddlestone's brief but vital appearance against Everton should in fact give AVB further pause for thought if he is already considering a full switch to this formation in the weeks to come and next season.

When Tom Huddlestone entered the pitch in the 75th minute of the Everton tie, it was unfortunately to a cacophony of boos from the home supporters. This reaction as provoked not so much by the feelings of the average Spurs supporter towards Huddlestone himself so much as by the confusion at his replacing Mousa Dembele, who had as ever impressed himself well upon the game up to that point with ambitious dribbling and take-ons. Clearly, taking out a player as vital to Tottenham's attacking efforts as Dembele was always going to precipitate some kind of tactical switch, and Villas-Boas opted to play Huddlestone in a deeper role, with Parker and Holtby shuttling in front of him, assigning him the key responsibility of spraying long balls forward to add to the directness of Spurs' offensive efforts.

Vitally for Tottenham's beleaguered side and their manager, this strategy worked. Huddlestone demonstrated immense comfort in this less dynamic, more withdrawn creative role, encouraging the full backs to bomb forward and bombarding Everton's very blocky defence. Below is a map of the passes attempted by Huddlestone during his brief appearance for Spurs, 26 in total, of which a highly promising 23 were on target, impressive considering the ambition of most of them. 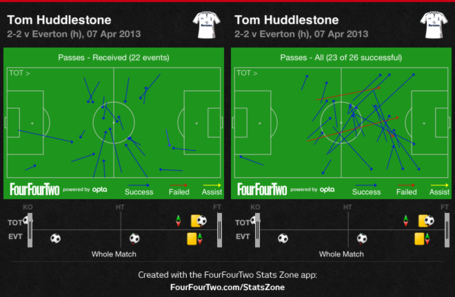 Eventually, Everton folded under this pressure, leading to Adebayor's missed chance which was turned into the equalizer by Gylfi Sigurdsson.

That Huddlestone suits the deep, regista-esque role considering his lack of mobility and incredible passing range should come as no surprise to anyone who's followed his evolution from centre-back to creative midfielder over the years. What is vital to take away from the game, however, is how inserting a withdrawn playmaker into the side in the spot which Scott Parker had previously been patrolling didn't damage the tempo or cohesion of Tottenham's game at all, instead promoting more aggressive attacking movement and helping Spurs to snatch, erm, non-defeat from the jaws of defeat.

Of course, much of how David Moyes approached the tie on the day made it easy for Tottenham and Huddlestone to enjoy a late, provident surge. Everton had deployed a tight man-marking system all game and looked to play on the break, allowing every Spurs player a lot of time and space on the ball. This strategy was merely intensified as Everton tried to protect their slender lead, meaning that Huddlestone was barely pressed for the ball in his efforts to orchestrate for the side.

Equally, however, it was still very intriguing to see how Tottenham looked when finally utilizing Huddlestone in a role that doesn't overstretch his abilities, ie. as part of a double pivot in AVB's well-worn 4-2-3-1. The closing stages of the game offered a tantalizing glimpse of a Spurs midfield which marries the skills of a regista, the legwork of a shuttler like Parker and the all-round game of a terrier like Holtby. More excitingly, it's easy to see how this game can be adapted thorough the inclusion of either Thomas Carroll or Mousa Dembele for Scott Parker to create a midfield with even more potential to dominate possession even against full-strength, hard-pressing opposition.

Hopefully, the positive effect of Huddlestone's cameo will give AVB as much cause to think about playing around with Sunday's formation to utilize him as it gave his supporters a modicum of vindication in their calls for him to remain with Spurs for at least one more season.