Television revenue figures for all of the Barclay's Premier League clubs has been released, unsurprisingly, Manchester United are on top.

Share All sharing options for: Premier League Television Revenue for 2012-13

The Daily Mail published the revenues for all of the Premier League clubs in 2012-13. The revenues are pretty big figures, but they will pale in comparison to what next year's figures will be. Manchester United led the pack with £60.8 million for 25 live television appearances. Former champions Manchester City came in second with £58.1m after being broadcast 21 times during the season. Arsenal generated the third highest revenue with £57.1m while north London rivals Tottenham Hotspur were fourth on £55.8m. 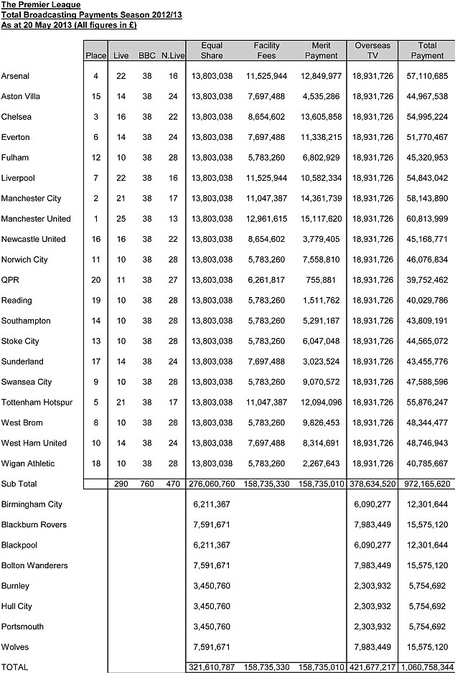 Perhaps the most surprising thing from this information is that Chelsea only had 16 live appearances on television, less than Liverpool and the same number as Newcastle. Last place finishers QPR still managed to bring in just under £40 million despite only playing on TV 11 times. In total, including parachute payments to relegate clubs, the television contract saw more than £1 billion handed out.

Next season, that amount will be even higher. The new TV deal for the Premier League could see clubs who only feature the minimum number of times on television (10) could stand to earn £60.8 million, while the clubs at the top could earn in excess of £100 million. The new television deal could result in an odd paradigm shift in the world of football. Even bad teams will have a considerable amount of money, certainly more than teams similarly situated in Spain, Germany, France, etc. What this will do to transfer spending and wages remains to be seen.