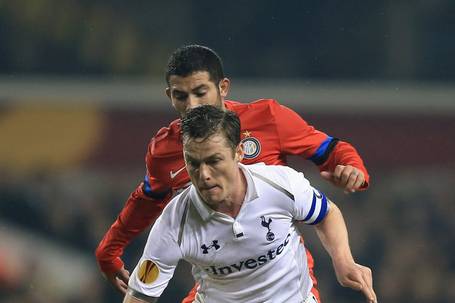 Sky Captain Parker faces a bogey on his six. Richard Heathcote via cdn0.sbnation.com

In a post earlier this week, MCofA considered the question of whether the Dembele-Sandro pivot was equal to the Dembele-Parker pivot. MCofA found that the pairings to be almost equal, with the caveat that the data he used was limited:

This isn't perfect, because I don't have time-series numbers and I have to roughly assign whole matches to one bucket or the other, even if a player was subbed off in the 70th minute. (I assign a match to the first two buckets if the two played together for over 60 minutes.)

For my analysis, I reviewed every Premier League or Europa League match in which Scott Parker started between January 20th and the end of the season. I chose to ignore the games prior to January 20th in which Parker himself was a substitute as he was only just regaining his fitness. I also chose to ignore FA Cup games due to the low quality of competition.

The above chart shows how Spurs have performed during Parker's 21 appearances since January 20th this season. Despite putting more Shots on Target (SoT) than the opposition, Spurs had goal differential of -4 during Parker's time on the pitch. On a per game basis, this would amount to 1.28 goals scored and 1.48 conceded. This compares poorly to the 1.74 goals scored and 1.21 goals conceded that Spurs averaged during the 2012-2013 Premier League season.

It is arguable that shots-on-target are a better measure of team quality than goal differerential. As MCofA explained in an early blog post:

One of the major insights of football sabermetrics is that shot-on-target conversion (the percentage of shots on target which end up as goals) is highly variable within a season for both players and teams. So to account for this variation, it is generally better to estimate the quality of a team's attack or defense based on the number and quality of chances rather than the outcome of those chances. Tottenham do very well on these underlying statistical metrics, better than Arsenal (or Chelsea).

I'm not as convinced that shots-on-target are a better better indicator of team quality than goal differential for every team, but it is at least worth noting the possibility that Spurs negative goal differential with Parker on the pitch could be a fluke, though 1818 minutes is hardly a small sample size.

This chart shows how Spurs performed in every minute Parker was not on the pitch since January 20th. Although the sample is small (11 games, 285 minutes), it is clear that Spurs performed significantly better with Parker off the pitch. In addition to scoring 13 goals and conceding 0, Spurs put 8 shots on target for every 3 they conceded. On a per game basis, this would amount to an average of 4.2 goals scored and none conceded.

What's more, it's not just one or two of the games skewing the results -- astoundingly, in every single game Parker was substituted, Spurs went on to equalize or score the winner after his substitution:

What does this mean for Spurs' season?

At a minimum, the above information indicates that Parker should have been substituted earlier and more frequently than he was this season. Indeed, Andre Villas-Boas seemed to notice this as well, substituting Parker in 5 of his last 6 appearances. Parker played every minute in 11 matches; Spurs won 5, drew 3, and lost 3. Substituting Parker in these matches - especially those in which Spurs were drawing or losing around the 60th minute - may very well have garnered Spurs the additional points necessary to overtake Arsenal for fourth place and the last Champions League berth.

Should Parker have started so many games?

This is a trickier issue to get a clear read on, as there was only one game in which Parker did not take part since he began his run in the team on January 20th -- away to Southampton. Spurs won that game but it is difficult to draw many conclusions from it - Mousa Dembele's early injury forced Spurs into a Holtby-Huddlestone pivot, which is not ideal for either player.

A01chtra has argued that Parker's presence wears out the opposition, thereby making it easier for attacking substitutes to have a big impact. He may very well be right, though I'm skeptical. At a minimum, the wear-your-opponent down strategy should not leave Spurs down a goal, as they were on 6 of the 10 occasions Parker was substituted (Spurs were tied with the opposition for the other 4).

This is hardly conclusive evidence that Parker should not have started so many games, but I think even A01chtra would agree that AVB should have experimented more, particularly in the Cup games, to see if Spurs would perform better with a midfield that didn't include Scott Parker.

If you don't think so, well, there's this.

What does this mean going forward? Does Sky Captain Parker still have a place in the team?

Recent transfer speculation indicates Spurs are considering switching to a 4-3-3 formation next season. Against strong teams, Sandro will be ideal at the base of a midfield three; against weaker sides, Tom Huddlestone or Tom Carroll will be great options thanks to their range of passing. As Windy explains, there is no place for Parker among the more attacking positions:

While Parker will likely no longer start, he still has a role to play for Spurs. As was mentioned in the press ad nauseam, Spurs had some issues with conceding late goals in the first half of the season. Not coincidentally, Scott Parker was not fit for any of those matches. Parker's tenacity, defensive acumen, and willingness to throw his body in harm's way make him the ideal player to close out, not start, for Spurs.

What should AVB do with Scott Parker next season?