Tom Carroll is the missing link needed to make this Spurs side tick.

Share All sharing options for: Tom Carroll must start against Chelsea if Spurs want a top four finish

After the departure of Luka Modric, we've seen several iterations of Spurs' midfield this season in an effort to fill the gap left by our Croatian magician. After the initial success of the Dembele-Sandro pairing was ruined by Sandro's injury, AVB has struggled to find a workable midfield solution. The Dembele-Parker partnership was rather uninspiring, and AVB's recent experimentation with a three-man midfield has yielded mixed results. The one thing AVB hasn't tried is building the midfield around Tom Carroll. And he should.

There's plenty of reasons to be skeptical. He's too young. He's too lightweight. He's untested at the top level. He's not as good as we think he is. Stamford Bridge is too intimidating. All of these might be true, and it still doesn't matter. Even if Tom Carroll starts on Wednesday and is only average, if he's average at doing the things he does best, it will make us a better team. How well he plays is significantly less important than how he plays.

On Saturday we partnered Tom Huddlestone with Mousa Dembele, and then Lewis Holtby after Dembele was forced off with injury. First let's take a look at the contributions from Hudd's partners: 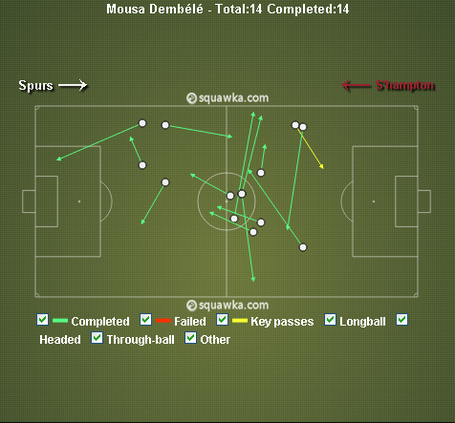 Dembele only lasted 38 minutes before his removal, but there's still some info we can glean from his performance. First and most obvious, he completes all of his passes, which is nice. But if you look at the passes he's making, they're overwhelmingly negative, with most passes going sideways or backwards. His passes are also fairly infrequent, averaging a pass attempt only every 2.7 minutes. 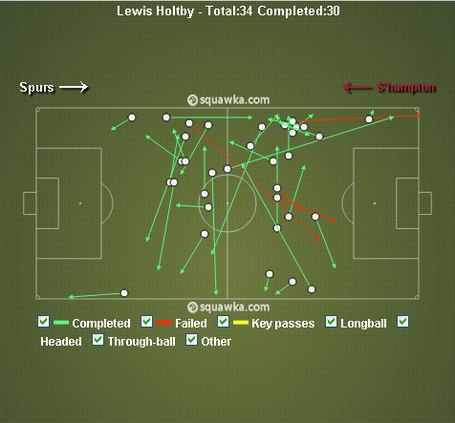 Holtby replaced him for the next 55 minutes or so. Like Dembele, most of Holtby's passes are incredibly negative as well. He emerges with a tidy completion number of 88%, but very few of those passes are progressive. His few attempted ambitious forward balls align almost perfectly with his misplaced passes. The majority of his impact on the game came from passing the ball backwards. On the plus side, he was much more involved than Dembele, averaging a pass attempt every 1.6 minutes.

Tom Huddlestone was the other member of our two-man midfield. We all know he's a wonderful long passer of the ball. But if you take his long passes out of his game, here's what his contribution looks like: 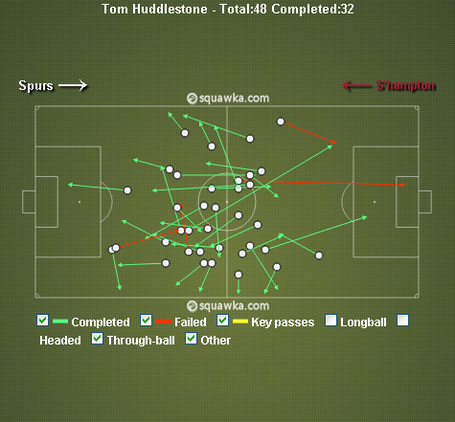 He manages 32/36 short passes for an 89% pass completion rate. But again that seemingly excellent passing statistic is belied by the incredible number of negative passes. I count six that actually go forward. Now I may have missed a few, but it's clear that moving the ball quickly and progressively is not what Huddlestone is good for. So let's take a look at his long balls. 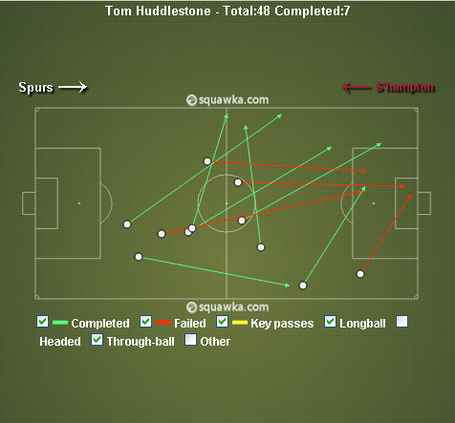 He went 7/11 on the long ball. And only 5 of those are really moving the ball forward instead of sideways. Is it worth building the side around a guy whose biggest strength happens about 5 times a match? Even if his 4 misplaced long balls indirectly led to opportunities for the team, that's still only a positive long ball once every 10 minutes. (Against City, where he was significantly better, his passing still looks very similar: frequent passes backwards punctuated by three long balls and the assist for Bale).

Let's take a look at Tom Carroll, and see what he does differently. 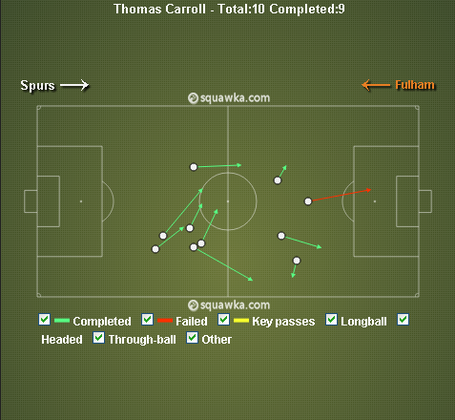 Here's little Tom's first ten minutes against Fulham (his longest Premier League cameo to date). We can see some immediate differences here. First, he's completed 90% of his passes. But unlike everybody else, except for one sideways ball, every pass is moving the ball forward. Second, he attempts a pass once every minute. Significantly more frequently than Dembele's 2.7 minutes per pass, Huddlestone's 1.9 minutes per pass, and even Holtby's 1.6 minutes per pass. 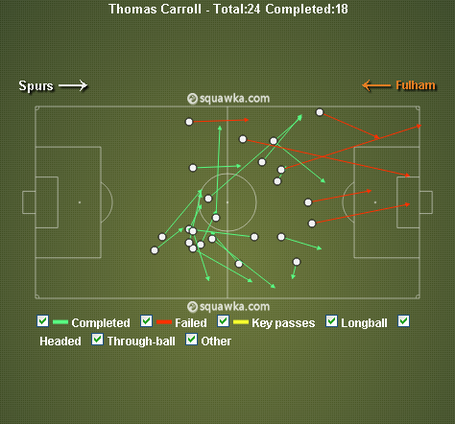 Over the next 15 minutes, every single pass he makes is a forward one. His completion rate dips as he attempts more ambitious passes into the box from higher up the pitch, but this is a product of chasing the game down a goal, and less a product of Carroll's natural game as a footballer. Meanwhile, Carroll has maintained his pass per minute pace over the course of his appearance.

Now to put some of this in context, Southampton was pressing very aggressively against Spurs while Fulham was sat deep protecting a lead. Heavy pressing will naturally lead to players passing sideways and backwards as forward outlets are closed down, and a team sitting deep will invite forward passes. But alongsideCarroll against Fulham was Scott Parker, who we all know loves to get forward more than he should. Under the exact same circumstances he made 3 forward passes and 10 sideways or backwards passes. So while some of Carroll's forward-looking passing can be explained by circumstances and written off by the cynical reader, it's still clear that he's naturally inclined to look for a quick forward pass.

What Carroll gives us that other players don't is a guy in midfield who looks to get on the ball frequently and keep the ball moving. When he gets the ball, he tries to move it quickly and progressively up the pitch. So how does this help us? Playing him alongside Parker would be the closet approximation to last year's midfield as we can get. Even if Carroll isn't as good as Modric, we've seen how that type of midfield works, and how it benefits the team. I trust you understand the intrinsic benefits of quick, forward passing. But let's say we're not comfortable handing the team's creative reins to a kid on his first EPL start away at Stamford Bridge. What's his value then?

Besides the skills that he brings to the table in his own right, he would significantly improve Huddlestone's game in either a two-man or three-man midfield. As we've seen, Hudd looks for the long ball, and if it's not on, ends up dropping the ball backwards. Carroll likes to get on the ball often, almost twice as often as everybody else we have in midfield. If you watch Carroll's off the ball movement, it's exceptional. Whenever somebody else has the ball, he's showing for the ball and making himself available for a short outlet pass.

With Tom Carroll alongside Huddlestone, when Huddlestone doesn't have the long ball on, instead of going backward he can move the ball to Carroll, who will more than likely be standing nearby and available for a pass. And since we know Carroll likes to quickly move the ball forward, he'll then be able to move the ball up the pitch to our dangerous attacking midfielders. If Chelsea are intent on pressuring Huddlestone to stop his dangerous long passing, they'll be left to contend with Carroll's quick metronomic passing instead.

Any other midfield selection leaves us likely to replicate our turgid performances against Wigan and Southampton. Timid, negative passing, while we wait for an opportunity to punt the ball forward. The knock-on effects of this strategy are numerous. First, the attacking players stop moving because they stop expecting the ball. You can only watch your midfielders pass the ball back to the goalkeeper so many times before you stop running around expecting the ball. Secondly, you end up with this: 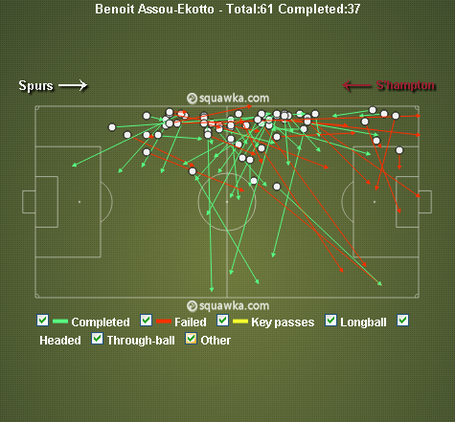 That's right. Assou-Ekotto was our most creative and frequent passer of the ball against Southampton. With nobody in front of him making an effort to get the ball forward, our erratic left-back took matters into his own hands. Fair play to Benny for making an effort, but 60% passing as he whacked the ball forward in frustration isn't doing the team any good. We need a guy in midfield who can move the ball quickly and effectively. We need Tom Carroll.

(All images via Squawka)