The Blame Game: The Search For Culpability Against Chelsea

In any given match there are a number of people to blame for a result. In this piece I single out the players who were must at fault for Tottenham Hotspur yesterday.

Share All sharing options for: The Blame Game: The Search For Culpability Against Chelsea

Football is a funny old game. I mentioned on Twitter last night that I find it funny because two people can watch the exact same game and come away with completely differing opinions on who performed well and who didn't. I'm not sure why that is. Probably, it is a product of what each person is looking at in the game. What you're looking for may be different than what I'm looking for. Obviously, that makes you wrong. So, I've decided to put my proverbial pen to this figurative paper and show you exactly who you should be harsh on following last night's match between Tottenham Hotspur and Chelsea.

Ok, so right away we can see at least three people that screwed up on this set piece. First, as Clive Allen pointed out during the broadcast of the match, is Emmanuel Adebayor. Adebayor's job here is to plant himself at the top of the six-yard box and clear any ball that comes near him. He doesn't have to mark anyone, he just has to get his head on the ball. As you can see from the GIF above, he fails to do so rather miserably. If Adebayor does his job right then this isn't an issue at all and nothing comes of it.

Some have made the argument that Michael Dawson is equally at fault here. I don't see it, but I'll address it. Dawson's job here is to say goal-side of Cahill and prevent him from making a run into the six-yard box to nod home. Does Dawson give Cahill too much space? I don't think so. Dawson does just about everything he can and might have been able to put Cahill off of the header if he hadn't been picked by Torres (I think) and Huddlestone. Regardless, the ball never would have gotten this far if Adebayor does his job.

The final person at fault on this is Scott Parker. Scott Parker gets caught ball watching while marking a man on the far post off of a corner. I mean, that's some basic level stuff right there. I know Scott Parker is an old head, and very experienced, and yadda yadda yadda. This mistake here is something that gets you yanked from a U-12 match. I'd try to analyze just what Parker is doing, but I can't because I have no freaking idea. He's got a hand on Oscar and the Oscar slips behind him and Scott doesn't even notice. That's downright embarrassing.

Ok, this GIF doesn't really show the build-up to the goal, so please refer to this video. At one point three Chelsea players are bunched near the sideline with three Tottenham defenders around them. However, Chelsea aren't really hemmed in and as a result Jan Vertonghen pulls over to close down some space. At the exact moment Vertonghen sucks over, Torres bursts past Benoit Assou-Ekotto and the Belgian centerback has to scramble to change directions. When Jan left his position he left a gaping hole in the defensive line and it was easy for an unmarked Ramires to burst through that space and fire the ball into the far corner.

So, who's fault is this? Well, I've already mentioned what Vertonghen did. Though, there's not much wrong with it. The other three Spurs players (I think Holtby, Huddlestone, and BAE) weren't doing much to close down play and as a result he felt like he had to commit to that area as well. Sure, the space that he left is where Ramires eventually went, but as a defender you're always relying on other players to fill spaces. The next "mistake" that Jan makes is attempting to lunge in on Torres. I'm not sure what else Jan could have done here, aside from scythe down Torres.

Again, we have to look at Scott Parker. Parker, as you can see in the video was caught way up the pitch trying to pressure David Luiz. As a result, Ramires, (his man) is about 10 yards behind Parker. So, when Torres bursts free Parker has a lot of running to do in order to catch up and because Ramires has a good deal of pace Parker is never going to catch him and a goal is scored.

In my mind, this goal is mostly on Parker. He's pushed too far up the pitch trying to pressurize Luiz. Pressing Luiz doesn't do much. He makes odd decisions even when he has time and space. Here, with Parker pressuring him, he made a smart decision and laid the ball of immediately nullifying Parker. This is the kind of mistake we wouldn't see from Sandro because he's more positionally and tactically sound.

The Game As A Whole

Now that we have the two goals out of the way we can look at the entirety of the match. For me, three players stand out as being particularly bad. Scott Parker, for the reasons mentioned in the two above sections was awful. Sure he had a decent pass completion rate and made a few good tackles, but that doesn't get you out of being culpable for both of the oppositions goals. Scott Parker has been bad for months and this is just a continuation of that. Hopefully, next season Parker sees less of the pitch than he has this year.

Then there was Benoit Assou-Ekotto.The Cameroonian leftback completed a paltry 72% of his passes in this game. And many of them gifted possesion to Chelsea in advantageous positions. His passes consistently were cut out by Luiz and Ramires and those two quickly fed the ball to the Chelsea attacking midfielder on Assou-Ekotto's side who was already well up the pitch. These mistakes left the Tottenham defense scrambling at times and only some good covering from Vertonghen, Dawson, Walker, and Huddlestone, kept BAE from making a mistake that led to a goal. 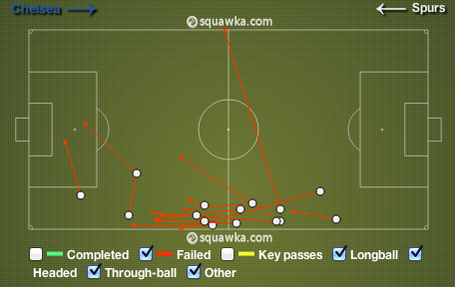 Assou-Ekotto was also dispossessed three times in the match. Only Adebayor was dispossessed more, but as a striker that's something that can be forgiven. For a leftback to have the ball taken away from him three times, especially when it happens in vulnerable positions is unacceptable. Additionally, in the second half, when the game became stretch, Assou-Ekotto was consistently out of position on counter-attacks. Admittedly, pretty much everyone was out of position at one time or another in the final 20 minutes of play, but it seemed like it was Assou-Ekotto who was most often caught in the wrong place at the wrong time.

Perhaps the worst player on the night, however, was Lewis Holtby. I've seen people praising his performance, but I don't see it. I know what the people who liked his performance saw though. They saw one shot on goal that skidded just wide and they saw that he was credited with an assist. They also saw, that Holtby ran around a lot and was "working hard". Apparently, that is enough to qualify someone for a good performance.

In reality, running around like a chicken with its head cut off is not enough for a good performance. Holtby's presence on the pitch was actively hurting Tottenham Hotspur and that is the real measure of whether or not a player had a good or bad game. Holtby's shot wasn't that far off, but Cech had it covered, so let's not give him too much credit for that and his "assist" was a three foot layoff to Adebayor who then ran 40 yards with the ball and took an incredible shot. The fact that Holtby gets an assist for that is ridiculous. As for Holtby's "hard work", that was what hurt the team the most.

Like Parker, Holtby struggles with positional awareness. He has no problem buzzing around up the pitch, pressuring central defenders and goalkeepers when they have the ball, but when he has to apply pressure to a midfielder, like Luiz or Ramires he was nowhere to be found. Additionally, Holtby is often too agressive. I can't count the number of times I saw him overrun what could have been an easy tackle because he was being too agressive. Holtby hasn't figured out how to play within this system, how to funnel the ball into tight spaces and get possession for the team and as long as he continues to be out of position he will put too much pressure on his teammates, especially when he's played in the same team as Scott Parker.

Finally, let's address Holtby's work on the ball. According to Who Scored, Holtby was dispossessed three times. If these giveaway had happened in the attacking third, then perhaps they wouldn't be an issue. However, Holtby all too often gave the ball away in the midfield and in dangerous positions that put his teammates under pressure. Look at some of his failed passes. 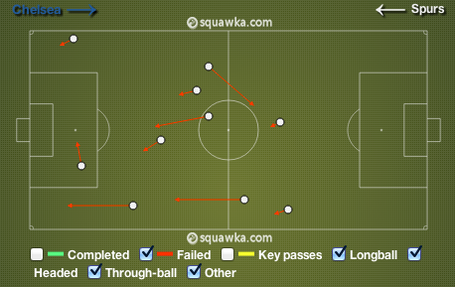 Three of them are in Tottenham's half! That's absolutely ridiculous, especially for an attacking midfielder. You absolutely cannot give the ball away in your own half. For comparison's sake, Scott Parker gave the ball away twice in his own half, no other player did it more than once and Tom Huddleston, Jan Vertonghen, and Michael Dawson (three of the players on the ball the most) didn't do it at all. Holtby only completed 75% of his passes, and I'm willing to forgive some of the ones in the attacking third, but the ones in our own half were a detriment to the team.

Tottenham did a great job of coming back in this match yesterday. They may have been aided by a questionable offside call, but they managed to get a point. I can't help but wonder what might have been if so many players in the team hadn't been actively hurting our cause. I think Holtby and Parker's play was the best argument for Tom Carroll we've seen all season. Those two were atrocious. Tottenham Hotspur now have two games remaining and it's up to manager Andre Villas-Boas to find the right squad in order to take all six points. Here's hoping whoever we pick doesn't make the same mistakes as were made against Chelsea