Australian midfielder Massimo Luongo has already made his first team debut for Spurs, but could his future hold a lot more appearances at White Hart Lane? We think so.

The list is starting to get to players who could be Premier League players before long. Yesterday, we had Christian Ceballos who, thanks to YouTube, many believe could be a great player. The next player on our list doesn't have nearly as many YouTube highlights and isn't the product of Barcelona's youth academy, but has the potential to be a Premier League player nonetheless. 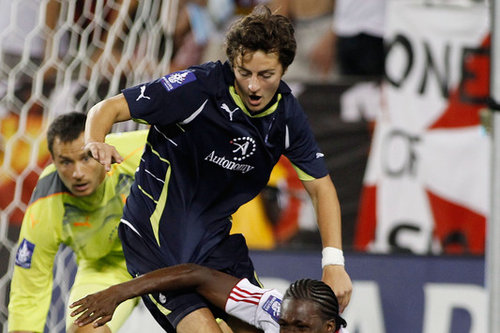 See the rest of the list here with profiles for Zeki Fryers, Souleymane Coulibaly, and Ryan Mason

Massimo Luongo is a 20 year-old Australian midfielder who joined Tottenham Hotspur in January of 2011 after a successful trial. He went on to make nine appearances for our u-18 side that year, scoring three goals. The midfielder gained a reputation for being a quality passer as well as a capable tackler. His goal scoring ability marked him as an excellent all-around midfielder who had the capability of playing just about any role in the center of the park.

The following season, Luongo made his first, and thus far, only appearance for the Tottenham Hotspur first team, coming on as a substitute for Sandro in the then Carling Cup against Stoke City. If you remember that match, the thing you probably remember about Luongo is that Thomas Sorenson saved the debutant's penalty in the shootout, thereby handing Stoke a 7-6 victory on penalties. For Nostalgia's sake the Spurs players who scored penalties in that game were (Defoe, Townsend, Corluka, Kaboul, Livermore, and Carrol). Luongo's miss wouldn't have mattered nearly as much if Roman Pavlyuchenko hadn't taken one of the worst spot kicks ever. After the match, Harry Redknapp and Tony Pulis both expressed sympathy for the youngster. Redknapped, in typical fashion blamed Pav, saying that at least Luongo had "the bottle to step up and take one." Pulis added, "At least he had the strength of character to go up and do it. I thought he played well. He looked a decent young player."

In 2012, Luongo went on loan to Championship side Ipswich Town. Luongo made 11 appearances and scored 1 goal for the Tractor Boys before new manager Mick McCarthy terminated his loan in November. Luongo returned to Tottenham where he played a little in the U-21 Premier League, but then in March he went back out on loan, this time to Swindon Town in League One. Luongo made 9 appearances for Swindon and even scored a goal in the League One Playoffs, Luongo gave Swindon hope by scoring a beautiful goal, but committed a late foul that gave Brentford a penalty in the first leg.

What can he do?

As mentioned above, Luongo is a capable passer and tackler in midfield. He's essentially the proto-typical box-to-box style midfielder. He's not a fantastic dribbler, but he has pretty good control in tight spaces and his passing ability more than makes up for any lack of ability when running with the ball. Luongo is best when he can play beside a more creative player and in front of a more holding player as he often did for the Tottenham U-21 side. Luongo moves the ball along quickly and rarely dwells in possession.

He's not a big physical specimen. He is built like an Australian Scott Parker, though with worse hair. To be successful in the Premier League he'll have to get a little bit stronger on the ball, but he seemed to show more of that last season than he had in previous years.

Where can he go?

Luongo performed well at every level he played at last year. It's unfortunate that Ipswich Town didn't keep him around. The Tractor Boys only finished six points above relegation and the players used in their midfield instead of Luongo (Andy Drury and Luke Hyam) weren't nearly as good as the Australian. Given that I'd say another season in the Championship would be best for Luongo. He'll be 21 in September and getting consistent minutes on the pitch is what he needs most for his development right now.

Eventually, Luongo has the potential to become another Jake Livermore-esque player. At 21, Livermore spent a season on loan in the Championship, the next season, at 22, he made 38 appearances for Spurs. That's the ceiling for Luongo, I think. He can be a capable contributor on a good team like Spurs, though having him as a constant starter for a team in the hunt for Champions League football may be a bit much. Regardless, the young Australian has a future in the Premier League.