Young striker Harry Kane is number seven on our list. Might he be the answer to Spurs striking woes? Probably not.

Yesterday, my colleague, Ed, waxed eloquent about Shaq Coulthirst and what he could potentially become. Young Shaq is good and has bags of potential, but today's player, Harry Kane, is ready to contribute to the first team right now.

See all the prospect profiles here 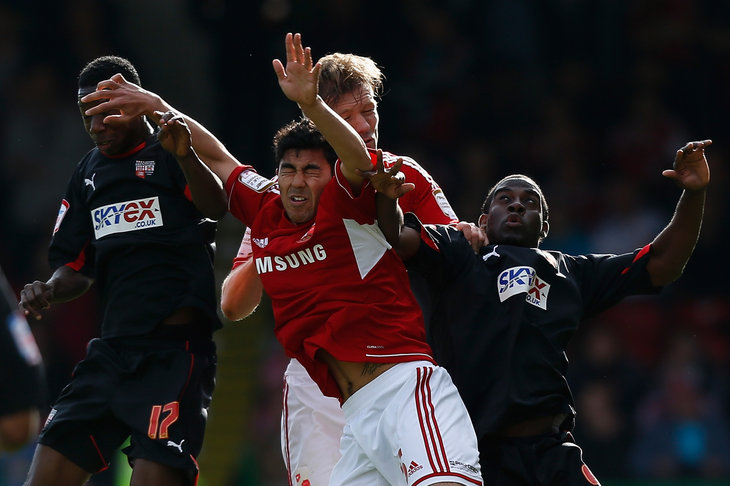 Well, aside from being a time-traveling wunderkind, "Hurricane" Harry "Sugar" Kane a.k.a. The man of a thousand nicknames, is a 19, soon to be 20, year-old footballer who plays mostly a second striker. Yes, that's right. Kane, who it seems we have been talking about for the last 10 years, is not even 20. Only a year older than Coulthirst, our number 8 prospect, Kane is much further along in his development. He spent the later part of 2011-12 on loan at Millwall in the Championship, earning the team's young player of the year award in the process. Last season, he went on loan to Norwich, but injuries hindered him greatly and he made only 6 total appearances before returning to Spurs and then subsequently going back to the Championship, this time with Leicester City.

Kane made his professional debut at the age of seventeen while on loan at Leyton Orient in League one. He has since gone on to make 7 appearance in a Tottenham shirt, six of them during the 2011-12 Europa League campaign. During that time Kane scored his first goal for Spurs in 4-0 away victory over Shamrock Rovers in that competition. In his stints at Leyton Orient, Millwall and Leicester Kane has scored 14 goals, most of them while at Millwall. It's not a terribly great return from the youngster given the number of matches he played, but for someone in his role it's not bad.

This summer Kane is with the England U-20 team at the World Cup in Turkey. He has been capped 18 times at various youth levels and has scored 8 goals.

What can he do?

Can, despite his size (6'3" and 185 lbs), is not a line-leading striker. Kane is much more comfortable in the role of second striker or attacking midfielder. His time at Millwall was particularly productive because of the partnership he formed with the more advanced Andy Keough. Kane possesses a good first touch and some decent finishing ability. He's scored some pretty good goals in his professional career and he's still developing.

One good thing about Kane is that despite his size, he's a pretty decent dribbler. Kane is a little gangly and it seems like he's still attempting to gain a bit more mastery over his body control, but in tight spaces the youngster seems to quite well. This is important because in other physical aspects, speed, strength, etc. Kane is pretty average. He's not going to beat many defenders with his quickness and he's not going to just overpower them, so he's going to have to be smart about his positioning and technique.

Kane still needs some time to work out the mental side of the game, but I think all of that really comes from experience at the top level. With his current skills, Kane is capable of playing well in the Championship, but he needs to develop his movement and positioning when away from the ball to really bring his game to the next level. When I've seen Kane he seems to work hard, so that's not a problem, he just needs to channel that effort into making useful run into the right spaces. It's something we see Jermain Defoe still working on, so it shouldn't be too much of a hindrance.

Where can he go?

Kane is ready to play in the Premier League right now. There's no reason that a club like Cardiff, Hull City, or Crystal Palace couldn't use Kane right now. Crystal Palace especially need striking reinforcements and a season-long for Kane would be a big boon to the club. I'd love for the youngster to stay at Tottenham Hotspur, but he's not going to get minutes in the Premier League and this stage in his development playing 6 Europa League games and maybe a couple games in the Carling Cup isn't going to be nearly as useful as a loan stint would be.

In terms of his ceiling, I'm going to try to be more realistic than my colleague who compared Coulthirst to Carlos Tevez. As I said, Kane is a Premier League player right now. His ceiling is probably "capable Premier League striker". You know, that guy that can go out and score 12-15 goals for a mid-table team. Basically, he's Steven Fletcher who has had seven consecutive seasons with at least 11 goals. I know that doesn't wow you, but not every player gets to be Dimitar Berbatov or Francesco Totti, which if I was going to wax eloquent would be who I would compare Kane to.