The pressure of being at the top was difficult to deal with, but Tottenham Hotspur held their own.

Share All sharing options for: A Football Manager Story: The late-season swoon

Unfortunately, that's not the way things played out. Tottenham Hotspur had been bitten hard by the injury bug all season and the latter half of the season didn't see that changing. First I lost Sandro, then Younes Kaboul, then Hugo Lloris, and finally Gareth Bale. The loss of Lloris probably hurt the most. I'd managed to plug in Jake Livermore, Steven Caulker, and Andros Townsend to replace the other three, but Brad Friedel just couldn't cut it in my team.

The first game without Lloris, we lost 2-0 to West Bromwich Albion at White Hart Lane. It was only our second league loss of the season, but you could see some of the lads' heads drop knowing that we had just dropped three easy points in our title chase. Fortunately, that match was followed by two Europa League games and FA Cup match against Bournemouth. We pushed through and won those three matches and then beat Fulham and Southampton resoundingly.

Things finally started to come undone in mid-April. Things in the league were tight. All the teams in the top five were within two points of the top, the difference was, that my team was the only one still competing on multiple fronts. The foremost of those fronts was the FA Cup. A domestic trophy was something I badly wanted in my first season and with the spending I'd done, there was no way I shouldn't come away with a trophy. In the semifinal at Wembely we took on Blackburn Rovers and, man, did we get stunned. After 5 minutes Blackburn were up 2-0 through Rubin Rochina and Jordan Rhodes. Gareth Bale and Gylfi Sigurdsson got us back in to the match before halftime. I encouraged the team to push on and get us into the final. We were on top for much of the second half, peppering the Blackburn goal with shot after shot. It seemed certain that we would eventually score, but in the 91' Rochina broke through our defense and slotted past Friedel. There would be no domestic trophy for us.

After the loss in the FA Cup Semifinal we had to recover quickly because a Europa League semifinal against Napoli was looming. Unfortunately, it went even worse than the FA Cup. We lost 4-1 in the first leg. Edinson Cavani and Marek Hamsik proved to be too much for the team. After the first leg, we lost to Chelsea in the league, and then drew 1-1 at White Hart Lane in the second leg of the Europa League, going out 5-2 on aggregate.

There were only four matches left and three of them were away from home. The only match that we would play at the friendly confines of White Hart Lane would be against Arsenal. We required 3 goals in the last 15 minutes, two from Emmanuel Adebayor, in order to overcome Sunderland and the Stadium of Light, but we managed to beat Everton comfortably the following weekend. In midweek, we took on Arsenal. The buildup to the game was quite intense. We were only a point ahead of our rivals and the media were doing everything the could to advance the narrative that we hadn't finished above Arsenal in many years.

In the end, the narrative didn't matter much as the two teams played out a bore 0-0 draw. We maintained our one point advantage heading in to the last day of the season. The standings looked like this: Chelsea were in first on 81 points, followed by myself and Manchester United on 80. Arsenal were in 4th with 79 points and Manchester City were in 5th with 76.

On the final day we lost at Aston Villa. Among the goal scorers for Villas, one Alan Hutton. Chelsea and United won handily, as did City. It all came down to whether West Brom would help us out by beating Arsenal. Fortunately, Romelu Lukaku hates Arsenal and he scored a first half hattrick to see of Arsenal and ensure our 3rd place finish. Chelsea won the league, completing a "quadruple" with the European Super Cup, Club World Cup, and Capital One Cup. The best thing that happened, was that by viture of their superior goal differential, City pipped Arsenal for fourth, ensuing that the Gunners would be playing in the Europa League the following season. 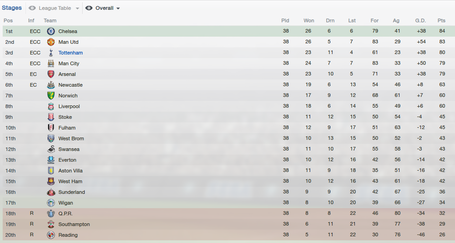 Gylfi Sigurdsson and Gareth Bale were my leading scorers with 15 and 13 goals respectively. Each also contributed double digit assists. The players who had the two best seasons were Sandro and Younes Kaboul, however, only one player from Tottenham garnered a post-season award and that was Lloris. The French goalkeeper took home the Barclays Golden Gloves for his 18 cleansheets on the season and was also named to the Barclays Team of the Season.

After performing pretty well, Daniel Levy saw fit to offer me a new £70,000 per week contract through 2017. I was entering the offseason trying to figure out how to upgrade my squad. I wanted to obtain a new back-up goalkeeper and a reserve defensive midfielder. I was still trying to offload Aaron Lennon and I wouldn't mind getting rid of Emmanuel Adebayor and Jermain Defoe, but it would take a good offers.

Based on scouting reports, Mousa Dembele was probably the worst member of my first team, but the Belgian had had a stellar season, scoring 10 goals and notching 7 assists. I was perfectly happy to continue with him in the center of the park alongside Moutinho, but I was going to be watchful for a good deal on a better player.