Share All sharing options for: Tottenham team news: Rose 90% to play against Chelsea

In a shocking move, the club has actually released information about a few of our injured players. Ahead of Saturday's clash with Chelsea, Andre Villas-Boas has given us an update.

In terms of team-news, Andre says Danny Rose has 'a 90% chance' of returning to action. Kaboul is a doubt, Capoue back after internationals

Etienne Capoue looks to be progressing right on schedule to meet the four to six week timetable set for his recovery after picking up an injury against Arsenal. Given Spurs' wealth of options in midfield, the ever-improving partnership of Dembele and Paulinho, and the gradual return to Beasthood of Sandro, Capoue can be wrapped in cotton wool and take as much time as he needs to get fit.

Younes Kaboul has been injured for so long that most of us are more surprised when he's on the pitch than when he's off it. He's suffering from a slight groin injury at the moment, so at least it's not a recurrence of the knee problems that saw him miss most of last year. The sooner Kaboul can get healthy and return to the imperious form that made him one of the best center backs in the league a couple years ago, the better.

The biggest worry is whether or not left back Danny Rose can get fit in time to play. It's strange to say, but Danny Rose has somehow become Spurs' most irreplaceable player. After witnessing Kyle Naughton's horror-show against Cardiff City last weekend, not even a 90% chance of seeing the return of Rose will be comforting enough for most supporters.

'We’ve looked solid at the back, not just clean sheets, but the amount of opportunities allowed. We’ll have to show that ability again'

More impressive than the one goal Spurs have conceded in all competitions this year is the 7 chances allowed per game Spurs have averaged so far, the fewest shots conceded by any team in Europe's major leagues 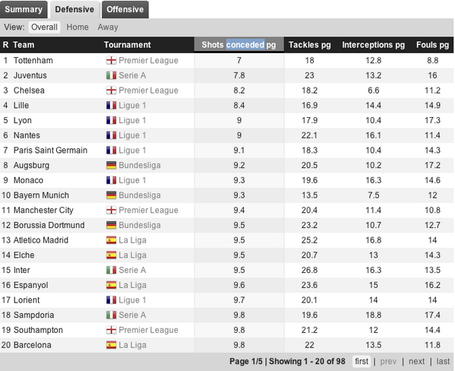 Spurs are going to need to stay strong at the back this weekend to keep out Chelsea's 87 attacking midfielders.