Tottenham Hotspur vs. Chelsea, Man of the Match: Mousa Dembele

With the summer arrivals of Paulinho, Etienne Capoue and Christian Eriksen and the upturn in form of Gylfi Sigurdsson and Lewis Holtby, up until a few weeks ago we were questioning Mousa Dembele's place in this Spurs side. Now, he's almost indispensable.

Share All sharing options for: Tottenham Hotspur vs. Chelsea, Man of the Match: Mousa Dembele

Last week, when putting him forward for CFC's weekly Working Class Hero title for the match against Cardiff, I praised Mousa Dembele for paring back his all-action impulses and transitioning into an lynchpin role for Andre Villas-Boas' new-look Spurs team. When faced with a sterner test against Chelsea this past weekend, however, the Belgian stepped back up to the plate and put in more of a classic Dembele performance, bossing the midfield more visibly in an often frenetic, physical game.

Up to this point in the season, the development of the Paulinho-Dembele pivot in Tottenham's midfield has seen Mousa take more of a supportive role to his Brazilian counterpart, covering a lot of ground all over the pitch but acting mainly as a ball-winner and recycler in order to allow Paulinho to bomb forward and join the attack. Saturday's match against Spurs' West London rivals nominally saw this approach utilised again, with Dembele spending fractionally more time in the defensive third of the pitch as Paulinho pushed up further into Chelsea's half.

In terms of where the influence of both players was felt, however, the picture is a little more complex, as the passing maps below illustrate. In possession, Paulinho completed most of his passes in the centre of midfield spreading play out to the wings; Dembele, by contrast, presented a much greater threat whenever he was on the ball, attempting more frequently than his pivot partner to get the ball to a teammate in more advanced, dangerous zones and managing a key pass into the Chelsea box. Interestingly, all of this happened despite Dembele and Paulinho receiving the ball in more or less the exact same places on the pitch throughout the full duration of the match, thus negating to some extent the possibility that Paulinho was simply too busy attacking the box to influence the game in the same way as Dembele. Straightforwardly, it appears that Mousa was simply making more of a mark all over the pitch than his partner. 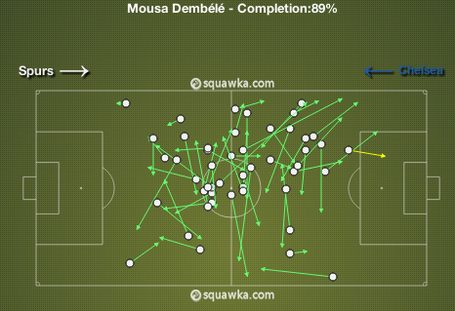 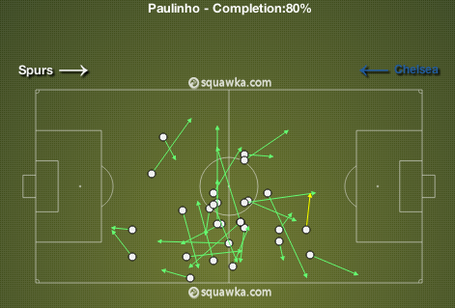 This chance creation aspect of Dembele's game was the icing on the cake of a performance that saw him also win all four of his tackles, turn over possession responsibly with an 89% pass completion rate, intercept two passes and beat his man with a stunning 8 dribbles. Add it all up, and it's plain to see that Dembele did absolutely everything on the day for Spurs, creating a platform for the team to build on with tackles and turnovers as he has every game this season, but also providing the attacking impetus and Spurs attempted to stay on top of a Chelsea side that refused to turn over. In the same match, he performed the roles of water-carrier and playmaker with aplomb. It was an old-fashioned all-round performance from a midfielder that shows his manager and the fans a new dimension to his game every time he plays 90 minutes in a Tottenham shirt at the moment.