The duopoly of Spanish football hasn't been broken since 2003-2004. In the last ten seasons in La Liga, only four times has the next-best club finished within ten points of either Barcelona or Real Madrid. This season Diego Simeone's Atlético Madrid have kept pace with the megabastards through the first half of the season. They are tied with Barcelona on 49 points in first place, behind only on goal difference. Atléti stand five points above their traditional rivals Real Madrid. And this weekend Atlético host Barcelona at the Calderón, with not just a run at the duopoly but possibly a run at their first title since 1995-96 on the line. There is excitement.

I am building shot matrix databases for the other major European leagues, and I'm currently working through La Liga. Atlético Madrid have perhaps the most fascinating and peculiar statistics of any club I've run across, and I want to share some facts.

First, they really are this good. They have a +36 goal difference and have allowed only 11 goals in 18 matches. Those defensive numbers aren't just random chance, I have Atlético with the second best expected goal difference in La Liga after Barcelona.

Second, that quality is slightly obscured in some of the more traditional stats. Atlético are solidly third in La Liga is shot difference and TSR. They are +89 in shot difference with a .608 TSR. Those are great numbers, but notably behind Barcelona (+118, .633) and Real Madrid (+138, .623). To see how excellent Simeone's club have been, you need to burrow down a bit into the underlying stats. I think they're pretty cool.

Basically, Atlético Madrid are the best side in Europe at creating high-quality chances for themselves while denying high-quality chances to their opponents. They are exceptionally disciplined in attack and rarely attempt low-expectation shots. Despite having the third-best ratio of shots for and against, Atlético have the best ratio in La Liga of danger zone shots for and against. In my favorite stat, they lead La Liga with the fewest shots allowed from the danger zone (46) and they have taken the fewest shots in La Liga from outside the box (70). They only give up bad shots, and they only take good shots.

Their tactical strategy seems mostly uncomplicated. Atléti sit deep and defend centrally, preventing chances either through the middle or, especially, in behind the defense. They hit quickly on the break when the opposing defense is not yet settled. For a tactical analysis of Simeone's side, I recommend this article by Jamie Adams, particularly focused on their defensive structure and style of pressing.

This article is a statistical look at all the peculiar effects that Simeone's tactics have. In the first table, the stats here are shots and shots on target, for and against, broken into three categories. "DZ" is the danger zone, the close and central areas of the 18-yard box. "W" is wide, the wide areas of the 18-yard-box. And "SoB" are shots from outside the box. I list first the attacking numbers and then the defensive numbers. For more on these zones, see my earlier Shot Matrix study.

Atletico's 46 shots allowed from the danger zone is 33% fewer than their closest competitors Espanyol, Barcelona and Real Madrid. They have allowed only 24 shots on target from inside the box in 18 matches, a ridiculous rate of just 1.33 SiBoT allowed per match.

As you can see, shooting from outside the box is reasonably common in La Liga, but Atlético Madrid take fewer shots from distance than anyone else in the league. They are disciplined, and they wait for better opportunities. This translates into both the highest average shot quality for shots taken and the lowest average shot quality for shots allowed. Here's a graph. (For an explanation of my shot quality metric, see my earlier shot matrix piece and the links therein.) Shot quality is a rough estimate of expected goals per shot. 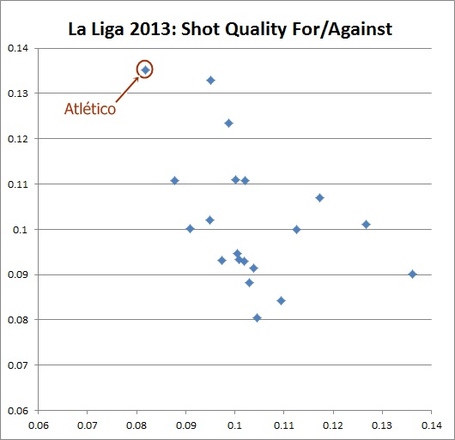 If you'd rather see that data in tabular form, this is percentage of shots from inside the box and from the danger zone, and rough shot quality for defense and attack for all clubs in La Liga.

This is particularly notable for the weekend because Barcelona of course love to play through-balls. They have 21 shots assisted by through-balls in the league so far, the most in La Liga. Barcelona's high defensive line does allow for the occasional pass in behind the defense, and they often don't have men back to get in the way of a shot when the ball comes deep. Atlético Madrid, by contrast, have an extremely high defensive blocked shot rate, an effect of all those defenders they pack into the box.

While Barcelona play more through-balls than Atlético, they also allow some, while Atlético allow basically none. Barcelona have a pretty normal rate of shots from the danger zone which are blocked before reaching the keeper, while Atlético are among the lowest in the league. Barcelona's defensive rate of shots blocked is again unimpressive, while Atlético stand among the league leaders. Barcelona play a high line and possession football, which allows the defense to set but risk the occasional counter-attacking chance within their own end. Atlético play a low block and concede possession, packing the box with defenders to prevent or block shots.

This weekend's match looks to be a real clash in styles between two absolutely elite football clubs. Not only that, but Atlético's style is pretty much specifically designed to make trouble for a possession-oriented side like Barcelona. I can't wait for the match.