With the season more than half done, clubs are starting to set points benchmarks. How many points saves us from relegation? How many points gets us a title or a Champions League berth? Using my projections, I have projected some magic numbers.

"Be happy, we just avoided relegation," went the joke on Saturday. Tottenham Hotspur's win over Crystal Palace gave Spurs 40 league points, traditionally the benchmark for safety from relegation. This got me thinking. How many points do you need to avoid relegation? With a big pile-up of clubs at the bottom of the table, it seems to me that it probably won't take 40 points this year to climb up to 17th. At least three of these sides are surely going to end up playing very badly in the second half.

A similar discussion has been going on toward the top of the table. How many points does Manchester United need to make up if they plan to repeat their title run? That looks terribly unlikely now, of course. But how many points do they need from the second half to make a crazy run? To answer that question, of course, we'd need to first set a benchmark. How many points wins you a title?

Using my projection algorithm, I can estimate these benchmarks. I ran a million season simulations and for every club, I logged their point total and whether they (a) won the title, (b) finished top four, and (c) finished outside of the relegation zone. In this piece, I'll go through that data and consider for each club the points per match they need to take to finish with a 50% of higher chance at their goal.

In my projections (coming tomorrow), I still have Manchester City as big favorites to win the title, but all of Arsenal, Chelsea and Liverpool still have significant shots as well. Everton and Tottenham still have technical title shots, but little more than that. With so many top sides competing, it's probably going to take a big point haul to win the title. Here's a chart. 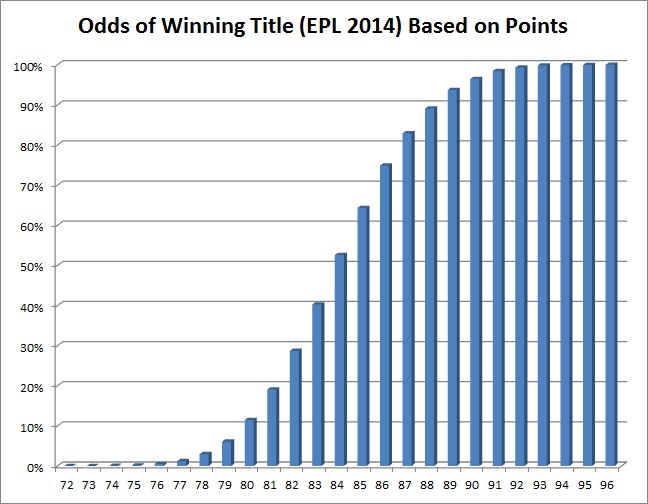 As you can see, it's probably going to take well over 80 points to win the title, and I had many simulated seasons (~10%) where a club got 88 or 89 points but failed to take the championship. There are too many good teams this year, and even more, there are too many bad teams. With so many sides at relegation level, I have a good number of simulated seasons where more than one of the title contenders just runs the table on their weaker opponents.

So what's our magic number? This is subjective of course, but I like a number that gives you a notably better than 50% chance at achieving your goal. I have a 53% chance of winning the title at 84 points and 65% at 85 points. So I'm going with 85 points as our title benchmark. How many points per match do the contenders need to take to get there:

United need a basically impossible point total. Liverpool's needs are pretty insane too, but as I described last week, my stats love them some Liverpool.

Spurs are still in this one, though I rate them as having only an outside chance. Once again, with seven high-quality clubs dueling for four positions, and with a relegation race including at least eight or nine really quite bad teams, it's probably going to take a lot of points to get into the Champions League. 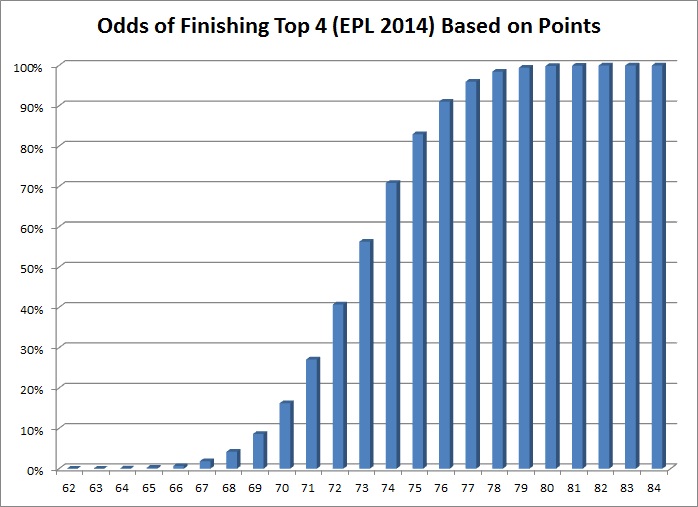 Last year it took Arsenal 73 points to snatch the fourth Champions League berth. This year I rate a 73-point season as earning only slightly over a 1-in-2 chance at the top four. It looks like it's going to take 74 to get well over 50%. And once again, I had a significant number of simulations in which 75 or 76 points still wasn't enough.

So then, with 74 points as our semi-arbitrary magic number, how many points per match will it take to get there?

That's a nice round number for Spurs. Take two points per match from this point on, that's 74 points and a 70% chance of finishing top four. That's a high bar to cross, of course, but in the Premier League as it currently exists, finishing top four in a big task. You can see here the value of the lead that Arsenal, City and Chelsea have built for themselves. My stats continue to be relatively unimpressed with Chelsea, but the lead in actual points that they've accumulated will be difficult for any of the trailing sides to overcome.

I have no idea what's going to happen here. This week Cardiff City have fallen to the bottom of my rankings, but they'll have a new manager to make changes and new signings joining shortly. Crystal Palace have achieved Pulidean cromulence in recent weeks. Sunderland have been pretty good too, Fulham have at least been scoring goals, and West Ham United still seem too talented to me to go down.

The effect here mirrors the effect at the top. Where it takes more points than usual to win a stratified league, so it also takes fewer points that usual to stay in a stratified league. While none of the relegation sides this year approach Reading's level of futility, there are so many of them that just by random variation alone, three of the relegation battlers are likely to take 15 points or fewer from the final 17 matches. 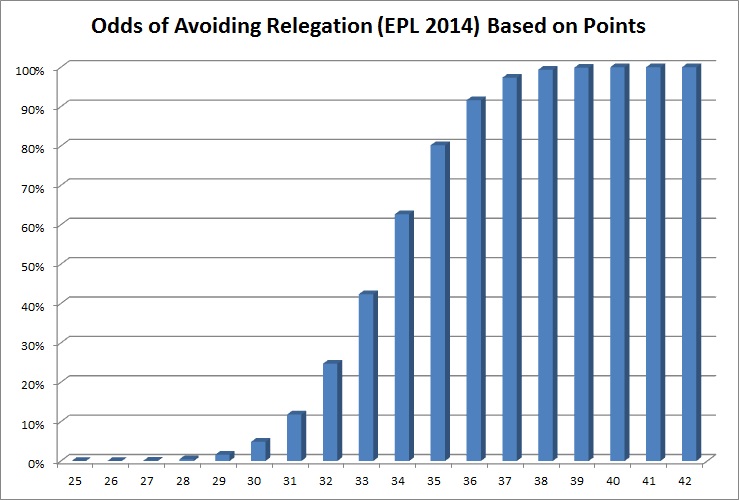 There were seasons in which just 31 points were enough to snatch a 17th place finish. A club can feel mostly secure at either 34 or 35 points. I'm going to run the numbers here at 35, even though 34 might be a little more in keeping with the magic numbers chosen above. When the cost of losing is so high, I think you should set the benchmark a little bit higher. So 35 it is.

In my projections, I have both Swansea and West Brom with no more than negligible chances at relegation. I think this chart helps show why. Just a point per match in the second half of the season puts the Swans and the Baggies safely on the route to the 2014-2015 Premier League season. These are not terrible clubs, and that should be more than achievable.

Again, this is the points needed just to get to a point total of 35, which gives a roughly 4-in-5 chance at remaining in the league next year. It seems doable, but it won't be for everyone. I have no idea which clubs will fail to make the climb. It will be fascinating to watch.